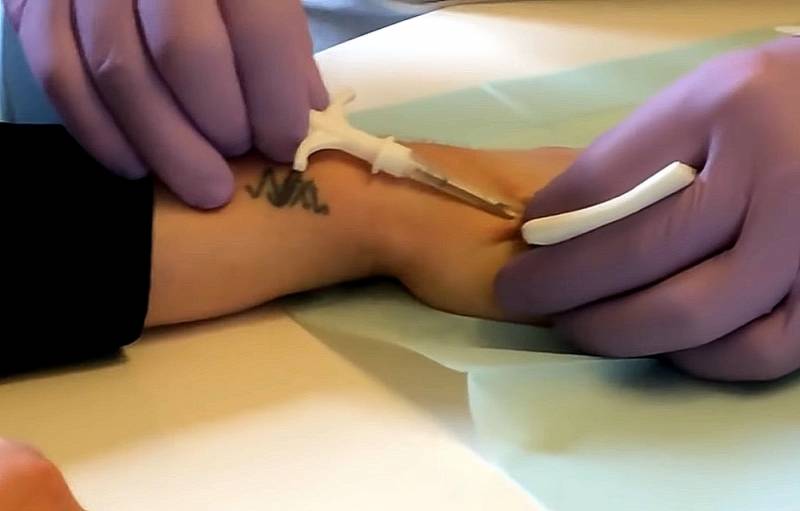 In the not so distant past, all individuals used mostly cash for any of their personal payment transactions, as an option and a sign of a special “Western civilization” - checks and check books. With the advent and mass introduction of microchips, plastic cards have become an equivalent (and for many, preferred) payment method. Progress does not stand still, and in recent years, direct payments using only a mobile phone have become increasingly popular.


But in the foreseeable future, citizens may no longer need to carry any “payment instruments” with them at all. It will be enough just to reach out and swipe "where required" with the palm of your hand to easily make a payment. The fact that this has ceased to be an invention of science fiction writers and a vague promise of futurologists is reported by the British BBC portal and written by the rather massive (because in Chinese) Taiwanese online publication DQ Earth Atlas.

Not yet "cyborgs": who are "biohackers"

37-year-old Dutchman Patrick Paumen calls himself a "biohacker" because in recent years he has implanted 32 different microchips into his body. When making purchases, he may not take a mobile phone, credit card or wallet with him at all. One movement of his left hand - and the payment is successful, because back in 2019, Patrick was injected under the skin with a microchip for contactless payments.

Worried about forgetting your wallet or credit card when you leave the house? With a microchip in hand, you don't have to worry about it anymore.
Powman demonstrates his exemplary "advertising-consumer" contentment on Twitter.

And he adds that he "loves the stunned look on the store cashier's face" every time he makes a payment.

Looking back to 2019, the Dutchman explains: he implanted an inductive payment microchip under the skin of the palm of his left hand. It cost him about 200 euros. He is optimistic about microchip implantation in humans, citing the widespread practice of chipping pets as an example.

When pets get lost, we can find them with chips
reminds me of Paumen.

The pet chip uses a radio frequency identification (Radio Frequency Identification, RFID) system, which is usually used in plastic cards or electronic "keys". The built-in ID of the microchip has a limited range and must be in the electromagnetic induction zone of the sensor that reads it for activation.

How the technology of "human chipping" developed

In 1998, Kevin Warwick, a British engineer and researcher at Coventry University, became the first person in history to have (on his own initiative) a glass capsule containing a microchip with an RFID tag implanted in his arm. However, this foreign body only lasted nine days in Warwick's body.

Thereafter technology “human chipping” did not develop much for a long time, until in the mid-2010s the first companies began to appear (in the USA, Great Britain, Denmark, Sweden) that put this process on a commercial footing. In particular, the British biotechnology company Walletmor, which provides people with a microchip implantation service for inductive payments, has taken up this line of business.

The microchip for contactless payments allows you to buy alcohol on the beach in Rio de Janeiro, Brazil, coffee in New York, fashion in Paris, or anything else at a nearby store.
says Wojciech Paprota, founder and CEO of Walletmor.

The inductive payment microchip offered by the British company weighs less than 1 gram and looks slightly larger than a grain of rice. It does not require the use of batteries or other chargers. Paprota says implanting a microchip is almost like injecting drugs or vaccines. Previously, this procedure took more than 20 minutes, now microchips are embedded in the palm of your hand faster - in just 15 minutes.

The microchips of Walletmor, Alipay, Pay Motor and other emerging brands use NFC (Near field communication) technology, a set of standards for short-range wireless data transmission, that is, between devices located at a distance of about 10 centimeters. These standards have been approved since 2004 and represent the same technology that is widely used in mobile payments via smartphones.

Walletmor guarantees its customers safety: according to the company, a person “does not feel discomfort” immediately after the implantation procedure, and the chip itself will be securely fixed in the hand. But inserting a payment device right into the palm of your hand is still a new concept for many and raises natural concerns. What people are most worried about is that as technology advances, microchips will become more advanced and will be able to carry more personal sensitive information. This is fraught with problems with personal security, because even the specific location of everyone can be easily traced.

Fintech expert Theodora Lau notes that the microchip for inductive payments is essentially an evolution of the Internet of Things, although it is raising new controversy over the exchange of personal data. She believes that as a payment method it is easier and more convenient, but people also need to weigh the pros and cons of such progress, especially in the field of privacy and security.

Who owns this data? Who gets access to them? And is it ethical to chip people like pets?
Lau asks. The result, she warns, could be "depriving the rights of the many for the benefit of the few."

This opinion is supported by Nada Kakabadze, a political scientist and specialist in management and ethics, professor at the Henley College of Business at the University of Reading in the UK. She also believes that microchips should be handled with care.

This technology has a dark side and is likely to be abused. For people who don't care about freedom, this technology opens up tempting possibilities to control, manipulate and oppress others.
Kakabadze warns.

In Sweden, chipping people has long been popular, this service, under the assurances of "convenience" and "complete safety", extends to various areas of everyday life. For example, the Swedish company Biohax offers microchip implantation services that provide travel on suburban trains of the Swedish National Railway.

The COVID-19 epidemic has significantly accelerated the advancement of microchip services. Swedish start-up DSruptive Subdermals has activated giving people the opportunity to present vaccination certificates or screening reports after implantation of the appropriate chip. Hannes Sjoblad, general manager of the company, said that as long as the mobile application is used, the contents of the microchip are able to be updated. This information can be added every day, such as uploading a resume to LinkedIn today and adding a COVID-19 vaccine certificate tomorrow.

DSruptive Subdermals has developed another microchip that, once implanted, can be used to measure body temperature with a mobile phone and act as a thermometer. Sjoblad explained that the cost of implantation is about 100 euros, and thousands of people in Sweden already use this service.

If you understand how this thing works, you will see that it cannot transmit messages on its own, it is mostly passive. It cannot tell you where you are, and you can see the contents of the chip when you touch your smartphone - it indicates that it is not used as a tracker
– reassures users of Sioblad.
Reporterin Yandex News
Reporterin Yandex Zen
3 comments
Information
Dear reader, to leave comments on the publication, you must sign in.