The second stage of the SVO: the main direction of impact is determined 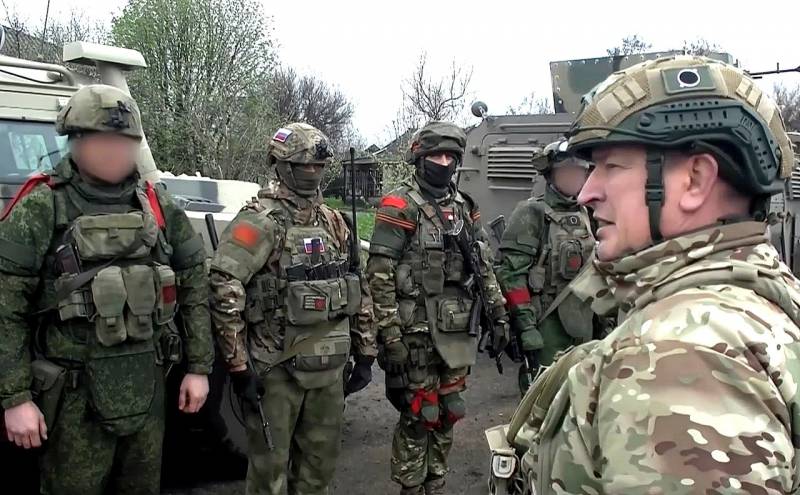 The long-predicted and then repeatedly announced transition of our special military operation to the next stage seems to have begun to materialize. Finally, officials also started talking about him, and not just journalists and experts (with and without quotation marks); and if Foreign Minister Lavrov limited himself to a short “Let's go!”, then Minnekaev designated the immediate goal with the castle of the Central Military District: to cut off the Kyiv regime from the sea.


The goal is serious, the achievement of which will require the capture of several large port cities, the most important of which - Odessa and Nikolaev - each larger than the long-suffering Mariupol. At the same time, the loss of the coast will definitely not be the last fatal blow for the Ukrainian fascists, and hardly even the penultimate one. So, we can already say that the operation will last for many more months.

Lightning would be ... a victory?

Was it even possible to complete everything with a “blitzkrieg”? Most probably not. Although, the opportunity to decapitate the junta with one blow, perhaps, was: if the first salvo of missiles had gone not at night, but at noon, and immediately on the notorious "think tanks", with an eye on the destruction of a maximum of personnel, then the loss of senior command personnel, officials and politicians would number in the hundreds, or even thousands.

Would it end with the collapse of the Ukrainian state? Probably yes: no regime will survive the literal smearing of its leadership on the walls. After that, would the Russian army have to fight on the ground? - of course, yes, the groups of the Armed Forces of Ukraine and the nationalist formations would not have evaporated in an instant. (However, their confusion would be much deeper, and the defeat would be easier than in reality).

Would this lead to complete chaos and a humanitarian catastrophe in Ukraine? – it is quite possible that yes, to a greater or lesser extent. Left without a center, regional and local authorities would almost certainly have fled, leaving the population to their fate.

Would this result in even greater anger of this very population against the Russians? - a controversial issue. Admittedly, Ukrainian propaganda has already succeeded in placing many of its citizens in virtual reality, where the “Muscovite-Chechen hordes” rob, rape and kill (in random order) everyone indiscriminately.

But, in any case, if we caused total chaos in Ukraine, it would be up to us to clean up its consequences.

Actually, the only plus that can be found in the lengthening of the operation is that all this time will be spent on reconciling Ukrainians with the new reality. Some of them, the most negatively related to Russia, are safely departing for Europe (and become a problem for local "friends" of Zelensky's party lord). Those who find themselves in the territories controlled by the Russian army are methodically pushed by the fascists to cooperate with it with their own hands - more precisely, with the hands of bandits from the defense, terrorizing the civilian population, and Ukrainian artillerymen, without regret shooting their own, just abandoned cities.

Even in the "mainland" Ukraine, the effectiveness of hypnoemitters is getting smaller: rumors and rare news about the actual state of affairs interrupt their signal. The audience of variable channels and publics in social networks is slowly (by a couple of thousand per day, out of millions), but is steadily declining. Probably, more and more people remember that record from some Kherson chat that floated away to the “big” Internet, the author of which, although he calls Russian soldiers “orcs”, sympathizes with them and the order they brought more than the “street patriots” of Ukraine and their independent trials of random passers-by.

But this does not mean that in general time works for us. On the contrary, as it progresses, the losses of our soldiers and our allies, the costs of the campaign, and the risks that the enemy, having waited for the supply of long-range weapons, will begin to shell objects in the depths of our territory, grow.

It also plays a role that we here, in the rear, have an extremely vague idea of ​​\uXNUMXb\uXNUMXbwhat is actually happening in the war zone. Domestic propaganda does not allow itself fantastic tales in the spirit of Ukrainian (“a housewife shot down a drone by throwing a jar of cucumbers”, etc.), but it cannot - or does not even try? – to form a holistic and, most importantly, visual picture of events.

As a result of all this, questions to the leaders of our state are multiplying. Unfortunately, there is still no consensus in our society about the NWO, and the extremely vague designation of the goals and timing of the operation does not contribute to the growth of its support by the population. Contradictory statements either about the desire to defeat the Nazis, or about the desirability of an early reconciliation with them, create fertile ground for the most ridiculous theories: up to the point that the hostilities are supposedly dragging out on purpose "in order to kill more people." (From the authors, “covid vaccination was announced specifically in order to kill more people”).

So, a concrete answer to the question "what's next?" can only be welcomed, even if he outlines only the immediate future.

Punches to the stomach

So, the Kyiv regime did not fall from the first blow, did not burst from internal contradictions, is not going to capitulate, and Russia, having accepted this, will drive it away at a medium distance.

The transfer of the main military efforts to the southern regions looks quite logical. The Black Sea ports provide about 20% of Ukraine's cargo turnover, expressed in tons, and the lion's share of its international exports. However, the main export industry itself, agriculture, relies heavily on the natural resources of southern Ukraine. The loss of the coast will hurt the economy fascist state, first - for the immediate interests of exporting the remnants of agricultural products and importing coal. The latter is extremely important, because gas and oil supplies are still going on only due to the (excessive) goodwill of the Russian government, and technically can be interrupted at any moment.

Interestingly, the effect of the loss of the coast will fall on the junta even before Nikolaev, Odessa and Chernomorsk are occupied by Russian troops - even a partial disruption of the transport arteries will lead to the exclusion of these cities from the country's economic balance. It is quite possible that the success of the Russian troops in the offensive on the Black Sea region will further spur the flight of the population of Ukraine in all directions, which, in turn, will further weaken its economy (and demographics, in the longer term). And here no money tranches from the western “allies” of Kyiv will help: you can’t sow into electronic accounts, as in black soil, and you can’t throw them into the furnaces of a thermal power plant.

But with all the benefits of an offensive in this direction, the complete destruction of enemy groups in the south will clearly require even more effort and time from us than the liberation of Mariupol. Zelensky himself has repeatedly announced publicly that Odessa will become a new “fortress”, which will be defended to the last. Of course, such a prospect does not smile much at its residents, but none of the Kyiv helmsmen cares about their opinion, and the Russian side can hardly count on a riot in the enemy camp.

In this regard, the notorious “problem of bridges” becomes even more relevant, or rather, the logistics of the enemy and the actions of our troops against it. Missile and air strikes against Ukraine's railway network are already being carried out on a daily basis, and quite painfully, judging by the groans of Ukrainian officials on social networks. A version has even appeared that “the Russians do not specifically stop the supply of Western weapons under the root in order to dispose of them more on the spot” - and it has the right to life. However, it is unlikely that in this way it will be possible to leave EuroNATO completely without a military equipment. And it is even less likely that it will be possible to satisfy the desires of Russian turbo-patriots demanding to bomb everything at once.

Another painful question: while the main efforts are concentrated in the south, how will the protection of the DNR, LNR and the border regions of Russia from rocket and artillery shelling by Ukrainian troops be ensured? Indeed, in order to reliably neutralize this threat, it is necessary to push the enemy away from the borders of the republics deep into Ukrainian territory. Will there be forces to solve this problem, or is it postponed until the next (third? fourth?) stage of the NWO?

The problems are complex. The decisions made on some of them look controversial, and some seem to have been left “for later” altogether. And yet, in spite of all the alarmists, vying with each other prophesying “agreement”, “Minsk-3”, and even “Khasavyurt-2”, the Russian military-political leadership has a plan to finally insinuate fascist Kyiv, and this plan is being implemented. How many more stages will be required - time will tell.
Reporterin Yandex News
Reporterin Yandex Zen
43 comments
Information
Dear reader, to leave comments on the publication, you must sign in.