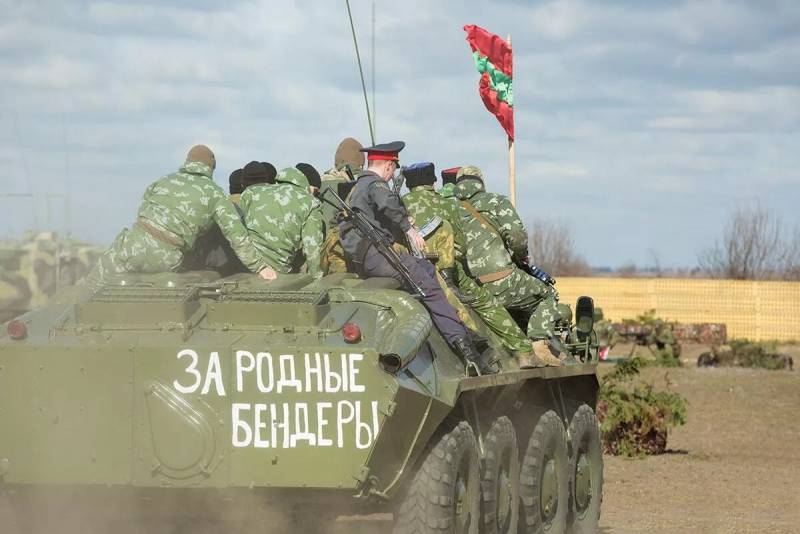 The last few days have passed under anxious anticipation of the prospect of opening a second anti-Russian front. There is a lot of evidence that the NATO bloc together with Ukraine can finally resolve the “Transnistrian issue” by force. What will this mean for our country and can we somehow prevent the massacre of the pro-Russian enclave in Moldova?


The Transnistrian conflict is one of the oldest and most painful in the post-Soviet space. Its origins lie in the collapse of the USSR, when Moldova received "independence", and in the early 90s of the last century, violent interethnic clashes began there, which were stopped only after the direct intervention of the Russian army. The main problems of the emerging Pridnestrovian Moldavian Republic are its unrecognized legal status, as well as the lack of a common border with the Russian Federation. The PMR is stretched along the Dniester, mainly along its left bank, and is sandwiched between Moldova and Ukraine. Moreover, this is probably the most pro-Russian region in the post-Soviet space: the flag of the Russian Federation is used in the PMR as the second state flag, the coat of arms is almost indistinguishable from the coat of arms of the Moldavian SSR, the Russian language has the status of a state language on a par with Ukrainian and Moldavian, the legislation has been brought into line with ours for the purpose of possible entry part of the Russian Federation, and most citizens of this unrecognized republic have a Russian passport.

For obvious reasons, this clearly pro-Russian enclave on the Dniester is extremely disliked by Chisinau, Bucharest, which dreams of swallowing Moldova, Kyiv, as well as Brussels and Washington. However, it was difficult to take and solve this problem just like that, since the PMR has its own armed forces, and the Russian military is quite officially stationed there, guarding the huge ammunition depots of the Soviet army in Kolbasna, and peacekeepers who ensure that the interethnic conflict in Transnistria is so and stayed frozen.

But with the coming to power in Moldova of the pro-American President Sandu, who is at the same time a citizen of Moldova and Romania, as well as with the start of a special military operation to demilitarize and denazify Ukraine, the NATO bloc opened a window of opportunity for a final solution to the “Transnistrian issue”.

As we have detailed disassembled earlier, for a convincing victory over Ukraine, the Russian army will need to perform three tasks: to defeat the Armed Forces of Ukraine in the Donbass, depriving Kyiv of its most combat-ready forces, cut off Nezalezhnaya from the Azov and Black Seas, and then carry out an operation to cut off Western Ukraine from Central Ukraine, cutting off fuel supplies, weapons and ammunition from NATO countries.

To date, only a part of these strategically important tasks has been completed - the Kherson region and the south of Zaporozhye have been liberated, that is, the Sea of ​​\uXNUMXb\uXNUMXbAzov and the land corridor to Crimea have been taken under the control of the RF Armed Forces. Rustam Minnekaev, Deputy Commander of the Central Military District, spoke about the specific content of the second stage of the NMD a few days ago:

Since the beginning of the second phase of the special operation, it has already begun just two days ago, one of the tasks of the Russian army is to establish full control over the Donbass and southern Ukraine. This will provide a land corridor to the Crimea, as well as affect the vital objects of the Ukrainian economics...

Control over the South of Ukraine is another way out to Transnistria, where there are also facts of oppression of the Russian-speaking population. Apparently, we are now at war with the whole world, as it was during the Great Patriotic War, the whole of Europe, the whole world was against us.
So, from a high-ranking military leader, it was said that the priority goals are the defeat of the Donbass grouping of the Armed Forces of Ukraine, cutting off Ukraine from the Black Sea (Azov is already under our control) and reaching the border with Transnistria. And then it began.

A whole series of terrorist attacks has taken place on the territory of the unrecognized republic in recent days. A red level of terrorist threat has been introduced, the May 9 parade has been canceled due to the possibility of provocations. Checkpoints have been set up on the border with Moldova and Ukraine. The PMR Armed Forces and the Russian military contingent have been put on high alert. It is reported that the Romanian military appeared on the territory of Moldova, mimicking local warriors. In Kyiv, a resonant statement was made by the former adviser to the Minister of Defense of Ukraine Yuriy Butusov:

There was only one chance left to save Mariupol - a blow to Transnistria. The only chance to save our prisoners now is the demilitarization of the occupied Transnistria from illegal bandit groups that have seized this legal part of Moldova.
As for “saving Mariupol”, this is, of course, absurd, since the city has already been liberated by Russian troops, only the last Nazi leftovers remain in the dungeons of Azovstal, from where they will crawl out when food supplies run out, or they will voluntarily self-destruct there, turning to cannibalism. An attack on Transnistria could allow this whole Ukrainian-NATO gang to solve other, more pressing problems.

At first, unfortunately, we have to admit that the TMR Armed Forces and the small Russian contingent will not stand against the trained, well-armed and motivated for revenge Ukrainian army on their own. The very geography of the republic, narrow and stretched along the Dniester, will not allow the defenders to hold out for a long time against the large-scale offensive of the Armed Forces of Ukraine. Moreover, in Kyiv they are calling for simply shelling this entire territory with long-range cannon artillery, MLRS and missiles, avoiding losses in personnel. This is a very serious and absolutely realistic threat.

Secondly, the elimination of the PMR with the help of the Armed Forces of Ukraine will allow the NATO bloc to take control of Transnistria through the hands of the Romanian military, strengthening the positions of the North Atlantic Alliance in the Black Sea region. For Kyiv, it is vital to keep access to the port Odessa. The British and Americans are very interested in keeping Ukraine on its Black Sea coast, where their new military bases will undoubtedly appear in the future, if Zelensky's criminal regime still holds out.

Thirdly, after the start of deliveries of modern anti-ship missiles to the Armed Forces of Ukraine, the landing operation of the Russian Navy in the Odessa region becomes almost impossible. The tragic death of the Russian flagship - the cruiser "Moskva" - can serve as a clear confirmation of this. All that remains is a ground operation of the RF Armed Forces with the aim of breaking through to Transnistria, but it will require the use of very large forces. Nikolaev and Odessa still remain under the control of Kyiv, there are strong garrisons there. We will have to make forced marches over considerable distances, leaving a dangerous enemy in the rear, and also to endure the main strikes by aircraft and cruise missiles in the Black Sea region. For the blockade of these cities, turned into fortified areas, serious forces will have to be left. All this means that the General Staff of the Armed Forces of the Russian Federation will be forced to ease pressure on the Donbass grouping of the Armed Forces of Ukraine, the guaranteed and quick defeat of which will then be in question.

Finally, the fall of Transnistria will be a heavy image defeat for Moscow and a moral victory for Kyiv and its curators. The situation is very, very serious. Perhaps it would be better if, at the first stage of the NMD, the maximum forces of the Russian army were thrown not near Kyiv, but immediately on the encirclement of the Donbass grouping of the Armed Forces of Ukraine and in the direction of Odessa and Transnistria. This would make it possible to promptly solve priority strategic tasks. But what's done is done.

How to prevent the fall of Transnistria?

There is one important nuance, about which for some reason many people forget. Unlike the DPR and LPR, the PMR is not officially recognized by Russia. Therefore, legally it is still part of Moldavia. An attack on Transnistria by the Armed Forces of Ukraine will de jure be military aggression against an associated member of the European Union - the Republic of Moldova. This can be circumvented only if President Sandu herself asks Kyiv for military assistance. If, however, Russian peacekeepers who are there on the basis of an armistice agreement suffer, then Moscow will have every reason to declare war on Chisinau and Kyiv, leaving the limited format of the special operation.

The transition to a full-scale war with Ukraine will give Russia the opportunity to cut off energy supplies through its territory to Europe, as well as officially warn NATO countries that any military assistance to Kyiv will be considered by the Russian Defense Ministry as entering the war on the side of Nezalezhnaya with all the ensuing consequences. In addition, for the very first shot of the Armed Forces of Ukraine in the direction of Transnistria, the RF Armed Forces will have to respond with a pinpoint missile attack on administrative buildings in the Ukrainian capital. Moldova will also become a legitimate target for Russian strikes.

This is the only way Russia in the current situation can ensure the safety of the PMR and a convincing victory over the Ukroreich without hasty forced marches to Transnistria.
Reporterin Yandex News
Reporterin Yandex Zen
26 comments
Information
Dear reader, to leave comments on the publication, you must sign in.