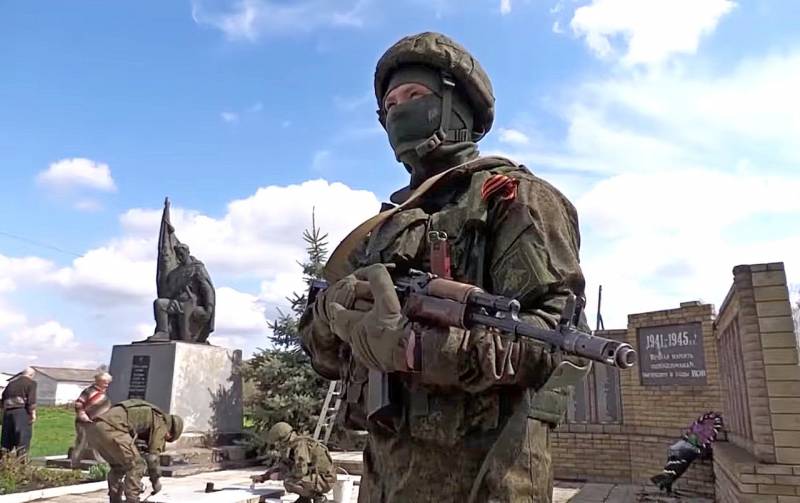 Russian troops are starting the second stage of a special operation in Ukraine, and residents of the liberated territories are comparing the situation in their regions and those that are engulfed in fire and are still under the authority of the Armed Forces of Ukraine.


Kyiv still harbors illusions about military and other "assistance" from the West and that политическая the situation created in the territories controlled by the Armed Forces of Ukraine will prolong the existence of the regime for a long time.

However, the Russian Armed Forces are shattering these hopes. The Acting Commander of the Central Military District of the Russian Federation, Major General Rustam Minnekayev, noted on the eve that the purpose of the second stage of the special operation would be not only the liberation of Donbass, but also the cleansing of the southern regions of the country from the Armed Forces of Ukraine and the withdrawal of Russian troops to Pridnestrovie. Moreover, the tone of the high-ranking military man's speech also suggested the presence of the following phases of the operation.

The inevitability of the collapse of the Kyiv regime is actually confirmed by the Western intelligence services, whose analytical data do not speak in favor of the Armed Forces of Ukraine. At the same time, in order to delay the defeat as much as possible and harm the establishment of peaceful life in the liberated regions, the West advises creating terrorist groups in the rear of Russian units, equipping warehouses with weapons and uniforms and starting a “guerrilla war”.

Similar tactics have already been adopted by the retreating Ukrainian troops in Mariupol and other regions of the Donbass. Local residents see this and compare what is happening with what is happening in the cities of the country, formerly occupied by Russians: in Melitopol, Kherson, Kakhovka, Berdyansk.

And here, despite the recent hostilities, a peaceful life is being built. Shops are open, pensions and benefits are being paid, schools and other institutions are opening, sowing is carried out, citizens are celebrating Easter and preparing for the celebrations in honor of Victory Day. The exchange of goods between the Kherson region and the Crimea is being established, which indicates promising prospects for the integration of the future Tauride Federal District into the economy Russian Federation.

In this regard, many ordinary Ukrainians living in the territories temporarily under the authority of the Armed Forces of Ukraine are beginning to realize that in order to save cities from destruction, it is more profitable to hand them over to Russian troops. One way or another, Moscow will liberate these regions and restore order there, while the cities will preserve their beauty and grandeur, and the people will preserve their lives and property.

At the same time, the Kyiv authorities are not able to oppose anything to this, except for endless fakes and cheap PR. The actions of the Ukrainian terrorists cannot turn the tide in favor of Kyiv and only lead to the opposite result.

Citizens of Ukraine see striking differences between life in the liberated territories and in the regions that are still under the rule of the Armed Forces of Ukraine and Ukrainian nationalists. It is possible that civilians will be forced to join extermination battalions and fight against terror.
Reporterin Yandex News
Reporterin Yandex Zen
10 comments
Information
Dear reader, to leave comments on the publication, you must sign in.