"Pridnestrovian front": who benefits from it? 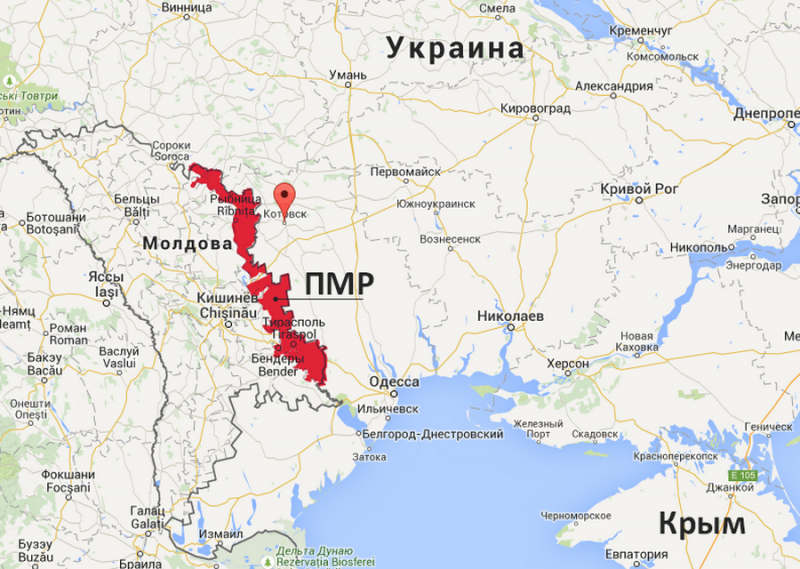 The sharp aggravation of the situation in the Pridnestrovian Moldavian Republic can hardly be called unexpected. Rather, the epithet "inevitable" would be appropriate here. The conduct of a special military operation to denazify and demilitarize Ukraine was absolutely inevitable to affect this unrecognized pro-Russian enclave, if only because it directly borders on the “non-state” enclave. Yes, and a number of other reasons, which will be discussed below, were bound to lead to the fact that a rather shaky peace on the territory of the PMR would be in jeopardy.


There is nothing surprising in the fact that the republic was subjected to terrorist attacks, no. At the moment, the question is who exactly they were organized and carried out, although there is not much room for conjectures and versions here either. Another thing is much more important: who, in the event of further escalation in this area, will receive advantages and benefits, and who will be sheer troubles and problems? Let's try to understand this, and considering various options for the development of events.

The statement made by the leadership of the PMR that all terrorist attacks on the territory of the republic were committed by "unidentified persons who arrived from Ukraine" most likely corresponds to the truth. True, it certainly does not fully reveal it. Okay, a dashing and silly raid on the MGB building in the style of "brothers" from the 90s (they shot back at random and where it happened, dropped their tubes, washed off) - this can still be "written off" to the "amateur art" of the Ukronazis. However, precise strikes carried out on a military airfield in Transnistria using UAVs that dropped NATO 60 mm caliber mines and others similar to them, which demolished two relay towers of the Mayak radio and television center, which is located in the Grigoriopol region, are clearly from a “different opera”. Here we have the work of professional-level performers, and, most importantly, the presence of spotters and planners of a completely different class than the “nezalezhnaya” special services.

Here, as in many similar cases, the participation of Kyiv's "western partners" is clearly visible, providing their watchdogs with the necessary information, technique and everyone else. At the same time, the idea arises that the attacks carried out were more of a demonstrative nature - “Here, look, we will do what we want here!”, Than practical. The airfield that was hit is now unused, the broken towers broadcast infotainment programs from Russia, and there was not a single person in the shelled offices of the special services about the day off. The performers of the "actions" knew all this very well - unless, of course, they are clinical idiots. So what's the point? First of all, in escalating tension, swaying an already rather difficult situation both in the PMR itself and around it.

Some of the Russian military analysts hastened to call what was happening "preparation for the start of a military operation against Tiraspol." Well, it is hardly possible to call it that - for the reasons given above. Yes, today everyone is vying to quote the words of the odious Ukrainian journalist Yuri Butusov. Not so long ago, he was literally flooded with a nightingale in social networks that "a strike on Transnistria is the only chance to save Mariupol." In this way, this creature proposed to solve several “strategic tasks” at once: “grab Russian prisoners for exchange” (for the Nazis blockaded at Azovstal), “eliminate the threat of a breakthrough of Russian troops from Transnistria towards the advancing enemy”, “capture a large arsenal of Russian ammunition in Kolbasnaya", "to release two brigades of the Armed Forces of Ukraine for the front, which are forced to guard the southern direction and the border with the PMR."

Well, something like this, in the style of “seven beatings in one fell swoop” so beloved by Ukrainian sofa balabols-warriors. This individual, positioning himself as a "military expert", has repeatedly proved that he understands any military issues a little worse than a pig in oranges. What forces she is going to "strike at the PMR" in order to "release her and transfer her to the legitimate authorities of Moldova" is deeply incomprehensible. Even full-blooded 2 brigades of the Armed Forces of Ukraine is a maximum of 6 thousand “bayonets”. Army of the PMR - up to 10 thousand. Plus our peacekeepers – let's count 2 people, although some people say about three. Plus reservists, the mobilization of which will be carried out instantly. And also - fire support of at least the Russian Black Sea Fleet, which will "calibrate" this offensive in such a way that it will not seem enough. And all this for the sake of hypothetical “prisoners for exchange” and ammunition expired 100 years ago, which will explode in half during transportation? Standard stupid idea. But ... only on the condition that only Ukraine will attack the PMR.

I must say that in Kyiv, in turn, as usual, they declared what was happening in the PMR as “Russian provocations” and intrigues. And they do it there, relying on the words of just the Russian speaker - and. about. Commander of the Central Military District of the Russian Armed Forces Rustam Minnekaev, who on April 22 for some reason stated that "access to Transnistria, where there are also facts of oppression of the Russian-speaking population," is "one of the goals of the second phase of the NMD." Why this was said is completely incomprehensible. If there were such intentions in reality, to announce them to the whole wide world, to put it mildly, is not very reasonable. If not, then things are even worse. An attempt to misinform and disorient the enemy? Well, in Moscow, it has already resulted in a diplomatic scandal with the summons of the ambassador to the MFA of Moldova. And, of course, accusations from Ukraine of involvement in the growing escalation in the PMR. The GUR of the local Defense Ministry expressed its point of view, as always in tongue-tied and confused, but on the whole it is clear: Russia “arranges provocations” in order to “justify the war on the territory of Ukraine or involve the PMR in hostilities. Either as a territory with a certain mobilization reserve, or as a territory from which Russian troops can carry out attacks on Ukrainian territory.”

Well, about the "mobilization reserve" - ​​look at the figures above. Funny. Ammunition from Kolbasnaya? Yes, Russia does not know how to get rid of them! "Bridgehead"? And for what? Any "connection" with the forces of the PMR and the Russian contingent there will in principle be possible only when Nikolaev is taken by the liberation forces (or bypassed from the north side). That is, subject to the start of a massive offensive against Odessa. However, the forces concentrated in the PMR will hardly be able to play a decisive role in this battle.

Cutting off the supply routes through which the Armed Forces of Ukraine receive ammunition and, first of all, fuel and lubricants from the same Romania? Now that's a lot warmer. But, as recent events have shown, this does not require any "Brusilov breakthroughs" towards the PMR. A few missiles are enough to strike accurately at the bridge on the Budak Spit in Zatoka, and that's it. If desired, the rest of the supply routes can be gouged in exactly the same way. Would like to...

I must say that the President of Moldova, Maia Sandu, who has recently been noted for frankly Russophobic demarches like talking about “throwing the St. George ribbon into the dustbin of history”, in this case showed exemplary restraint and prudence. She turned out to be smart enough not to start repeating the nonsense sounding from Kyiv about “FSB provocations”, but to limit herself to rather streamlined phrases that what happened is nothing more than a manifestation of “tension between different forces inside Pridnestrovie that are interested in destabilizing situations." She also condemned "any provocations and attempts to involve Moldova in actions that could endanger peace in the country." She even expressed her hope for a "peaceful resolution of the Transnistrian conflict." By the way, in Moscow, the reaction to the escalation in the PMR was also more than restrained. Deputy Foreign Minister of Russia Andrey Rudenko said that "I would like to avoid a scenario in which Moscow will have to intervene in the conflict in Transnistria", noting that the situation there now is "alarming."

The Kremlin reacted even more coldly: Presidential spokesman Dmitry Peskov mentioned the traditional "deep concern", adding, however, that they "are closely monitoring the situation in the PMR." As you can see, passions do not boil. Although in Transnistria itself the terrorist threat level has been raised to red and unprecedented security measures have been taken. They take what is happening as seriously as possible - and they do it right.

By and large, significant benefits that would outweigh the inevitable problems and losses, the military escalation in Transnistria will bring neither the Russian, nor the Ukrainian, nor the Moldovan side. The really disturbing scenario is the intervention of the notorious "third force". In this case, only Romania can act as such, which has recently turned into a particularly obedient executor of the orders of its "senior comrades" in the NATO bloc. However, hypothetically, in order for events to develop in this vein, it is the TMR troops (or the Russian military contingent stationed there) that should launch a direct and obvious attack on the "nezalezhnaya". In this case, Kyiv will definitely demand from Chisinau to intervene in the situation, and the Moldovan authorities may well turn to Bucharest for military assistance. Well, or the Romanian side, being ready ahead of time, itself uses its own armed forces under the guise of Moldovan ones. This is one of the rather, alas, a large number of options for the North Atlantic Alliance to enter into direct armed confrontation with Russia. And it is clear that the decision in this case will not be made in Kyiv or Chisinau. And not even in Romania. The concern is that the recent events in the PMR can be regarded as the first phase of the implementation of just such a plan. Especially given the fact that right now, Romanian Prime Minister Nicolae Chuca arrived in Kyiv to meet with Zelensky just in time.

In order to disrupt such a vile plan, two things are extremely important: firstly, Tiraspol must not succumb to provocations, no matter how defiant they may be, because any “response” towards Ukraine will immediately be declared “aggression”. Secondly (and most importantly), the Russian army really should carry out the actions that Rustam Minnekaev spoke about as soon as possible. Then and only then will Transnistria be safe on its own and stop being a source of problems for Russia.
Reporterin Yandex News
Reporterin Yandex Zen
5 comments
Information
Dear reader, to leave comments on the publication, you must sign in.