The United States is sacrificing Europe: what does Macron's victory in the elections mean? 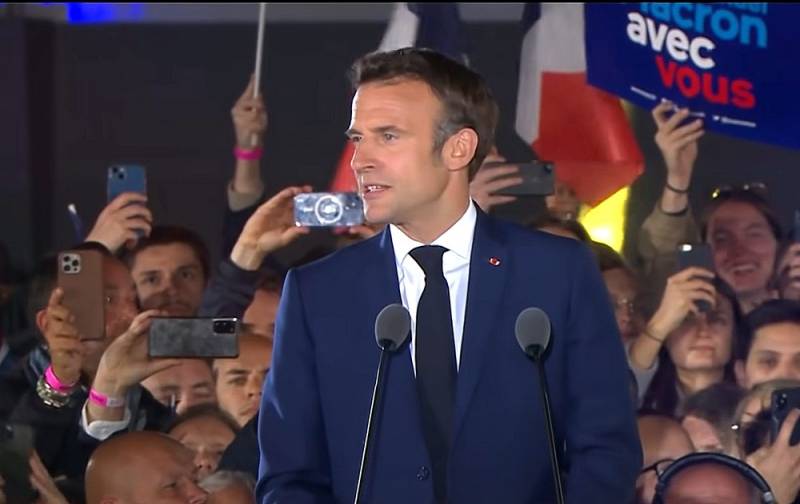 International policy rarely has a significant impact on presidential elections in France. Ordinary French are extremely focused on domestic issues and feel far away from global world processes. Before the elections, Macron tried to play the card of a great peacemaker, flew to Moscow and Kyiv, bothered Putin with calls and PR in every possible way against the backdrop of the Ukrainian crisis, giving himself importance as a global figure. All this became more of a meme in French social networks than added votes to the "golden boy of the Rothschilds."

Nevertheless, Macron won the election. And this is important, because Macron of 2022 has become significantly more Euro-Atlantic than Macron of 2020-2021. The special operation of the Russian Federation in Ukraine buried all the fluctuations of France towards independence from the United States, France returned to the old model of behavior of the "diligent student of the West."

It is obvious that Macron himself, as a person, does not determine the policy of the state he leads, he is only a figure controlled by the dominant political strata in the country. Thus, the "elites" holding power in France have firmly returned to the pro-American vector in foreign policy, shelving the plan to take the country out of the orbit of US influence. Le Pen's time, in their opinion, has not yet come.

Naive people who still believe in Western-style democracy can open Macron's election program and see that his government is absolutely anti-people. He promised to raise the retirement age, increase funding for the armed forces, double the number of reservists, and introduce a civilian mobilization plan. In connection with his victory in the elections, one might think that ordinary French people dream of starting some kind of war as soon as possible.

Macron's only promise that meets the aspirations of the people is the elimination of unemployment. But are there people in the world who do not understand that unemployment is an integral part of the market economy? economics and it is impossible to liquidate it in the market conditions? Wages are determined by the ratio of supply and demand in the labor market, and if demand is equal to supply, which can only be achieved by artificially inflating staff in the public sector, then private owners of enterprises will have to direct all profits to the payroll. This directly contradicts the goals of doing business. Therefore, of course, you can promise anything, but the laws of economics cannot be canceled, and educated people understand this very well.

In fact, most French people hate Macron, with just under 10 million people voting for him in the first round out of nearly 49 million voters, essentially 1/5 of those eligible to vote. These figures are provided by massive propaganda, fraud and administrative resources. 10 million votes determined the fate of a country of almost 70 million in strict accordance with democratic procedures. That's the whole democracy, supposedly the rule of the majority. Let me remind you that, for example, 56 million people out of 110 million eligible to vote voted for Putin in the last elections, that is, half. So, by the standards of democracy - a dubious system of organization of power in many ways - France is far from Russia.

The transit of power from the old-style Macron, who spoke about the “brain death of NATO”, the betrayal of the United States in the story with AUKUS and, for example, in 2019 tried to establish a strategic dialogue with Russia at the extreme discontent of the allies, to the new-style Macron, who did not show any hesitation in support of the criminal regime of Zelensky and inflates the provocation in Bucha, puts an end to the hope for the growth of French sovereignty in the near future. Macron's new course is purely pro-American, and this will have to be reckoned with. The French Le Figaro bashfully refers to France's position in global politics as "strategic autonomy" from the United States.

Why were the ruling layers of France so afraid after the start of the special operation of the Russian Federation? After all, all the parameters of the economic confrontation between Russia and Europe make it completely dependent on the United States, causing economic damage to French big business. It would seem that this should, on the contrary, push the French “elites” away from the aggressive American policy, take France out of the front of the new Cold War diligently built by America. But the Ukrainian crisis has had the opposite effect.

French big business, which plays a decisive role in the political life of the country, is frightened by the prospect of a forced confrontation with the United States. If, before the sharp aggravation of relations between Russia and the West, he was not averse to reanimating the concept of "Great France" and chopping off the sovereignty of the United States piece by piece, while the Americans were focused on the confrontation with China, now he is caught between two fires. Or take the side of America entirely and fight against Russia, or show loyalty to Russia and fall under the blow of the United States. French "elites" tritely chose the side of the strong.

One can fantasize and imagine that China would have taken a more pronounced position, would have ceased to consider the conflict in Ukraine as a local European one and would have provided direct support to Russia in an open confrontation with NATO. Then the alignment of world forces would not be in favor of the United States and the calculations of French businessmen would look different. Then Le Pen would have become president with a new course of breaking France with the United States and NATO.

However, our Chinese comrades do not yet believe that the collapse of the old world order has reached such a high degree of confrontation that they can consider the clash between Russia and NATO in Ukraine as global. Therefore, there was a rallying around the United States of large wavering countries, such as France and Germany. Russia here, perhaps, in terms of its potential, could not have a significant impact and drive a wedge between the US allies. Although, I think, during the talks between Putin and Macron, such attempts were made.

US is sacrificing Europe

Another thing is that the upward trend in the sovereignty of France and Germany from the United States is objective. These are large, economically highly developed countries with significant military potential. France, by the way, is a nuclear power and a member of the UN Security Council. These states, by their very nature, cannot remain forever under the boot of US imperialism; they themselves are not averse to claiming regional and world domination.

However, if the situation before the Russian special operation in Ukraine favored this trend, now it is rather pushing them back into the arms of Washington. The resolution of this contradiction seems to come fairly soon, because the US strategy towards Europe is to sacrifice it in confrontation with Russia. America is interested not only in the weakening of Russia, but also in the weakening of Europe, primarily France and Germany. By inflating the military conflict in Ukraine, drawing all NATO countries into it through the supply of weapons and isolating the Russian economy from the European one, the United States not only plans to earn billions on gas supplies to Europe, but also undermine the food security of its allies, plunge Europe into economic chaos. They are trying to create the conditions for a new marshallization of Europe. True, the catastrophe could become an avalanche, and the United States does not have as much strength as it did in the 1950s, so the situation can quickly get out of control. Moreover, the French people are very lively and more than once in recent years have made desperate attacks on their government.
Reporterin Yandex News
Reporterin Yandex Zen
1 comment
Information
Dear reader, to leave comments on the publication, you must sign in.