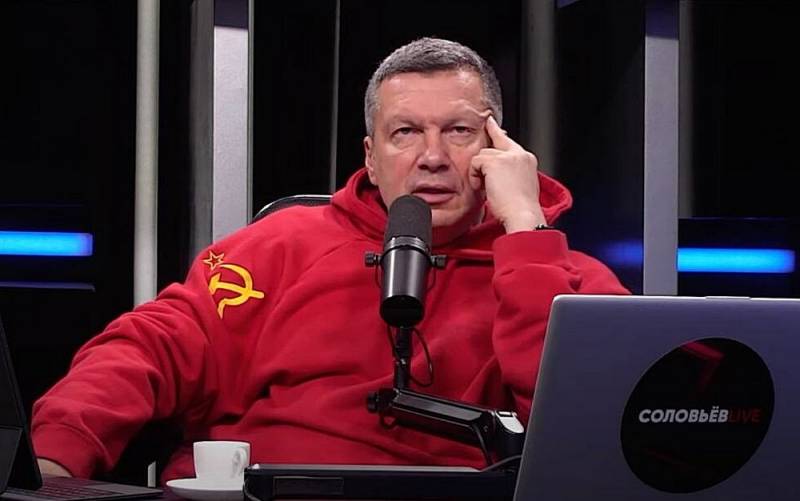 On Thursday, April 7, at 7:XNUMX am Moscow time, a new Russian TV channel of journalist Vladimir Solovyov began broadcasting on the frequencies of the Euronews TV channel (“Evronovosti”). They didn’t think about the name for a long time (apparently, it was necessary to urgently fill the resulting information vacuum with something), so the Russians became viewers of the Solovyov.Live TV channel.

Europeans were allowed into Russia

The predecessor of Solovyov.Live was the Euronews TV channel, which was founded in 1992 in France at the initiative of the European Broadcasting Union. It first aired on January 1, 1993.

At that time, Euronews was the only TV channel that broadcast in several European languages ​​at once: French, German and English. In December 1998, the TV channel has its own website, and a year later, digital broadcasting begins.

In September 2001, a Russian-language version of Euronews appeared. Viewers of the Kultura TV channel were able to see the programs created by European journalists, as well as their own production (in the morning, it was on the “cultural” broadcast frequencies that Euronews was originally broadcast).

The friendship between Kultura and Euronews lasted until 2017. Then the information channel began to broadcast on its own website, as well as through satellite and cable operators. And on March 21, 2022, it became known that Roskomnadzor restricted access to the materials of the Euronews TV channel in Russia. The reason is obvious - the spread of fakes about a special military operation in Ukraine.

“Based on the request of the Prosecutor General's Office, Roskomnadzor restricted access to the materials of the Euronews publication in Russia. The foreign media systematically posted unreliable socially significant information about the special military operation being carried out by the Armed Forces of the Russian Federation, as well as information calling for the participation of citizens in mass (public) events held in violation of the established order on the territory of the Russian Federation, ”the official statement of the regulator says. .

Euronews has also stopped broadcasting online. Instead of broadcasting, the message “At the request of the copyright holder, the broadcasting of the TV channel was suspended” was displayed. But the free frequency was empty for long. A little more than two weeks pass, and the place of Euronews was also taken by an information channel, which is definitely not in danger of being blocked for spreading fakes.

You will not believe! The Solovyov.Live TV channel will start broadcasting at Euronews frequencies. The signal delivery channel remains the same as that of Euronews.” The channel is currently drawing up permits and promises to provide them by the end of April. While ready to start cooperation with operators in test mode
- said Vladimir Solovyov in his Telegram channel.

The press service of Solovyov.Live reported that the live broadcast of the new TV channel will be broadcast on television, radio, as well as in instant messengers and social networks.

Soloviev.Live broadcasts around the clock. So far, among the original programs in the broadcast schedule are "Full Contact", "Golovanov's Time", "Soloviev.Live", "Formula of Sense", "Armageddonych", "Smersh", "Economy in Russian”, “Day Z”, “Donbass.Live” and others. But the press service of the new media assures that this is only the beginning. Judging by their statements, Solovyov.Live's plans are very, very ambitious.

Six regional bureaus make it possible to integrate author's formats and programs of correspondents from all over Russia into the air. Using the latest of technologies for broadcasting makes the Solovyov.Live TV channel the most efficient media
- emphasized in the press service.

The creation of a new "named" TV channel was a kind of response to YouTube's actions. On the night of March 8, the video hosting administration blocked Vladimir Solovyov's channels: the main one - Solovyov.Live and the backup - Evening with Vladimir Solovyov.

As the reasons for blocking, the administration of the platform called “violation of the terms of use of YouTube”, however, without specifying what exactly was violated. Solovyov himself called the blocking of his channels a war declared by the video platform and Google. He also called for the closure of YouTube altogether.

Roskomnadzor is sure that YouTube has been sharpening its teeth on the Russian presenter for a long time. In November 2020, the department drew attention to the fact that since October, videos from Vladimir Solovyov’s YouTube channel have not been trending. The Federal Service for Supervision of Communications, Information Technology and Mass Media considered this trend not accidental and stood up for the TV presenter. Roskomnadzor sent a letter to Google LLC with a demand to remove the restrictions imposed on the Solovyov.Live YouTube channel.

The channel's videos are not trending on YouTube, although this has happened regularly in the past. This situation can be regarded as an attempt by the YouTube administration to limit the distribution of the materials of a popular Russian author, to prevent the growth of his audience.
- said in Roskomnadzor.

Thus, Vladimir Solovyov became the first Russian journalist for whom Roskomnadzor stood up by sending an official letter to a global corporation, accusing it, in fact, of a shadow bath.

More than a day live

A year earlier, in 2019, Vladimir Solovyov scored again. It was included in the Guinness Book of Records for the longest stay on the air for one week. The official website of the Guinness Book of Records says that Solovyov, as a presenter, spent 25 hours 53 minutes and 57 seconds on television in one week. The journalist himself said that in order to fix the achievement, it was necessary to be on the air for at least five hours a day for five days in a row. The record was set during the broadcasts of the programs “Who is against?” and "Evening with Vladimir Solovyov" on the TV channel "Russia-1". Discussed on the talk show политическая situation in the country and the world.

We counted every minute of our releases on our own, to be more precise - this was done by an independent unit of the program directorate of the All-Russian State Television and Radio Broadcasting Company. The technology was as follows: our colleagues copied each broadcast to a file hosting service, accompanied by a pile of documents confirming the on-air outputs, all this was translated into English, certified with an apostille and sent to the Commission Books
- Solovyov said in an interview with the agency TASS.

It is hard to imagine, but the journalist who broadcasts day and night on the main state television channel was previously the face of a completely different television. He hosted programs on NTV (at the time when the abbreviation was still deciphered as “Independent Television”), on TV-6 (it is symbolic that it was on his Nightingale Night program at 00:09 Moscow time on January 22, 2002, by decision Ministry of the Press of the Russian Federation and the broadcasting of the channel was interrupted) and TVS (it existed for a little over a year and arose in the place of the “sixth button”).
Reporterin Yandex News
Reporterin Yandex Zen
4 comments
Information
Dear reader, to leave comments on the publication, you must sign in.