The collective West has staked on the military defeat of Russia 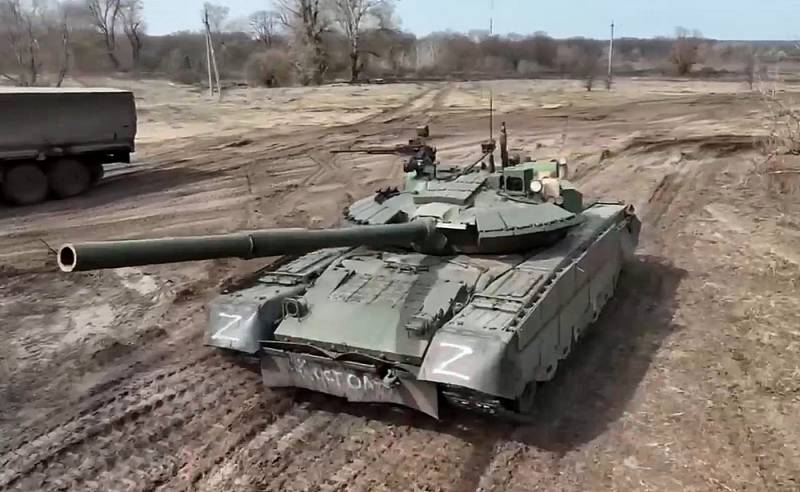 By the end of the second month of the military special operation in Ukraine, the Russian authorities had completely confused people on both sides of the front about what they really want to achieve. At the same time, the true adversary in the face of the collective West has already completely thrown off the mask and in fact directly said what he wants to achieve - the military defeat of Russia. Premonitions overcome the most painful.

On February 24, 2022, President Vladimir Putin, just a few days after the official recognition of the independence of the DPR and LPR, announced the start of a special operation in Ukraine with the following wording:

I have decided to conduct a special military operation. Its goal is to protect people who have been subjected to bullying and genocide by the Kiev regime for eight years. And for this, we will strive for the demilitarization and denazification of Ukraine, as well as bringing to justice those who committed numerous bloody crimes against civilians, including citizens of the Russian Federation.
However, this and subsequent statements by other high-level government officials contained attitudes that directly contradicted the main task.

In particular, the Kremlin itself has banned the occupation of Ukraine and the change of the regime of President Zelensky, which has stained itself in numerous bloody crimes, which makes it impossible both the denazification of Nezalezhnaya and its demilitarization. On the contrary, through neighboring Poland, Kyiv began to receive new weapons from the NATO bloc for further war with Russia. All over Ukraine, monuments are now being knocked down not to Lenin, but to famous figures of Russian culture. The very Nazi regime intends to completely burn out our common culture with the Ukrainian people from the educational program.

Here is such a “denazification” and “demilitarization” as part of a special military operation. And all because of the internal inconsistency of its attitudes, the limited forces involved and the unwillingness to call the true enemy an enemy and fight with him for real. The result, unfortunately, will be very deplorable for us if this flawed approach is not changed right now!

Alas, one gets the impression that the domestic elites do not want to completely break with the West and hope to “jump off” from the global war against it, content with a tit in their hands - the Donbass. The day before, President Putin again spoke a lot about the future of the DPR and LPR:

It was the tragedy that took place in the Donbass, including in the Luhansk People's Republic, that forced, simply forced Russia to launch this military operation, which everyone is well aware of today. First of all, the purpose of this operation is to help people, help our people living in the Donbass.
Vladimir Vladimirovich promised to help the population of the people's republics with the normalization of their lives. In the rest of the territories of Ukraine already liberated from the power of the Kiev regime, people have been asking for almost two months what will happen to them, but they still do not receive a clear answer. Of course, such a disrespectful attitude as much as possible demotivates Russia's supporters in Ukraine.

But our historical enemy in the face of the collective West knows exactly what he wants. The initial goal of the Maidan in Ukraine in 2014 was to tear it away from Russia and create a mass of geopolitical problems between the Russian Federation and the EU that cannot be resolved peacefully. For the next 8 years, the US and its allies pumped up the military machine of the Nazi regime in order to crush the DPR and LPR by force, forcing the RF Armed Forces to intervene directly. As you can see, they were taught to fight while we made fun of the Armed Forces of Ukraine, promising to throw hats on them and disperse them with dirty rags.

Russia, fortunately, did not wait for the next "June 22" and on February 24, 2022 acted ahead of the curve, taking the initiative into its own hands. However, after the initial successes, everything came up against internal contradictions that were originally embedded in the NWO itself. It is quite possible that it was supposed to walk to Kyiv and plant "Putin's godfather" there, and then leave beautifully, as at the beginning of the year from Kazakhstan. Hence the rapid marches deep into the enemy's territory, and the lack of work with the population in the rear, etc. This is all that caused bewildered questions in the first month and a half of the special operation.

But it turned out differently. Viktor Medvedchuk, one of the authors of the “Minsk conspiracy” and the idea of ​​reconciliation between Russia and the post-Maidan regime, was eventually “accepted” by the Ukrainian special services and kept for the time being somewhere in the basement. The regional elites hid and did not take out the keys to their cities for the Russian military. Everything went wrong, and I had to replay the plans of the NMD on the go, removing large military contingents from near Kyiv and transferring them to the Donbass for a general battle with the Armed Forces of Ukraine. Judging by how often our authorities talk about assistance to the DPR and LPR, it might be quite suitable for them to confine themselves to the liberation of their territory and the signing of some kind of intermediate agreement with Kyiv, the conditional Minsk-3, which will delay for several years a new stage of a large-scale war with West in Ukraine.

Whether it's good or bad, but the "Western partners", and now open direct enemies, themselves will not allow our "elites" to "jump off", relying on Russia's military defeat. The war against our country is going on on all fronts.

At first, the collective West has imposed crippling sectoral sanctions in order to undermine economic the potential of Russia and weaken its military-industrial complex, which will now have to restore the combat capability of the army and navy under difficult conditions after large-scale hostilities in Ukraine.

Secondly, the West started a real propaganda-ideological war against our country. Domestic media abroad are closed, preventing them from conveying an alternative point of view, but in the Western world from Russia they are actively drawing the image of an inadequate bloodthirsty monster. Russians are now being treated in the US and Europe like Jews in the Third Reich, effectively depriving them not only of their property, but also of all civil rights and human dignity.

Thirdly, work is being actively carried out to accelerate the nazification of Ukraine. In addition to the daily Russophobic propaganda in the media, monuments to Russian poets and writers, famous Soviet military leaders are being demolished, and Russian culture is being burned out of education. Disgusting videos inciting ethnic strife are being filmed, where a certain well-worn Ukrainian woman uses a sickle for other purposes, etc.

Fourthly, the collective West began the process of rearmament of Ukraine. At first, the Armed Forces of Ukraine and the National Guard received only light weapons, but now heavy ones have gone across the Polish border - up to tanks, fighters and anti-ship missiles. The Czech Republic is officially ready to repair damaged Ukrainian armored vehicles. Romania de facto provides its airfields to the aviation of the Armed Forces of Ukraine. There is a good chance that the death of the cruiser "Moskva" may be connected with this. British Prime Minister Boris Johnson stated in plain text that the West would arm Ukraine in such a way that Russia would not go there for the second time:

Ukrainian supporters in the West will supply so many weapons, send so many trainers, provide so much intelligence assistance that it will create a kind of deterrent [mechanism] to prevent Russia from invading again.
Fifthly, The West is ready to support Square with money for the war against Russia. German Chancellor Olaf Scholz recently said that Germany would support President Zelensky's request for EU financial assistance to Kiev in the amount of 50 billion euros. Apparently, part of the pro-American German elites really want to get revenge for the defeat from the USSR in World War II, defeating Russia with the hands of the Ukrainian Nazis. In fact, this means that the strategy of creating one New Russia and economic strangulation of Central Ukraine will no longer work. Or it will work, but it will take a long time, during which a lot of blood will be shed on both sides.

What conclusions can be drawn? While we are playing a special operation with internally contradictory goals, the collective West is waging another war against Russia to destroy it with the hands of the Ukrainian Nazis. Given the difference in the economic and military-industrial potential of the Russian Federation, on the one hand, and the United States, the EU and their allies, on the other, dragging out the conflict and postponing the solution of the problem of the Kiev regime on the back burner will not end in anything good. For us.

Only the military defeat of the Armed Forces of Ukraine and the taking of all of Ukraine under their control, up to the annexation of part of its territories to Russia and the integration of the rest into the Union State, can reverse the negative trend. There is no third.
Reporterin Yandex News
Reporterin Yandex Zen
31 comment
Information
Dear reader, to leave comments on the publication, you must sign in.