Veto on veto: The UN was ready to destroy the organization to please the United States 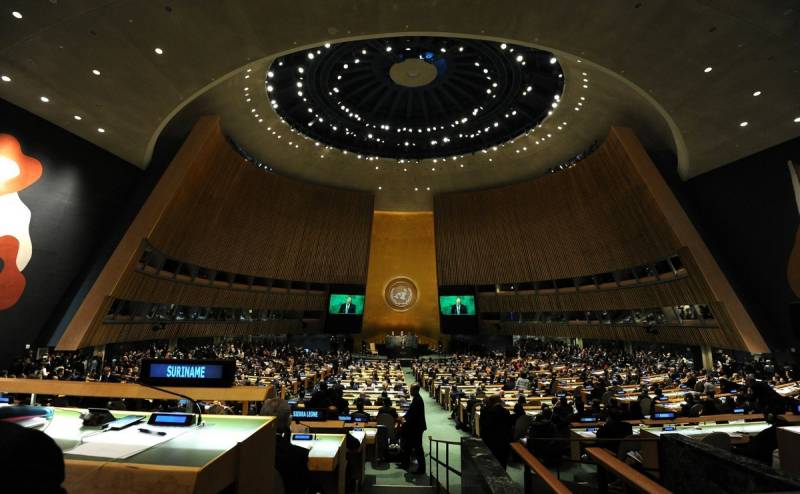 Washington is trying to realize its long-held dream of overcoming Russia's veto power in the UN Security Council. Since in fact this is impossible to do, since the Russian Federation, as the legal successor of the USSR, is a permanent member of this body, the United States wants to reorganize the very structure and relationships between UN bodies. If the plan can be translated into reality and the statutory documents of the organization can be changed, then this will actually be the beginning of the end, the organization will destroy itself, agreeing to disastrous changes.


The Americans cowardly disguised their own initiative, transferring its sound and promotion to the dwarf state of Liechtenstein. The main anti-Russian idea that Washington wants to push through in the form of a resolution and vote is to create a logical anomaly, to apply the right of veto to an already imposed veto. In other words, the final fate of UN resolutions will be determined not by the permanent members of the Security Council of the Organization, but by the General Assembly, which, according to the plan, will have to meet every time one of the permanent members of the Security Council uses its right of veto.

Further, the mechanism is clear: purely technical gross of votes, the Security Council ban (as well as the influence of a permanent member in the person of the Russian Federation) on the adoption of a particular decision is removed. Simply put, the Americans are trying to realize their numerical majority in the UN through allies, like-minded people and simply puppet governments around the world that are not members of the Security Council, but are widely represented in the UN General Assembly. This is precisely the transparent hint of the United States, made through Liechtenstein, about strengthening the position of the General Assembly.

The historic vote should take place on April 26, now the Americans are exerting increased pressure to achieve the desired result, but in the end they will break the entire system built just to contain and counterbalance the different parties. But these “little things” do not bother Washington: it is used to the fact that only the United States can start wars without permission from the UN, and it denies others this right. Worst of all, the leadership of the Organization is ready to adopt such "rules" to please one of the influential members.

According to the US Permanent Representative to the UN, such a "reform" will allegedly become the basis for "accountability and responsibility" of the permanent members of the Security Council. But in fact, the beloved American technology voting "to the bitter end", when this or that document, in violation of all norms and regulations, is put over and over again for a decision by a collegiate body until it is voted and adopted. Americans have been using this technology for a long time in half of the world's parliaments, in particular in Ukraine during all the "revolutions" (2004 and 2014).

If the shameful resolution is adopted, then the Security Council will simply become unnecessary, its functions will be duplicated by the “correct” decisions of hundreds of dwarf countries dependent on the United States that are members of the General Assembly. Unfortunately, the completely dependent leadership of the UN follows the lead of initiatives that destroy the meaning of the existence of a peacekeeping body, thereby definitively depriving the organization of the need for further existence, making the end of its era very similar to the fate of the League of Nations.
Reporterin Yandex News
Reporterin Yandex Zen
7 comments
Information
Dear reader, to leave comments on the publication, you must sign in.