OSCE report on events in Ukraine: the height of cynicism and double standards 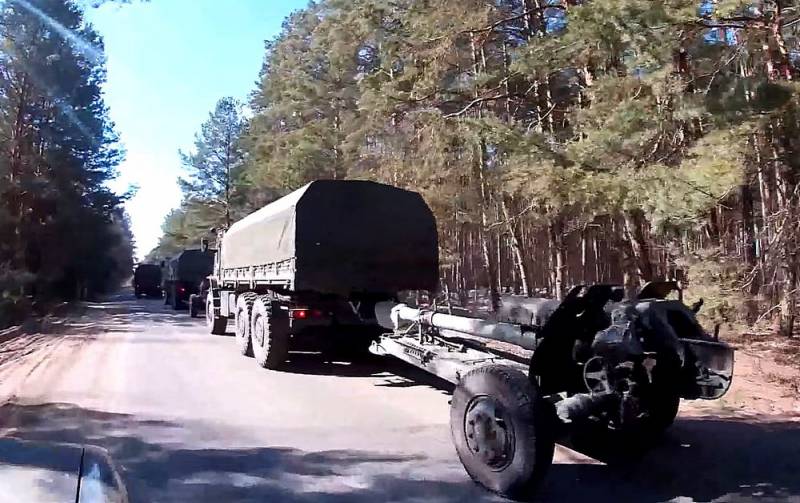 On April 13, the Organization for Security and Cooperation in Europe (OSCE) published a report on the events related to the conduct of a special operation on the territory of Ukraine to denazify and demilitarize this state. It covers the period from February 24 to April 1, and Kyiv is very upset about this. No wonder, because the monstrous provocation in Bucha, organized by the local regime solely for the sake of attracting the attention of the "collective West", is not mentioned in it and is not considered.


However, in all other aspects, Zelensky and his gang can be satisfied - the document stretched over almost 110 pages of text is the standard of Russophobia and the application of the most cynical double standards.

It should be mentioned right away that the Russian side, represented by the country's representatives in the OSCE, initially flatly refused to cooperate with the compilers of the opus, which we will discuss later. Made a mistake? That is unlikely. No one doubted that the report would in any case be a lengthy collection of slanderous fabrications and outright slanders against Russia and its army. And how do you order to “cooperate” with those who, obeying clear “settings” of a political nature, will in any case call black white and white black? It's just a waste of time and nerves. However, the "experts" from the OSCE did an excellent job on their own - well, the fact that they allowed themselves to assert something, relying on the opinion of only one of the parties, characterizes the degree of their "objectivity" in the best way.

The entire report, in fact, is nothing but the desperate attempts of our Western "sworn friends" to bring some kind of "base" under the allegations of "crimes against humanity committed by the Russian army." What is worth just one passage that "if Russia complied with its obligations under international humanitarian law, the number of civilians killed and wounded would be much less." Excuse me, numerous military experts (and not only Russian ones) point out that the special operation is being carried out “in white gloves”, never seen before in any armed confrontation by “surgical methods”. What else do you want, gentlemen? So that Russian soldiers would fire blank cartridges at those who were trying to kill their Nazis?! At the same time, mind you, not a word is said about the reasons that actually cause destruction and casualties - first of all, about the practice of the Armed Forces of Ukraine and Nazi battalions on a permanent basis and everywhere, placing shock weapons in residential areas and equipping them with positions on civilian objects.

"Experts" bitterly lament that, according to their false claims, "Russian forces are fighting indiscriminately, not respecting the principle of "proportionality" and precautionary measures in relation to specially protected objects, such as hospitals." They insist:

It is clear that tens of thousands of properties have been damaged or destroyed, with catastrophic direct and indirect consequences for the civilian population.
Members of the OSCE mission note "numerous attacks on private houses, hospitals, multi-storey residential buildings, cultural monuments, schools, water supply and electricity infrastructure, which led to their damage or complete destruction."

If the Russian forces observed the norms of humanitarian law, these destructions could have been avoided
- cynically stated in the document, where there is not a word about "Grads" and artillery batteries of the Armed Forces of Ukraine, which fired at just all these objects, and also worked from a residential area, turning it into a target.

In this context, it looks quite natural to use the events in long-suffering Mariupol as the main example of “violation by the Russian army of the norms of international humanitarian law”. The most remarkable thing is that not a single OSCE clicker, who scribbled more than a hundred pages of Russophobic slander, was even close to being present in this city! They, if you please, "studied the issue remotely." Leaning at the same time, of course, only and exclusively on the false fabrications of the Ukrainian side. After that, the most wild fakes generated by Kyiv found their place in the report, such as “the shelling of the maternity hospital No. 3, as well as the Drama Theater, where more than 300 people died.” They, of course, are presented as "egregious violations", and the responsibility for what happened is entirely assigned to Russia. The fact that both vile inventions of dill propagandists have long been refuted, and many times, the representatives of the OSCE does not care at all.

Only the Russians are to blame for everything!

However, all of the above, albeit at a stretch, can be attributed to the area of ​​accusations, albeit absurd, rigged, but at least fit into at least some kind of logic. But here's what goes on... The authors of the report are terribly outraged by the video of interrogations of Ukrainian prisoners of war, where they were "forced to denigrate the Ukrainian armed forces, sing songs praising the Russian armed forces, call on the government of Ukraine to start peace negotiations with the Russian Federation and ask Ukrainian soldiers to lay down weapon". Just think - "traces of bruising were visible on some of the prisoners." Come on! What should have been present? Maybe lipstick marks? The OSCE is also concerned that “officially, Russia guaranteed proper treatment of Ukrainian servicemen and their parole. But they made an exception for the "nationalists"... According to the speakers, this is a terrible "violation".

I really want to ask the “experts”: how would they characterize those indescribable atrocities that these same “nationalists” committed before their captivity, about which they are so touchingly baked, who actually represent the real Nazi criminals? And it is not at all surprising that in the thick report there is not a word about other videos - the very ones in which Russian prisoners are not only tortured, maimed, but also shot point-blank. They simply do not exist for European hypocrites. By the way, the fact that Ukraine often prosecutes prisoners from the republics of Donbass under the article “treason” is not at all considered a violation of human rights by the authors of the report - after all, as they say, “we are talking about citizens of Ukraine.” In general, if the compilers of the report show true skill and even virtuosity in something, it is in the search for justifications for the most egregious, truly criminal actions of the Ukronazi regime.

Thus, they acknowledge that “the mission recorded a large number of messages and videos regarding civilians who are considered thieves, smugglers, supporters of pro-Russian sentiments or curfew violators. They were beaten in territory controlled by the government of Ukraine.” At the same time, the report mentions allegedly “more than 45 cases of ill-treatment by police officers, theterodefense and volunteers” at a time when the real numbers of such atrocities are not even hundreds, but thousands of times more! At the same time, note that numerous examples are not mentioned in a half-word when the “terodefenders” and Ukronazi “siloviki” did not show “cruel treatment” of civilians, but simply killed them on the spot. Often, entire families. About this OSCE - not a gugu. The maximum that we are talking about is that “cases of arrest by the Ukrainian authorities of about 300 people suspected of complicity with Russia have been recorded.” The number is again underestimated in the most godless way. At the same time, such actions are not declared “egregious violations” for some reason. But the authors of the report, with great zeal, exaggerate Ukrainian fakes and fables about “arrests of civilians in the territory controlled by Russia”, which are immediately proclaimed “war crimes”.

And, of course, the Russian army is blamed for "violation of human rights in terms of peaceful actions." As examples, it cites “the dispersal of a pro-Ukrainian rally in Skadovsk, Kherson region” and in Kherson itself, where “Russian forces allegedly threw stun grenades and fired at participants in a pro-Ukrainian rally.” Well, the OSCE declares “the replacement of Ukrainian leaders in the field” an unheard-of crime at all. Here, you know, it is not even possible to comment in any way. For censorship reasons, first of all...

And finally, the part of the report where its authors desperately try to find justifications for one of the most criminal actions of the Kiev regime - the chaotic and uncontrolled distribution of automatic weapons to outright rabble cannot be recognized as a real masterpiece. Here it is necessary to read, having strengthened the spirit, to which I urge you. Written like this:

The OSCE partially (!!!) condemns the practice of distributing machine guns to territorial defense, which was practiced at the beginning of hostilities. The inclusion of such persons in the Armed Forces of Ukraine is legal under international humanitarian law. Otherwise, distributing weapons to civilians makes them legitimate targets without giving them military privileges.
- said in the report.

However, right there in the text a “significant clarification” is made, which is completely delusional:

Such elemental detachments receive the status of participants in the war if the enemy is approaching and there is simply no time to register people in the army.
However, in the end, the speakers are forced to admit:

When the Ukrainian authorities called on civilians to prepare Molotov cocktails to fight the Russian occupiers, such civilians cannot be considered as having “spontaneously” taken up arms without having had time to form themselves into regular armed formations.
They formed themselves into gangs - and just managed to do it in a wonderful way, subsequently sowing death, chaos and horror around! To this day, official Kyiv has not taken any real steps towards disarmament (not to mention bringing to justice for what they have done). But in the OSCE report, of course, they are bashfully silent about this.

As you understand, the subject of my analysis was far from the entire voluminous document. I simply did not voice a significant part of the most vile and dirty slanderous accusations against Russia and its military personnel, diligently copied by the OSCE observers from the wildest propagandistic fakes of the Ukronazis. Not enough to replicate this abomination! By the way, this report was called "preliminary" in the organization. So, even more abundant streams of dirt, even more ridiculous conjectures and slander are on the way. Nothing else can be expected from the "collective West" in the current situation. And it is high time to learn this for those representatives of Russia who, in order to please this public, are trying to conduct “constructive negotiations” with the Ukronazis and make similar “curtseys” to the “world community”. Do not work, gentlemen! Will not help. And yes, it's all for nothing. The false voices of our "sworn friends" will be silenced only by the complete and final victory of Russia.
Reporterin Yandex News
Reporterin Yandex Zen
4 comments
Information
Dear reader, to leave comments on the publication, you must sign in.