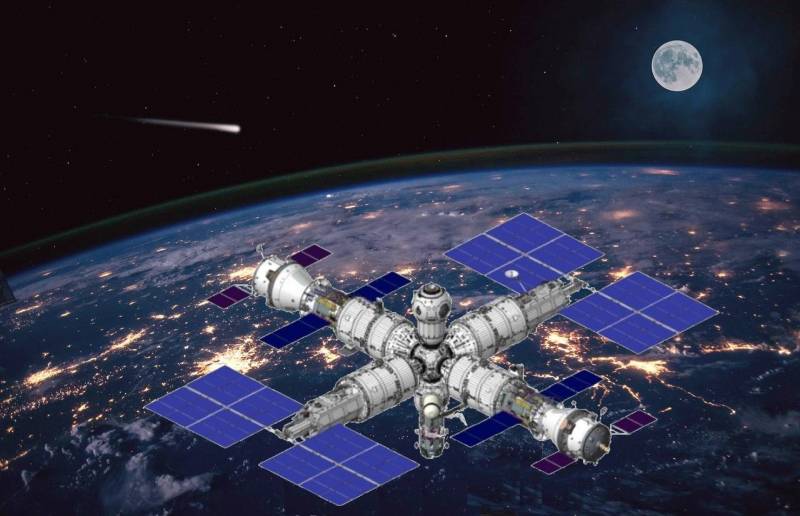 Talk that Russia needs its own orbital station has been going on in the expert community for a very long time. A year ago, at the highest level, a fundamental decision was made to create a national space station ROSS. After February 24, 2022, an independent path for our country actually became uncontested.

Space and international cooperation in its development have always tried to keep out of the big policy. Alas, not this time. For the first time since the end of the Cold War, the border of the new Iron Curtain also lay in near-Earth space.

Western sanctions against enterprises of the Russian space industry began to be introduced several years ago. They included, in particular, the Samara RCC Progress, which produces launch vehicles and other spacecraft, and the Central Research Institute of Mechanical Engineering (TsNIIMash), which implements softwaretechnical providing flights to the ISS, manned and cargo spacecraft, scientific and other devices. After the start of a special military operation to demilitarize and denazify Ukraine, the United States, Canada, Great Britain and the European Union introduced a new tough package of anti-Russian sanctions in the space industry.

Thus, the State Rocket Center named after Academician V.P. Makeev, which produces rocket and space systems, JSC Federal Research and Production Center Titan-Barricades, which is part of Roscosmos, and JSC Salavatsky Chemical Plant, were subject to restrictive measures. The European Space Agency declared it impossible to continue cooperation with Russia in the framework of the ExoMars program for the exploration of Mars. The United States and Great Britain imposed a ban on the export of aviation and space products and technologies to our country. Germany turned off the operation of its telescope as part of the Spektr-RG research project jointly with Roskosmos.

We did not remain in debt, and Roskosmos refused to launch satellites for the British company OneWeb from the Baikonur cosmodrome, as well as launch rockets from the Kourou cosmodrome in French Guiana. The sale of RD-180 and RD-181 rocket engines to the United States was suspended, and maintenance of those already delivered was frozen. As is now customary, the state corporation switched to settlements in rubles in all new contracts. Judging by the way events are developing around the conflict in Ukraine, reconciliation with the West is no longer possible, they are ready to fight against Russia "to the last Ukrainian."

A logical question arises, what will happen to the ISS project, which is historically tied to servicing by Roscosmos?

At first, "Western partners" are still dependent on Russian ships to bring their cosmonauts to the station. Until 2011, there was a so-called cross system, when foreigners got places on our ships, and Russians on American ones. After 2011, flights to the ISS were carried out only on domestic Soyuz, but in the United States they attended to the revival of their own manned cosmonautics. Starting in 2020, NASA has been in talks with Roscosmos to resume the practice of cross-flights. What will happen to this now in the conditions of the new Cold War is not at all clear.

Secondly, the very existence of the International Space Station is critically dependent on Russian technology. In particular, the correction of its orbit in order to avoid collisions with space objects is carried out with the help of our Progress spacecraft.

Thirdly, the ISS resource is close to complete exhaustion. According to the current agreements, the life of the station has been extended until 2024, and Roscosmos has specific obligations to maintain it. But now the US and its allies want to extend it until 2030. At the same time, the Americans want Russia to continue to work as a "cab driver" and an orbit corrector. The head of the state corporation, Dmitry Rogozin, set the condition that this is possible only if sanctions are lifted from the enterprises of the space industry:

I believe that the restoration of normal relations between partners in the International Space Station and other joint projects is possible only with the complete and unconditional lifting of illegal sanctions.
However, the "Western partners" evaded a direct answer, entrusting the decision to their political leadership. So what do we have? There is the ISS, in the preservation of which our "enemies" are interested. The deadline for its operation is set by experts until 2030, after which it can literally “fall apart”. About where the ISS can “splash down” or “land” after this, the head of Roscosmos Rogozin wrote in his account:

If you block cooperation with us, who will save the ISS from an uncontrolled deorbit and fall into the United States or Europe? There is also the option of dropping a 500-ton structure to India and China. Do you want to threaten them with such a prospect? The ISS does not fly over Russia, so all the risks are yours. Are you ready for them?

The events in Ukraine proved that we are not on the same path with the countries of the collective West, which means that we must go our own way, systematically curtailing cooperation on the ISS after 2024. What then can be the national orbital station ROSS?

The decision to create Russia's own orbital station was made last year. Judging by the latest statements by Dmitry Rogozin, it will not conceptually resemble either the ISS or the Mir that disappeared in the depths of the sea.

The "extrovert" station, as the head of Roskosmos called it, will consist of a docking "ball" and two modules - residential and laboratory. The rest of the structure will be a bracket for installing equipment. Subsequently, more modules can be added. ROSS will be as pragmatic as possible: the cosmonauts stay on it will not exceed 1 month - they flew in, completed the task, repaired something and flew away. The main work will be carried out on the surface of the station, and not inside.

Why this is so, there are different explanations. According to official data, ROSS will monitor the Arctic zone and serve as a platform for scientific exploration of space and even flights to the moon. According to the unofficial version, the Russian station will be of great intelligence value, which is explained by the unusual angle at which it is located in the polar regions. Because of this, there is a high level of radiation, which makes it impossible for a person to stay in near-Earth orbit for a long time, which determines the visited nature of the ROSS, but opens up an excellent view beyond the territory of a potential enemy.

In view of the foregoing, it seems most rational to withdraw Russia from the ISS project by 2024 and to create its own ROSS orbital station as soon as possible, in the formation of which some fresh modules recently attached to the International Space Station may be involved. And the “partners” deal with it on their own.
Reporterin Yandex News
Reporterin Yandex Zen
7 comments
Information
Dear reader, to leave comments on the publication, you must sign in.