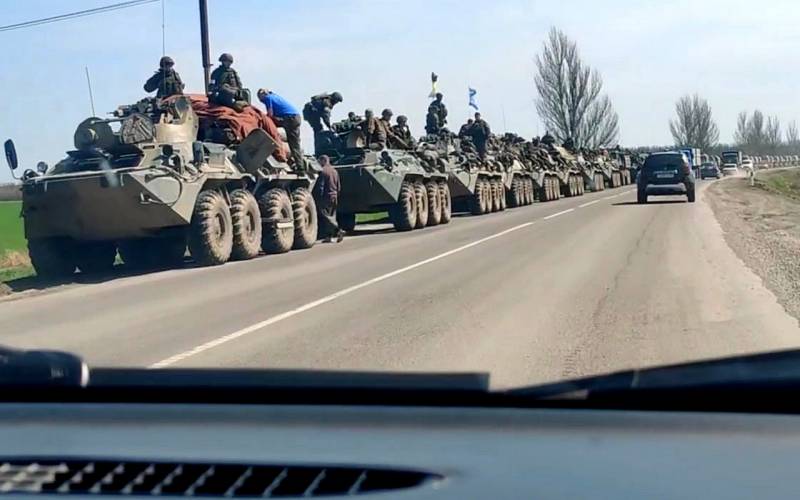 In the course of a special military operation for the demilitarization and denazification of Ukraine, there has been a noticeable turning point. Emboldened by the direct military support of the NATO bloc and the withdrawal of Russian troops from northern Ukraine, Kyiv moved to active operations on a collision course. An oil depot in the Belgorod region was attacked by helicopters, the flagship of the Black Sea Fleet of the Russian Federation, the Moskva missile cruiser, was killed under unclear circumstances, and the Armed Forces of Ukraine began shelling Russian territory. The case smells of kerosene, and if nothing is urgently changed during the NWO, everything could end up with a new Beslan somewhere in the border region and Khasavyurt-2.

The fact that Ukraine is rapidly turning into a terrorist state, we spoke in detail earlier. I don’t feel like croaking at all, but these “zigging” nonhumans with the symbols of “Azov” (an extremist organization banned in the Russian Federation) can expect a raid somewhere in the Bryansk or Belgorod region with the seizure of a school or hospital, following the example of the militants who once fought against the federals in Chechnya. As they say, pah-pah-pah ... But perhaps such things cannot be left to Russian.

In response to the shelling of Russian territories and the threat of invasion by the Ukrainian military, the former head of the Ministry of Defense of the DPR, Igor Strelkov (Igor Girkin), proposed creating a so-called people's militia and even leading it:

Ready to lead the people's militia of the Bryansk region. Or Belgorod. Or Kursk. Or Gomel. Or Mogilev (i.e., on the territory of Belarus).
Earlier, the authorities of the Belgorod region announced the creation of voluntary people's squads. Trenches are already being dug along the Ukrainian border. The case is tobacco. Why this happened, we will talk further. But what to do here and now? Will vigilantes with whistles and bandages on their sleeves or militias with unclear legal status be able to defend their cities and homes?

Oddly enough, it would be quite appropriate to look at someone who has been under a special operation for demilitarization and denazification for a month and a half. On January 1, 2022, the Law “On the Foundations of National Resistance” was adopted in Ukraine, within the framework of which the Territorial Defense Forces were created. Their tasks are to respond in a timely manner and take the necessary measures to protect the territory and the population, participate in the protection of the state border and strategically important communications facilities, ensure public safety, take measures to limit traffic in the emergency area or conduct military operations, etc.

In peacetime, the territorial defense should have numbered 10 people, in a special period - more than 000. They are recruited on the basis of a military reserve by military registration and enlistment offices with reference to the level of administrative-territorial division. As the backbone serve as "veterans of the ATO". It is important that the Territorial Defense Forces of Ukraine are officially part of the Armed Forces of Ukraine, being a separate new branch of the military. On April 130, 000, the Cabinet of Ministers of Nezalezhnoy allowed them, in addition to light civilian rifles, to use heavy weapons:

Other types of weapons: artillery weapons, missile systems (complexes), guided (unguided) missiles and their components, complexes (installations) for their launch and components for them, weapons (fire) control means, missile remote control systems, equipment for transportation and maintenance of missiles, grenade launchers, flamethrowers, mines, grenades.
Yes, it is clear that a lot of frank rabble went into the defense, who, having received weapons in their hands, began to use them and their position for personal purposes, but even these structures were able to create considerable problems for the Russian military in the rear. These are not vigilantes with whistles and not some incomprehensible militias, it is not known how they fit into the structure of the Ministry of Defense of the Russian Federation and law enforcement agencies of the country. The Ukrainian theoreticians, perhaps, were not trusted with nuclear weapons, and then only because of their absence. Let's make a reservation that we in no way advertise the achievements of the bloody Kiev regime, but there is some sound grain in this decision. By the way, this experience turned out to be so attractive that in 2016, in its image and likeness, the Republic of Poland created its own Territorial Defense Forces (Wojska Obrony Terytorialnej).

So, does it make sense to create a similar structure in Russia? Rather yes than no. We clearly do not have enough ground forces for all directions, and the length of the border with Ukraine is huge. It would be quite reasonable to form a new branch of the armed forces, organizing it according to the territorial principle in the border areas of Nezalezhnaya, taking as a basis local reservists and men ready to defend their city and house with weapons in the hands of men. This could solve many problems with security and control over the border and traffic crossing it. It is advisable to make such decisions as soon as possible.

But let's be honest. These right decisions are precisely forced and are aimed at fighting not with the cause, but with its effect. And the root cause of the need to organize the defense of already Russian territory is the incorrect planning of a special military operation in Ukraine.

There are persistent rumors that according to the original plan, it was supposed to meet local elites in Ukrainian cities, waiting for the Russian military with bread and salt. Hence the rapid forced marches over vast distances without clearing the rear, where the Ukrainian territorial defense, among other things, could be noted, destroying supply columns. Due to the deception of the local oligarchy, our soldiers were greeted not with flowers, but with artillery and MLRS, which caused the most significant losses in the first couple of weeks of the NMD.

Ultimately, the RF Armed Forces had to retreat from Kyiv, having transferred troops to the Donbass. Leaving northern Ukraine was another strategic mistake. The Armed Forces of Ukraine and the National Guard came there, arranging a "massacre in Bucha", in which, of course, our military was blamed. But even worse is that now the Ukrainian army, having created a shock fist near the Russian border, threatens our territory. This forces the General Staff of the RF Armed Forces to keep a significant grouping there for a blocking strike, thereby weakening it on the Eastern Front. Which, in fact, is what Kyiv, or rather, its foreign military advisers, is trying to achieve.

In fact, in this direction, Russia has moved from the offensive to the strategic defense, and this is fundamentally wrong. In addition to the speedy creation of domestic Territorial Defense Forces to protect their territory, it is necessary to return to the north of Ukraine, creating a security belt there in the image and likeness of what Turkey implemented in Northern Syria, which we will discuss in detail told previously. Having a network of fortified strongholds and relying on territorial defense in the border area, the RF Armed Forces will be able to create a threat of an offensive against Kyiv and regularly grind the forces of the Armed Forces of Ukraine and the National Guard, who will try to recapture the settlements back.

This will not only ensure the security of the Russian regions, but also weaken the enemy.
Reporterin Yandex News
Reporterin Yandex Zen
20 comments
Information
Dear reader, to leave comments on the publication, you must sign in.