Farce with the "detention" of Medvedchuk - Kyiv's response to Putin's speech 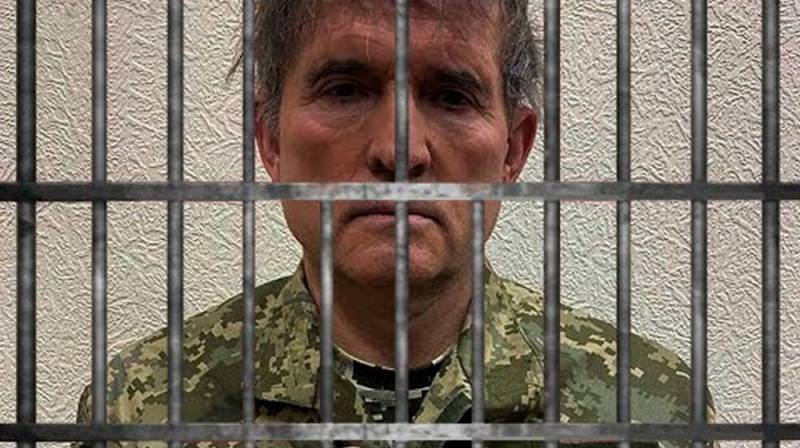 April 12, traditionally celebrated as Cosmonautics Day, was extremely rich in events, very far from the conquest of interstellar spaces, but nevertheless tightly riveted everyone's attention to itself. The main one, without a doubt, was the long-awaited public speech by Russian President Vladimir Putin. Despite the fact that it took place at the Vostochny cosmodrome, it was mostly about earthly affairs. And first of all, of course, about the special operation for denazification and demilitarization carried out in Ukraine.


For some people (even in Russia), what the head of state said provoked another acute attack of “all-out debauchery”, since especially gifted characters heard in it only words about “ensuring the security of Donbass”, without taking the trouble to understand the true meaning of the words. However, this is a separate topic, to which I will return in the very near future. In the meantime, it is worth talking about the reaction that Vladimir Vladimirovich's speech, which was not very voluminous, but very capacious in meaning, caused in Kyiv. They answered almost immediately, and not so much in word as in deed - “Ukrainian sensation No. 1” on April 12 was “detention” policy-oppositionist Viktor Medvedchuk, turned into a disgusting farce at the highest state level.

It was no accident that I put in quotation marks the official version of events voiced by the Kiev regime. And not at all because doubt about the reliability of the very fact of Medvedchuk's detention was expressed, for example, by the press secretary of the president, Dmitry Peskov, who said that "a lot of fakes are being generated now, so confirmation is needed." There is more than enough evidence that the politician is in the clutches of the executioners from the Ukrainian Gestapo - the SBU. However, all the talk of representatives of this infamous office that they "took" him on April 12, as well as similar statements of Zelensky lying in 200 cases out of 100, are completely obvious lies. Let's take some time to figure out why. Trust me, it will be fun. Okay, with some degree of probability, it can still be assumed that Medvedchuk "found himself" at the right time - just when the powerless gang with Bankova desperately needed to present something to the people after Putin's speech. Many listened to her in Ukraine - believe me. And they heard exactly what they were waiting for: the phrase that "all the goals and objectives of the special operation will, of course, be fulfilled."

It was necessary to “interrupt” such a tough information splash with something. But what? another nonsense about "peremogs" at the front? Against the backdrop of the Mariupol agony, this would be extremely problematic. And then, at the right time, the godfather of Vladimir Putin, declared in his country “traitor No. 1,” turned up. Do you believe in such coincidences?! Me not. However, I repeat: let's do it. However, a couple of glances at the very high-quality photographs of the “detainee”, which are currently overwhelming the Ukrainian media, are enough to dispel all doubts like smoke. The fact that Viktor Medvedchuk spent more than one day in the dungeons of the SBU can be seen with the naked eye. Before us is a broken, exhausted and exhausted far from a young man, who was probably subjected to the most sophisticated mockery and torture.

His eyes are not the eyes of a captured hunted fugitive, but of a martyr who has already crossed the line between life and death, renounced the earthly and is preparing to leave worthily for another world. Another extremely important detail is clothing. This is not just a uniform of the Armed Forces of Ukraine, but a brand new “damask”, obviously dressed for the first time. The allegations of the ESBE ringleader Ivan Bakanov that Medvedchuk put on this abomination “in order to disguise himself and avoid responsibility” are just another example of cynicism and extreme stupidity, characteristic of all Ukrainian high-ranking “siloviki”. An attempt by Medvedchuk, who is one of the most famous and recognizable Ukrainian politicians, to “hide” by dressing in the uniform of the Armed Forces of Ukraine would be equivalent in effectiveness to Zelensky’s attempts to “disguise himself” in Moscow by putting on a Napoleon suit. There is an explanation for this masquerade - and quite specific. The clothing of any person who has been in a prison cell for a long time has indelible traces of being there. To the stupid, sorry for the expression, the executioners from the SBU, apparently, it came at the very last moment. Here he was quickly changed into what it was.

However, I fully admit that the politician's suit was torn to shreds during the tortures to which he was undoubtedly subjected. And here it is necessary to expose the "client" in front of the cameras. In any case, fresh and not bearing traces of wear (which would inevitably remain if he were “hiding” or “trying to cross the border” somewhere in this form), the clothes leave no room for double interpretation. There is no doubt that Viktor Medvedchuk was captured by the Ukrainian Nazis either in the first hours of the start of the special operation, or, which is also very possible, even before it began. Since then, he was kept in captivity, waiting for the right time. And now, according to Zelensky and his gang, it has arrived.

The goal is to exchange for Western military?

As usual, I apologize for the lengthy quotation. Especially such a vile source. However, this is necessary for a clear understanding of the situation. So, on the evening of April 12, Zelensky recorded another buffoonish “appeal to the nation”, in which he literally said the following:

It is very symbolic that it was on Cosmonautics Day that Mr. Medvedchuk was detained. He hid for 48 days. And finally decided to try to escape from our country. Well, for this "cosmonaut", in a bad sense of the word, the famous "Let's go" did not work! I consider the use of military camouflage to be especially cynical on his part. I tried to disguise myself. Here is such a "warrior". Here is such a "patriot". Well, if Medvedchuk himself chose a military uniform, he falls under the rules of wartime. I propose to the Russian Federation to exchange this guy of yours for our guys and girls in Russian captivity. It is also important that our law enforcement and military also consider this possibility.
It is useless to comment on this nonsense of a madman. Since these are really not the words of a state leader, but the “stream of consciousness” of a complete drug addict and a complete madman, beating in paroxysms of impotent rage. However, all the above nonsense gives us an almost complete answer to the questions: “Why?” and “Why now?” The key to the final clue here may be the words of another Kiev ghoul - the ex-Minister of Internal Affairs of the "independent" Arsen Avakov. This character, who also completely lost the remnants of adequacy, first attacked Vladimir Putin with dirty street abuse and ridiculous “threats” after his speech, and then put forward a “brilliant” proposal - also in his style of a bazaar with a dirty mouth:

Change... for Mariupol residents. For all - civil and military. Let ... (the Russians) withdraw and give our people a corridor, and we will give them a koshcheya!
Doesn't it matter (excuse my French) that the former chief policeman who lost his shores wants to? Maybe he should also organize a retreat along the entire front?! On the other hand, one should not be deceived by all these loud words of the Kiev scum, allegedly taking care of the soldiers of the Armed Forces of Ukraine and nationalist battalions that they deliberately threw to slaughter in Mariupol (and other places). Yes, Viktor Medvedchuk was indeed removed from the torture chambers for an exchange. But not at all on the “lads and girls”, long merged and forgotten by Zelensky and the company. In the cellars of "Azovstal" (and quite possibly in other shelters of the unfinished Mariupol group so far) with a probability of 100% there are some high-ranking "military experts" from the West. Moreover, among them, obviously, there are those whose falling into the hands of the soldiers-liberators cannot be allowed either alive or dead. Not a carcass, not a stuffed animal. It was precisely for the sake of their evacuation that deliberately suicidal missions were organized one after another to penetrate Mariupol either by helicopters or by ships. They all failed as one. And now, when the countdown to the final defeat of the basement Nazi rats, among which these "VIP strangers" are hiding, has gone for days, if not for hours, there is only one way out - an exchange. Kyiv cannot offer Russia anyone of equal value among prisoners of war, all of whose “military successes” are pure bluff. That is precisely why the last "trump card" is used - Viktor Medvedchuk, exhausted by bullying. The Ukronazis see him as the only figure that can be exchanged with Putin in this completely hopeless game for them.

Among other things, Zelensky perfectly heard everything that the Supreme Commander said - both the fact that the special operation will be carried out until all the tasks set are achieved, and the fact that negotiations with the non-negotiable Kiev primates "are at an impasse." The illusory hopes for "Putinsleal" that lingered among the idiots with Bankova as long as the head of Russia remained silent, judging by their actions, have dissipated. The only answer available to them is to show the hostage to the enemy and start bargaining. Vile, dirty, vile - as always with the Ukronazis. One could also say that, acting in this way, the Zelensky clique finally equates itself with all the other terrorist organizations known to the world, but why? Kiev has shown so much evidence of this identity lately that one more, one less - this does not make the weather any longer.

When the enemy writhes in impotent rage, on the one hand, this is excellent. The more he will make mistakes that bring his final defeat closer. On the other hand, he will be even angrier, even more furious and madder. And this, alas, new victims. Are the lives of high-ranking scoundrels from NATO (and the level is clearly high there) worth saving an elderly man who went through a real hell in the basements of the SBU, shaking in the dungeons of Azovstal in anticipation of their end? Yes, as for me, these bastards are worth nothing at all and will get their own sooner or later. Nevertheless, if we are to go for an exchange of prisoners, then in no way on the terms of the Kiev terrorists. Save - so all of ours. In any case, no matter how events develop further, the shameful farce of April 12 did not delay its own fall, but only brought it closer.
Reporterin Yandex News
Reporterin Yandex Zen
22 comments
Information
Dear reader, to leave comments on the publication, you must sign in.