Russia may become a new world center for civil aviation 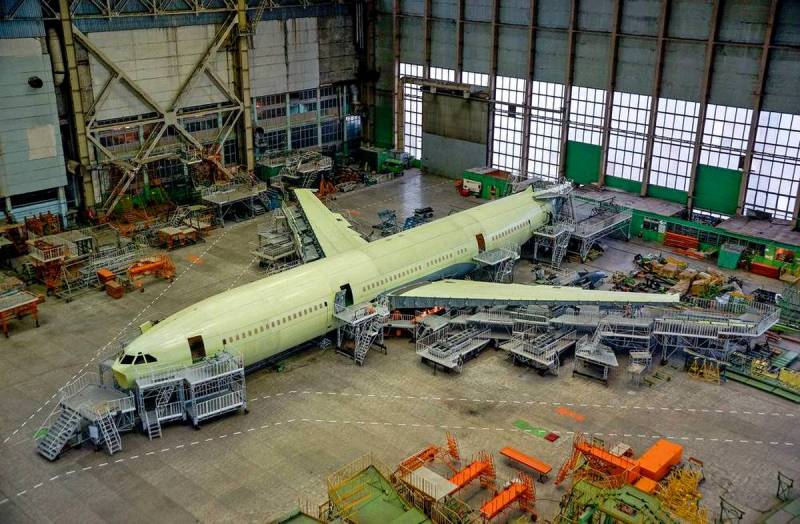 One of the main complaints against our "sislibs" is that they have driven the domestic aircraft industry into international cooperation on extremely unfavorable conditions for the country. As a result, aircraft of Soviet designs were undeservedly forgotten for many years, and after the introduction of Western sanctions, remakes in the face of the MS-21 and the Superjet were left without the lion's share of imported components. Now they rushed to resume mass production of the Tu-214 and Il-96, which, it turns out, are "normal, they fly." But is it possible to turn the situation with dependence on imports in the opposite direction in the future?


Strictly speaking, a scheme with a SKD "screwdriver" assembly of a foreign equipment is one of the effective tools of the so-called soft power. Car kits or components for aircraft are produced at foreign enterprises, providing them with jobs and GDP growth. The country where the assembly is carried out with a minimum degree of localization, de facto turns into economic colony of the West. Go and then yak if its “industry” can be stopped at any moment by stopping the supply of materials and components. Russia has now blabbed, and only thanks to the presence of the Soviet legacy, which is still preserved, we will not be left completely without aircraft now. Handy "galoshes"!

But we asked ourselves the question - is it possible to make it so that others depend on us technically and that Moscow, at its own request, could block the supply of components to "unfriendly countries", influencing their policies? Let's try to simulate this situation in the aircraft industry, since we are talking about it.

Not everyone knows, but in 2007-2008 the Islamic Republic of Iran was going not only to buy a batch of Tu-214 and Tu-334 aircraft, but was also, in all seriousness, interested in acquiring a license for their production from itself. For some reason, the Iranians liked our "Soviet galoshes", and they wanted to establish their SKD assembly with subsequent gradual localization.

Within the framework of this contract, the most advanced version of the Tu-204SM airliner with a modernized PS-90A2 engine was developed in Ulyanovsk. The cost of a license for its production was then estimated at 3 billion dollars, so far no information has been found regarding the Tu-334. Decent money for "Soviet junk", which in fact turned out to be not so worthless junk.

Tu-204SM even today is quite competitive with Boeing and Airbus products, and with the Russian remake MS-21. This is largely due to its PS-90A2 engine, which has become more powerful (afterburner thrust up to 18 kgf versus 000 for the PD-14), lighter, more economical and more reliable than its predecessor PS-000A. The deal with the Iranians fell through due to US pressure, since American technology was used in the development of the PS-14A90. However, the Permians solved this problem by purchasing the rights to intellectual property and replacing the components with domestic ones. This is how the excellent PD-90A2 aircraft engine appeared, 90% Russian, having all the certificates, but for some reason it never went into production.

The question arises: why not return to that deal with Tehran in the new geopolitical realities? Nobody in Moscow cares about Uncle Sam's opinion on this matter. What can this give our country?

At first, 3 billion dollars, and now, perhaps even more, will not be superfluous, plus a contract for the Tu-334.

Secondly, we have some personalities here who are afraid that we can get carried away with the "junk" and forget about the remakes in the face of the MS-21 and the Superjet. No need to be afraid. The MS-21 is not going anywhere, the future is with it, but it may well get along with the Soviet liners in the following way. Thus, 2030 medium-haul Tu-70s will be assembled in Kazan by 214. But Aviastar-SP could well sell a license for the Tu-204SM to Iran and set up the production of components for it. Let's say the degree of localization should be 50%, and the remaining 50%, including the power plant, will be produced in Russia. Under this project, it will finally be possible to put into production the excellent PS-90A3 engine, which will go both to the Tu-204SM / Tu-214 and the Il-96-400 (in the four-engine version before the advent of the PD-35).

Thirdly, Russia will thus deepen economic cooperation with the Islamic Republic, and Moscow will gain leverage on Tehran, strengthening its influence in the Middle East.

Similarly, you can do with the short-haul Tu-334. At one time, we refused this promising aircraft, and under pressure from the "syslibs" the bet was made on the "Superjet-100". Now we see what the dependence on imported components has led to. The problem with Ukrainian engines can soon be solved by the promising PD-8. By selling a license for the Tu-334 to Iran, Russia will be able not only to make money on the deal, but also to revive the production of components by selling them to the Islamic Republic.

Who knows, maybe in the future this “galosh” will be useful to us too.

There is also an opportunity to seriously depend on oneself and the Middle Kingdom. This can be done as part of the joint project of the CR929 wide-body long-haul airliner. How we detail told earlier, the Americans and the British would most likely refuse to supply their engines for the production of this aircraft. The Chinese do not have their own heavy-duty power plant and it is not clear when it will appear.

Russia has developments on the powerful PD-35 aircraft engine, which will be able to put it into production before the end of the decade. Judging by the information available in the press, Beijing is very interested in localizing the production of PD-35 in China. Naturally, you can not do this in any case! Russia should participate in the project by supplying composite wings and power plants to China.

So what do we see. There are at least two promising aircraft construction projects in which our country is indispensable. Having launched them, it will be possible to earn for many years by loading domestic enterprises with orders for components. After the launch of the MS-21 series, the Tu-214 will go to the needs of the military, which we will also discuss in detail. told earlier.

As for aircraft engines, it is obvious that the existing capacities in Perm will not be enough for this. We will need hundreds of PD-8s for the Superjet, Tu-334, Be-200, hundreds of PD-14s for the MS-21, hundreds of PD-90A3s for the Tu-204SM and Tu-214, over two thousand PD-35s for the CR929 and our twin-engine Il-96-400 (after its remotorization). This means that new construction enterprises will have to be created, where aircraft engines will be mass-produced. It probably makes sense to do this in the format of a joint venture with Iran and China. Naturally, in Russia!
Reporterin Yandex News
Reporterin Yandex Zen
29 comments
Information
Dear reader, to leave comments on the publication, you must sign in.