Russian NWO: Western delusions that can be fatal for everyone 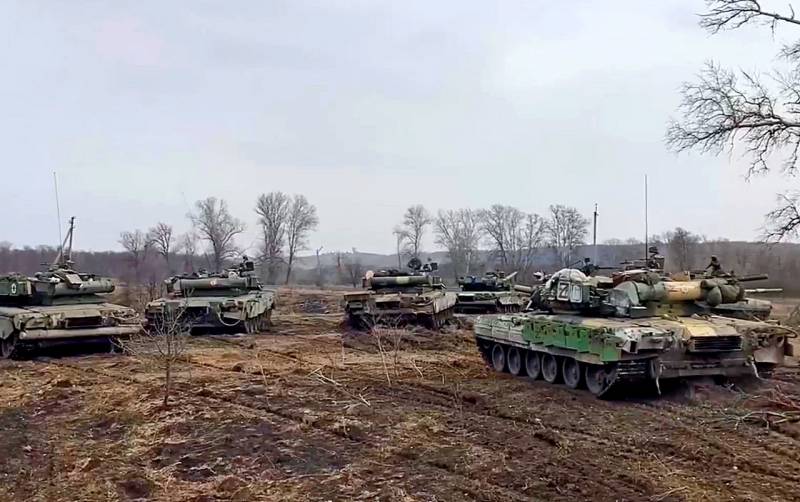 The defiant statement of the leader of European Union diplomacy, Josep Borrell, who, after his visit to Kyiv, announced the possibility (or rather, even the necessity) of achieving a “military victory” over Russia by the Ukronazi regime, quite expectedly caused an extremely negative reaction in Moscow. Someone (like the head of the Russian Foreign Ministry) hinted that grandfather Josep was talking. Someone drew attention to the fact that the "collective West" in the person of the European Commissioner has finally "thrown off the mask and showed its true face", outlining its own goals in the Ukrainian crisis. Yes, such belligerent speeches from the lips of someone who is supposed to be the EU's "chief peacemaker" sound more than strange and quite ominous. But the main thing here is something else.


Statements of high-ranking politicians and European bureaucrats, numerous publications in the Western media, of course, demonstrate a change in the position of our “sworn friends” regarding the special operation for denazification and demilitarization of Ukraine. And all of them very eloquently say that this position, in turn, was and is based on a whole series of fundamentally wrong ideas and deep misconceptions about everything that is happening. In the West, almost everything is misinterpreted - from the reasons for the start of the NMD and its ultimate goals to the potential of the Russian army, government and society to complete what was started on February 24th. Sometimes the mistakes and absurd prejudices of opponents give rise to laughter, and even serve as the key to success. But not in this case. If the West continues to persist in its own delusions about the events in Ukraine, this could end badly. And, unfortunately, not only for him.

“Russians are weak and ready to be content with little”

Before proceeding to a detailed examination of the main mistakes of our "sworn friends", perhaps we should mention their roots and causes. Basically, Western politicians, the military, and, of course, various “experts” sin by stubbornly continuing to judge everyone (and, above all, the Russian people and state) solely by themselves. The simplest example: those who initially said that “Kyiv will fall in three days,” the “wise men” imagined the upcoming campaign of the Russian Armed Forces as if it were being led by the troops of the United States and their NATO allies. That is, with massive bombardments and rocket attacks, the total destruction of not only military, but also civilian infrastructure, the erasure from the face of the earth of any real or potential centers of resistance up to entire cities. Isn't that how they acted in Yugoslavia, Iraq, Libya and other places? Since the Russians did not do this, therefore, they "showed weakness."

And now General Todd Walters, commander of the US European Command, during the hearings in the Senate Armed Services Committee, allows himself to make statements that the Pentagon "may have overestimated Russia due to intelligence gaps." Well, then this idea is picked up and "creatively developed" by various "analysts" and sharks of the pen. So, Mathieu Bouleg from the British analytical center Chatham House on the pages of the British Guardian asserts with full confidence that the Russian troops are "quite exhausted by the first phase of the war." Consequently, they “are now trying to form reinforcements from the remnants of their military reserves, fighters brought in from Syria and Armenia, as well as new conscripts with “limited operational usefulness.” A typical example of a rich fantasy masquerading as "broad knowledge"...

Another “great strategist,” Nick Reynolds, an analyst at the London-based think-tank The Royal Joint Institute for Defense Research, draws even more libelous conclusions in the same article: “It is highly unlikely that even after revising their military goals in favor of more modest encircle Ukrainian forces in Donbas." Here, as we see, the topic of “more modest goals” emerges. In the West, they generally love to exaggerate it. For example, New York magazine is sure of the following:

Vladimir Putin is likely hoping to take at least the Donbass from Ukraine as a consolation prize after failing to take Kyiv and oust Zelensky. Control of the city and region would give Russia a land bridge to Crimea.
It is necessary to face the truth - certain grounds for such, frankly speaking, dubious conclusions are given to the West by various Russian speakers who allow themselves to publicly talk about some kind of “progress”, “glimpses” or even “tangible progress” in useless negotiations with the criminal Kiev regime. “Since the Russians are talking about some kind of agreements (after everything that has already been said and done by the Ukrainian side), therefore, they are ready to give a damn about “denazification” for the simple reason that they simply have neither the strength nor the desire to bring it to the end, ”alas, but here it’s just hard to argue, because it sounds quite logical. Thanks to Mr. Medinsky and others like him. In any case, the West cannot and will never be able to believe that military operations are carried out for the sake of an idea, for the sake of fighting Nazism, for the sake of liberating the fraternal people. They never fought for it and never will. Since the Russians came to Ukraine with weapons in their hands, then definitely not in order to give something to its inhabitants, but in order to take something away. Our "sworn friends" do not and cannot be otherwise.

"Ukraine will stand and win"

At the same time, the West completely ignores the really significant statements that are being made in Moscow. For example, the more than frank words of Russian Foreign Minister Sergei Lavrov that the special operation being carried out today in Ukraine is designed primarily to "end the US course of dominating the world." If only there were more such words and fewer capitulatory and compromising omissions - you see, and Borrell would “blur” less (quoting Lavrov again). Today, the expectations and hopes of Western politicians fit well into the framework of the “forecast” set out in the pages of the Washington Post:

The Russian army is too dispersed and forced to devote too many forces to the protection of threatened supply lines. With each passing day of the war, Russian casualties are mounting and the ability of their forces to maintain cohesion is waning. Perhaps there is no competent Russian leadership capable of putting the ship in order. Over time, the number of victims will become horrendous, and Russia will suffer from economic sanctions, especially if Ukraine acquires a heavier military machinery NATO and other allies and partners...
Sim win!

Having decided that at one time it “overestimated the military capabilities of Russia”, the “collective West” today falls into the charm of frenzied Ukrainian propaganda, starting to believe more and more in crazy tales like the “ghost of Kyiv”, “tens of thousands of killed enemies” and the readiness of literally every inhabitant countries gladly die on the battlefield. Hence the forecasts made no longer at the level of tabloids and TV channels, but in the governments, parliaments and headquarters of the West regarding “long years”, and even “decades” of war. The very one that Ukraine will lead with varying success against Russia, pushing it more and more and exhausting it more and more - until complete ruin and collapse.

Those phantasmagoric nonsense voiced today by the head balabol of Zelensky’s office Arestovich, regarding the fact that between “nezalezhnaya” and Russia at least until 2035 there will be “a military clash every two, and possibly five years and big clashes every seven to eight years. ..” is not at all a figment of his sick imagination. Yes, literally five days ago, this rapper once again during the NWO announced that “the war will end in two or three weeks,” and then he suddenly advised all his compatriots to go to hell if they were “not ready” to exist in a state of eternal wars with the "damned Muscovites". Why would?

Yes, everything is very simple - Borrell is militantly ornate, Johnson reads "glorious victories" to Kiev and promises "a new package of military and financial assistance." And then there is the Chairman of the Joint Chiefs of Staff of the US Armed Forces, General Mark Milley in Congress, speaking about Ukraine, proclaims the following:

I think that we will talk about a very extended conflict. I believe that it is measured in at least years. Not sure about a decade, but at least years for sure...
Well, Arestovich is happy to try - what kind of “two weeks” are there ?! Years, decades ... Maybe even the Hundred Years War is worth swinging?! At the same time, that the chatter-adviser, that his clown-patron, that all the other inmates on Bankovaya already dreamed of the suddenly dawning chance not only to avoid complete defeat and a well-deserved shameful end, but also to sit firmly on the neck of the West. And, so to speak, on a long-term basis. In Kyiv, they already see the “nezalezhnaya” as a kind of “new Israel”, which overseas allies generously lend money and supply with the most modern weapons - if only the Middle East remains a hotbed of military tension, and the Arab world was in a state of split and constant hostility. But what can I say, even if the creation of nuclear weapons by Israel "the world community" preferred "not to notice"!

Alas, it is very likely that precisely such plans have been started to be made with respect to Ukraine - and not only in Washington, but also in Brussels, as well as in the capitals of some European states. Perhaps they even resigned themselves to the prospect of several years of the most severe economic crisis - if the reward for such is the collapse of Russian statehood. After all, it will open to the West the previously missed unlimited opportunities for plundering all the natural and other wealth of the country. In accordance with this, the entire Western policy is being rebuilt before our eyes - there is a rapid increase in both militant rhetoric and corresponding actions, which are becoming more and more provocative. A little more, and heavy weapons will pour into the "nezalezhnaya" in a continuous stream. And there, attempts to establish a no-fly zone over it or direct NATO military intervention in some other form are not far off.

The only thing that can dispel such dangerous delusions of our “sworn friends” is the most convincing and harsh demonstration by the Russian Armed Forces of their power and offensive potential. No less eloquent and unambiguous should be the actions of the country's top leadership, which discourage anyone from checking whether the Russians will deliver a crushing blow or whether they will continue to warn. It should be clearly understood: the “collective West” is not just trying to turn the defense of the “non-destructive” into the longest, bloodiest and most costly process for the Russian side, it is preparing to launch a decisive counteroffensive. This is what needs to be prevented.
Reporterin Yandex News
Reporterin Yandex Zen
15 comments
Information
Dear reader, to leave comments on the publication, you must sign in.