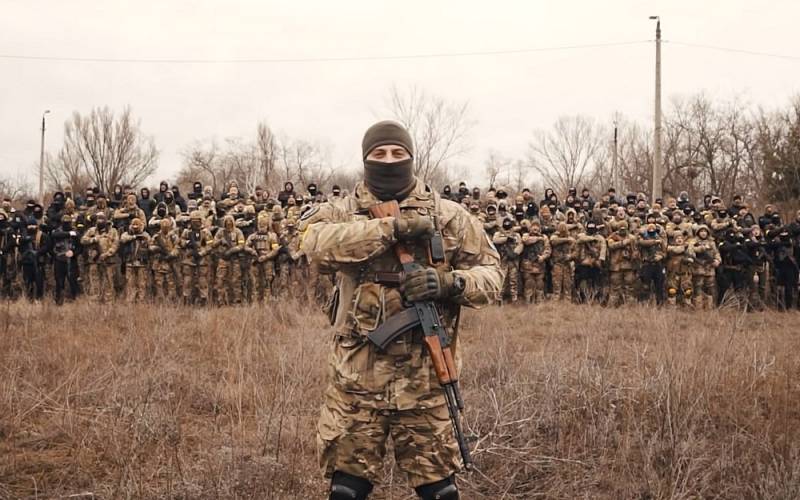 On September 30, 2015, Russia launched a military operation in Syria, the task of which is to fight numerous terrorist groups. Despite the fact that it has already been announced three times that it was curtailing and withdrawing its military contingent, its numbers are only increasing. On February 24, 2022, President Putin announced the launch of a special military operation to demilitarize and denazify Ukraine. Probably, it would be correct to correct its name, since Russia is no longer confronted by a “liberal European state”, which Square tried to pretend to be, but a real terrorist one.


As for the terrorist nature of modern Ukraine, this is by no means an exaggeration. Let's remember the most resonant crimes of the ruling Nazi regime.

"Ukrainian state of Lviv and Ternopil" (permitted in the Russian Federation)

The current Nazi Ukraine was born in the course of a coup d'état in blood, in blood and will leave. During the Maidan, the so-called “onizhedeti” with impunity beat the Berkut with rebar and chains, burned it with Molotov cocktails, and killed its fighters. The culmination of this bloody orgy was the mass execution of Euromaidan participants by "unknown snipers." This gave rise to the creation of a new Ukrainian myth about the “Heavenly Hundred”, where even people who died at the same time from other causes, such as heart attack, pneumonia, allergies, hypothermia, and even as a result of suicide, were voluntaristically recorded. Here is how the former Minister of Justice and Honored Lawyer of Ukraine Elena Lukash later commented:

For example, Olga Bura worked in the Maidan kitchen while suffering from hepatitis. She cut her finger - she did not survive the painkiller injection. They made her a hero of Ukraine! The man who died from a lidocaine injection by cutting himself with a tin can! Hero of Ukraine!
But let's move on from farce to a real tragedy, monstrous in its cruelty. This, of course, is the massacre of pro-Russian supporters of the federalization of Ukraine on May 2, 2014 in the Odessa House of Trade Unions. People were herded into the building, doused with a combustible mixture and set on fire. According to official figures, 42 people became their victims. There are also unofficial ones, according to which the bill can go into the hundreds. It is assumed that many more people were tortured and killed in the basements of the House of Trade Unions, then Ukrainian nonhumans dismembered their bodies and carried them out in bags.

Then there was the tragedy of May 9, 2014, when on Victory Day, sacred for the Russian people, supporters of federalization in Mariupol were shot and crushed by tanks.

From April 6, 2014 to the present day, one big ongoing crime under the mocking name "Anti-Terrorist Operation" (ATO) has been going on. To deal with the DPR and LPR, created in the course of the popular will, Kyiv sent the Armed Forces of Ukraine and numerous so-called “volunteer battalions” assembled from Nazi rabble. For the past 8 years, Ukrainian artillery has been continuously shelling the peaceful cities of Donbass. Tens of thousands of people have already died and been maimed, and this crime is still going on, which can only be put to an end by the Armed Forces of the Russian Federation during the SVO. Let us recall only the most monstrous episodes in their cynicism.

For example, on June 2, 2014, a Ukrainian aircraft launched an airstrike on the building of the Luhansk Regional State Administration in order to kill the head of the LPR, Valery Bolotov. As a result, 8 people were killed and 28 more were injured. Kukurudza Inna Vladimirovna had her legs blown off by an explosion, and she died from blood loss in the arms of her daughter in an ambulance. Footage of this crime can still be found on the Web. Nonhumans from Nezalezhnaya later said with an approving chuckle that it was "the air conditioner exploded." Max Barskikh, Ivan Dorn and Dima MONATIK, why didn't you write something whiny on camera to shame and stop the Armed Forces of Ukraine?

And on July 27, 2014, the Gorlovskaya Madonna appeared. As a result of repeated shelling of Gorlovka by MLRS, many local residents were killed, and this is how Ukrainian journalist Oleg Zhelyabin-Nezhinsky describes what he saw:

What he did, he took off. Almost the first thing I saw was this dead woman with a child. A young girl, about 20 years old, just carried a child in her arms through the park. Nearby is a guy with a large travel bag. Maybe they were trying to get out of the city. I'm coming. These three corpses lie. The guy has no head. A man is lying, completely intact, but half a head is missing. Where did these missiles go? It was the square of Heroes. These people were walking along a path in the park. There are no military facilities there, at least I haven't seen any. Ordinary park.
On March 14, 2022, after the start of the JMD, the Ukrainian military launched a missile attack on the center of Donetsk from the Tochka-U OTRK. The banned cluster part of the warhead exploded, killing 23 civilians and injuring 37.

If your families must be slaughtered to win, I will be the first to do it.
On April 2, Ukrainian journalists recorded numerous bodies of dead civilians in the city of Bucha, which they immediately blamed on the Russian military, who had left the Kiev region a few days earlier. There is not the slightest doubt that these people became victims of shelling by the Armed Forces of Ukraine in the city, as well as Nazi reprisals against those who were suspected of collaborating with the RF Armed Forces.

On April 4, the mayor of the city of Dnipro (former Dnepropetrovsk) Boris “We will hang later” Filatov published a post on the social network with the following content:

It's time for cold fury. Now we have the full moral right to calmly and with a completely clear mind to kill these non-humans all over the world, an unlimited amount of time and in the largest possible quantities.
On April 5, the Armed Forces of Ukraine blew up a tank with hydrochloric acid in the territory of the city of Rubizhnoye in the LPR in order to carry out a terrorist attack against local residents. Here is how the official representative of the People's Militia of the LPR commented on this information:

Today, by blowing up a tank with hydrochloric acid in shop No. 1 of the Zarya production association, a cloud of a poisonous substance has been spread in the Zavodskoy district of the city, where over 10 thousand people live.
The day before, on April 8, 2022, the Ukrainian military committed another terrorist act against their fellow citizens located on the territory under their control in Kramatorsk. Here is how the official representative of the RF IC Svetlana Petrenko comments on this:

On April 8, 2022, servicemen of the 19th Separate Rocket Brigade of the Armed Forces of Ukraine carried out targeted shelling of civilian objects near the railway station of the city of Kramatorsk.
Dozens of Ukrainian citizens were killed and wounded.

On April 9, Verkhovna Rada deputy and former head of the SBU Valentin Nalyvaichenko publicly promised to catch and kill the Russian military after the completion of the SVO:

If there is an opportunity to bring them to criminal responsibility within the framework of a future court session, well, if not, then they need to be destroyed as terrorists, wherever they are.
It is already well known how the Armed Forces of Ukraine and the National Guard treat Russian prisoners of war: they mock, torture, mutilate, shoot or slaughter without investigation or trial. Now they are going to take revenge on them after the completion of the special operation and the signing of a peace agreement with Ukrainian partners. By the way, I would even like to thank Mr. Nalyvaichenko in some way, who confirmed forecasts the author of the lines that if the SVO ends now without liquidating the ruling Nazi regime in Kyiv, then Ukraine will turn into a full-fledged terrorist state using the methods of the Israeli special services. To the place would quote himself:

And let's not forget about a very unpleasant feature of the Israeli external policy, which partner Zelensky likes so much. Ensuring its national security, the IDF launches preventive strikes on neighboring Syria, destroying Iranian military infrastructure there, without even declaring war on Tehran. Moreover, the killing of Iranian physicists involved in the nuclear program is considered completely normal. And what will prevent the Ukrainian special services from killing Russian scientists, talented designers who develop weapons, high-ranking military men, etc. in the future?