Obsession in Ukrainian: top 5 news that is hard to believe 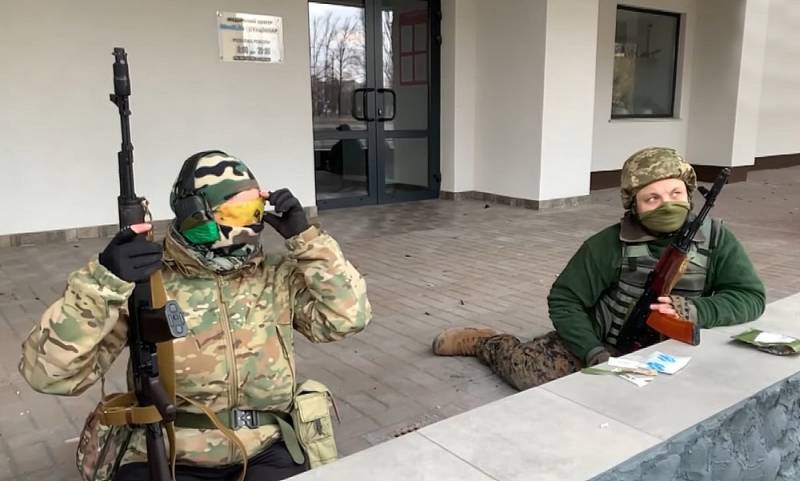 For a long time I did not please our readers with fresh ratings and selections of "particularly outstanding" pearls from the inadequate Kiev regime. It's time to fill the gap. And let the local propagandists and functionaries scream from every iron that from the moment the special operation for denazification and demilitarization began, the “nezalezhnaya” was embraced by an “unprecedented rise in national self-consciousness” and an unprecedented “splash of patriotism” that had never been seen before, in fact, everything that happens looks completely different. Especially if you look from the inside and with the sober look of a sane person.


Everything that happens in the territories still controlled by Kiev can be most easily (and more correctly) described in one single word: insanity. Madness is caustic, sticky, contagious, cultivated and inflated with all its might by those whom it allows to remain in power, increasing pain and suffering in the “state”, gripped by agony, more and more resembling a ward of a madhouse. And in the department for particularly violent patients. The main obsessed madmen here are clearly the members of Zelensky's criminal clique. Well, the rest ... Judge for yourself from the following.

The pagan sect of witnesses Javelin the All-Crushing and Bayraktar the Invincible, thanks to false propaganda, was formed in the “nezalezhnaya” even before the start of the NWO. However, then it seemed to include not so many mournful heads of citizens and women who firmly believed in the incredible and supernatural capabilities of overseas anti-tank systems and UAVs. It would seem that with the outbreak of hostilities, which convincingly showed that all these delights were at least greatly exaggerated, the number of such an audience would have to decrease even more. But where is it! This is Ukraine. In truth, I took the first reports in Ukrainian media that the names Javelin and Bayraktar were given to newborn children by especially bruised "patriots", I took it as another fake. “You never know what they talk about the country of barbarians ...” As it turned out, in vain.

I quote the official message from the Ukrainian Ministry of Justice:

For some, when choosing a name for their babies, the decisive role was played by the war, in which Ukrainians have been fighting for the independence and sovereignty of our state for the second month. So, in the Vinnitsa region and Kyiv, the newborn boy and girl were named Yan Jevelin and Javelina, respectively ...
Well, what can I say? Children named in this way will face an unenviable fate when the current events end in a completely different way from what their mothers and fathers see. However, here the matter is fixable - they will also have time to change their name, and bring them up as normal people. But what to do with such "parents" and those who registered such "names"? I'll leave the question open...

Before the Russian troops had time to temporarily leave the territory of the Sumy region, the local head of the regional military administration, Dmitry Zhivitsky, cheered up, perked up and began to gush with "brilliant" ideas. In particular, he made the following statement:

Until we build a wall, like between the US and Mexico, or even many times larger and more powerful, the threat to the Sumy region, unfortunately, will remain. As long as there is no such wall, it is very difficult to predict anything!
According to the head of the OVA, “the issue has been discussed since 2014, but nothing has been done in eight years.” I wonder for what reason? The corresponding funds were not allocated by the state, or were they successfully plundered, which is much more likely? This is exactly what happened with the famous “Yatsenyuk wall”, which, I remember, was also “built” since 2014. Nothing good came of this, of course, but no one dares to calculate how many billions "thumped" into this undertaking. By the way, something was not heard that this creation of "Seni-Kulyavloba" played some role during the NWO - someone was stopped or at least delayed. In this case, one can only guess whose laurels haunt Pan Zhivitsky - ex-US President Donald Trump, who raved about the "Mexican wall", or, after all, Arseniy Yatsenyuk, who made a fair amount of his own fortune on such a senseless construction site?

Undoubtedly, the most important issue that should be dealt with in this difficult time for Ukraine by its parliament, as well as other authorities, is the complete and final de-Russification of this unfortunate territory. In any case, on April 5, the draft law No. 7253 on amendments to the Law of Ukraine “On Geographical Names” was submitted to the Verkhovna Rada. The purpose of such, according to its authors, is to “decolonize” toponyms, that is, to remove all elements associated with Russia from street names.” It should be noted that this initiative was warmly approved and immediately picked up by many especially inadequate officials. So, the head of the Kiev Metropolitan KP, Viktor Braginsky, turned to the mayor Vitaliy Klitschko with the initiative to rename 5 stations of the capital's subway:

Our people take refuge in the "Friendship of Peoples" while this so-called friendship of peoples kills their fellow countrymen, neighbors, relatives and destroys our country. This cannot be!
Interestingly, according to the frisky metropolitan, not only the station, for example, Leo Tolstoy, but also Minskaya (Belarus is also an enemy!), And also, which is very significant, Heroes of the Dnieper, are subject to unconditional renaming. The latter is named after those who liberated Kyiv in 1943 from the Nazi occupation. Nazism in Ukraine? What are you talking about! There is no Nazism there... On the next high wave of Russophobia, the classics of Russian culture quite expectedly fell under the distribution. So far, Alexander Sergeevich Pushkin has got the most. His monuments and memorial plaques were dismantled with great pomp in Uzhgorod and Mukachevo, the settlements that clearly suffered the most damage during the NWO. Local Bandera and haters of the "damned Muscovites" finally waited for their finest hour.

One of the most serious problems for the Kiev regime is the great difficulty in replenishing the personnel of units and subunits of the Armed Forces of Ukraine, which are regularly thrown to the slaughter and suffer heavy losses. The country has already begun the third wave of general mobilization, during which the so-called jackets are subject to conscription - poor fellows who received officer ranks after more than dubious training in the military departments of purely civilian universities. Next in line, most likely, is the fourth wave, when everyone will start rowing indiscriminately. Except perhaps for the very old and the obvious cripples. And even that is not the fact that they will not be touched.

At the same time, tens (if not hundreds) of thousands of men of quite military age ended up outside Ukraine in the very first days of the special operation. The vast majority of these "patriots" prefer to sit out in safe Europe and "fight" there, clinging to all the counter and transverse demands to speak with them in a "movie", as well as dirty tricks, painting everything they can reach in yellow and black. However, some of the men who initially left with their families for the cordon to the country, perhaps, would have returned. However, this is unlikely to happen now - after the "brilliant" speech by the Secretary of the National Security and Defense Council of Ukraine Oleksiy Danilov. On the air of the next "patriotic" telethon, he issued literally the following:

When someone returns to the territory of our country, we will clearly understand when he left it. All the people who left our country, they are recorded. Everyone who will return to Ukraine from those who left after February 22 will be detained and will have to explain through which point they left the country and on the basis of what legal documents!
In a word - welcome home - either to the penal battalion, or immediately to prison for "treason." I will allow myself to assume that after such a "hospitable" invitation, there will not be anyone who wants to do this at all.

In Ukraine, more than once or twice, the topic of the colossal harm caused by the machinating and, in fact, no one, in fact, controlled "territorial defense" has been raised. At the same time, mind you, this is not at all about the damage that these bandit formations recklessly armed by the state inflict on civilians. No, any murder or robbery of civilians by "thugs" from the "terodefense" is either simply hushed up or declared "the destruction of enemy sabotage groups." However, indignant voices of representatives of the Armed Forces of Ukraine and other official "power" structures are increasingly heard in their address. In Ukrainian social networks and the media, the appeal of a serviceman is circulating with might and main, claiming that quite a few of his colleagues have already fallen from the clutches of the “terodefenders”, and naming specific places of battles with them. According to the author of this appeal, "stupid people" manage to shoot down even helicopters of the Armed Forces of Ukraine, "and no one even counts drones." The text ends with a call to "immediately take away the weapons from the madmen who do not know where the fuse is," and after the end of hostilities, erect a monument to those "who were killed by the idiots." As usual in Ukraine, in reality everything is done exactly the opposite.

On April 6, the Cabinet of Ministers, instead of disarming illegal military formations that sow death and chaos... expanded the list of permitted weapons for territorial defense by its Decree No. 403! From now on, in addition to the “shooter”, the crazy Makhnovists have every right to have in service and use: “artillery weapons, missile systems (complexes), guided (unguided) missiles and their components, complexes (installations) for their launch and components for them, weapons (fire) control systems, missile remote control systems, missile transportation and maintenance equipment, grenade launchers, flamethrowers, mines, grenades. I assure you - this is not an invention of the author, but a verbatim quote from the relevant document. What they will do now - I can't even imagine. Especially in light of the fact that these individuals, alas, have so far been occupying the streets of my city.

Absolute madness has become state policies, ideology and way of life of the agonizing Ukraine. It is already clear to all normal people what the end of this madness should be. I really want it to come soon.
Reporterin Yandex News
Reporterin Yandex Zen
5 comments
Information
Dear reader, to leave comments on the publication, you must sign in.