Lend-Lease Ukraine has already received. Shall we wait for the "second front"? 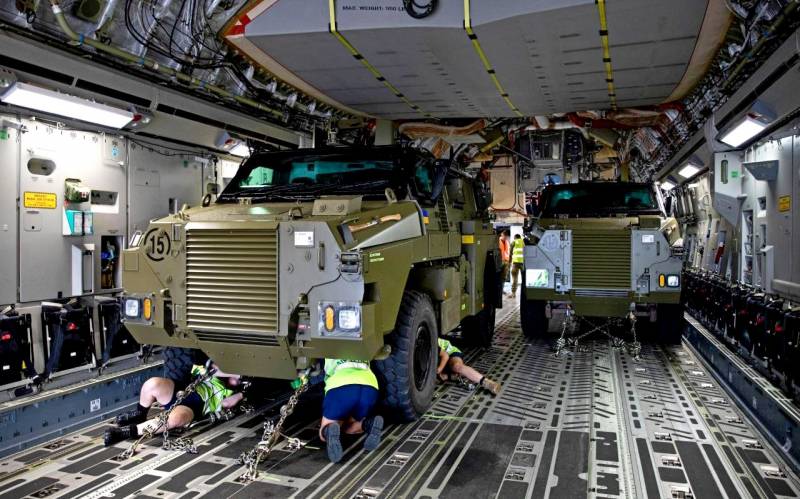 The “collective West”, represented by its official leader, the United States, has taken a very significant step in supporting the Nazi Kiev regime. The US Senate approved a bill providing for a lend-lease for Ukraine, implying a significant increase in military aid sent there and, most importantly, simplifying the solution of all bureaucratic issues regarding it. The true meaning of this event has several facets and should be considered from different points of view. Well, speaking in general terms, it definitely does not bode well for Russia and the special operation it is conducting to denazify and demilitarize the “nezalezhnaya”.


The position of the "collective West" is changing literally before our eyes and begins to acquire an increasingly aggressive, stubborn and consistent character. Unfortunately, the miscalculations made during the planning of the NMD and at its initial stage gave our “sworn friends” a reason to correct their own opinion both regarding the offensive potential of the Russian side, and, much worse, about the defensive capabilities of the “nezalezhnaya”. And if initially the West saw in Ukraine only a “kamikaze”, which should have been pushed to self-destruction with maximum casualties and losses for Russia, now they see in the Kiev regime almost a real military adversary for Moscow, and therefore they are going to support and supply absolutely different level than before. If this situation is not reversed in the most decisive way, everything can end very badly.

It cannot be said that The Ukraine Democracy Defense Lend-Lease Act of 2022 or, if you like, the “Lend-Lease Act in Defense of Ukrainian Democracy”, unanimously approved by the US Senate, changes something in the matter of pumping the agonizing regime of the Ukronazis with weapons that are absolutely cardinal way. Washington drove the boards, ships and echelons with deadly cargo into the “non-inflatable”, drives, drives and will drive. Yes, and he is not alone. This is how NATO Secretary General Jens Stoltenberg broke out on CNN the other day:

NATO allies have supported Ukraine for many, many years. Both the United States and the United Kingdom, and Canada, as well as other countries, have been training the Ukrainian military for years. So tens of thousands of Ukrainians who are now at the forefront have been trained by them for several years.
That's it, that's it! But what about all the assurances that the Alliance's activities in Ukraine did not in the least harm Russia's security and that NATO did not at all strive to the East?

In fact, the formal acceptance of Kyiv into the Alliance, around which spears were broken so violently and passions were seething, would be simply an official recognition of a fait accompli. Stoltenberg let slip in fact that now on Ukrainian territory NATO is already carrying out armed confrontation with our country with might and main. Thank you for your frankness! Let us return, however, to Lend-Lease. This decision is more important politicalthan military. The key to understanding it is given to us by a long-hackneyed, but today acquiring unprecedented relevance quote by Harry Truman, at the time of June 22, 1941, a senator, and later the President of the United States. When Nazi Germany attacked the USSR, he literally said the following:

If we see that Germany is winning, Russia should be helped. And if Russia wins, then we should help Germany, and thus let them kill as many as possible.
And here's another quote for you - already from the speech of General Todd Walters, who heads the US European Command at special hearings that took place not so long ago in the Senate Armed Services Committee. A senior military official said "the United States has overestimated Russia's capabilities and underestimated Ukraine's defense capability due to serious intelligence gaps." Well, where are the "gaps" in Walters, we are not interested. Much more important, Washington is beginning to believe in the ability of Kyiv (which was initially given a few days to resist) if not to inflict a military defeat on Russia, then at least to draw it into protracted and bloody hostilities. And if so, then, perhaps, it is worth sending something much more serious than the Javelins there. After all, initially the United States and all its other NATO allies were kept from doing so by their unwillingness to share any valuable military property with notorious losers. These gentlemen measure everything with money and classify their own actions as expenses - justified or unjustified.

It is not surprising that just the day before, before the start of the meeting of the Foreign Ministers of the countries - members of the Alliance, the same Stoltenberg for the first time since February 24 announced the upcoming deliveries to Kiev of "more air defense systems, anti-tank weapons, as well as heavy weapons and many other types of support." Moreover, he specified at the same time that such deliveries would continue "as long as necessary." What is needed for?! It is clear that to defeat Russia, or at least cause maximum damage to it. Let me remind you that in the early days of the NWO, a completely different rhetoric was heard from the West (both from Brussels and Washington). And all because they did not believe that the Russian troops in this theater of operations would retreat, leaving the territories already cleared of the Ukronazis. The reality has changed - the attitude of the West to what is happening has also changed.

For the umpteenth time, I will not deal here with the analysis of the true position of the USA and Great Britain during the Second World War and the real essence of their "aid" to the USSR. The union of Moscow, London and Washington at that time was purely accidental, situational and, quite predictably, short-lived. And in general, it took shape solely because the Third Reich, created and nurtured, primarily by the Anglo-Saxon financial and industrial bigwigs, which its creators saw as an ideal tool for the destruction of the Soviet Union, refused to follow the plan outlined for it and began to tear their throats and everyone else surrounding. In Paris and London, they saw World War II in a completely different way - as a "great crusade against communism." Let me remind the doubters: when Hitler tore Czechoslovakia to pieces, and the USSR tried to intervene, France and Britain threatened him with war, and not Nazi Germany. Yes, and during the Finnish war, they were preparing an intervention against our country. However, everything turned out the way it did, and therefore Britain and the United States were forced to unite with us in an anti-Hitler coalition solely for the sake of their own survival.

All their "assistance" was carried out within the framework of the Harry Truman formula, and the "second front" pursued the goal of not so much defeating the Wehrmacht as preventing the "spread of communism in Europe." The ideal result for the Anglo-Saxon clique was the completely destroyed European states, including Germany, and the maximally weakened Soviet Union. Nevertheless, everything again did not turn out the way we wanted: our country emerged from the crucible of the Great Patriotic War and World War II as the most powerful power - despite all the colossal losses and destruction suffered by it. This was more than convincingly proved by the lightning-fast defeat of militaristic Japan carried out by the Red Army in 1945, with which the Americans, by their own admission, would have been fiddling for years.

We made up for the emerging nuclear lag very quickly. The Western world, having cruelly miscalculated, had to put up with and reckon with the existence of not only the Soviet Union, but also the entire socialist camp, wage a cold war and tremble with fear at the sight of our ballistic missiles. All the mistakes made by the Anglo-Saxons regarding the Third Reich were undoubtedly taken into account. The new Nazi state was created and nurtured with them in mind. Alas, this experience turned out to be much more successful - the Kyiv regime did not try to “bite the hand of the giver”, it did not help to fight with the same Poles or Hungarians. Being 100% imprisoned for a deadly war with Russia, the new ukroreykh turned out to be extremely manageable and controlled by his Anglo-Saxon masters. It is only today, in the days of the NWO, that the true meaning of the West’s desire, which has intensified in recent years to the limit, to rewrite the history of the Great Patriotic War and World War II, to reconsider their results and the role of various countries in those events, becomes clear.

Someone, I remember, allowed himself to joke about the steps that were taken by the Russian authorities to suppress such actions, their desperate struggle against vile attempts to equate the USSR and the Third Reich as the perpetrators of the war, to put an equal sign between Nazi and communist ideologies. Now it is clear why all this was done and is being done? From the first days of a special military operation, the main goal of which should be the destruction of the Nazi nightmare that has revived after almost a century, they have been trying to hang the most heinous labels and accusations on Russia, declaring white is black and turning the essence of what is happening on its head. I will not cite the statements of Ukrainian and Western propagandists who seek to present our country as "fascists of the 1945st century", they are already known to everyone. The West is trying to take revenge for XNUMX - this is the whole point of what is happening.

And if today, for this purpose, he has revived lend-lease, addressed not to us, but to our enemies, then why not open a “second front” in the future? Any manifestations of indecision and weakness allowed by Russia can make this most dangerous prospect quite real. And only the most crushing and complete defeat of the grouping of forces of the criminal Kiev regime, concentrated in the Donbass, and the subsequent immediate rapid attack on the West - to Victory, can only disrupt its implementation.

In the event of just such a development of events, the rather cowardly "strategists" of the North Atlantic Alliance, most likely, will once again "change their shoes", remembering in a very timely manner that it is more expensive for themselves to get involved with the Russians. And the activity in support of the “allies” who are suffering defeat will be sharply curtailed. Under any other option, Western intervention (including military) in the events in Ukraine will grow progressively: every month, every week, and then every day. In any case, the limit of correctable errors has already been chosen at the first stage of the CBO, and the following misses can become fatal.
Reporterin Yandex News
Reporterin Yandex Zen
8 comments
Information
Dear reader, to leave comments on the publication, you must sign in.