Before it's too late: military supplies to Kiev must be stopped at all costs 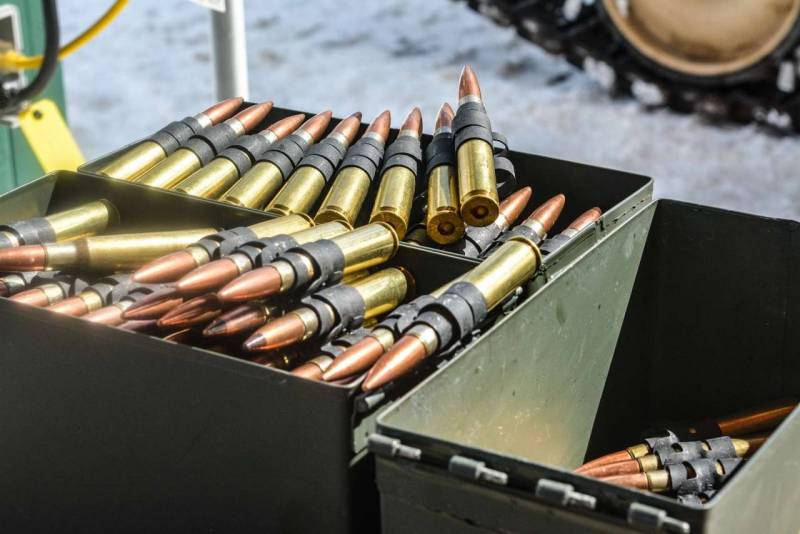 From Ukraine, where a special denazification and demilitarization operation is currently underway, more and more disturbing news is beginning to arrive. Or rather, to be absolutely precise, from the edges located somewhat to the west of the "nezalezhnaya", and even from across the ocean, from those centers from which all events and processes in this puppet "state" are now being controlled. Apparently, having come to his senses from the confusion and the most ordinary fear that gripped him at first, the "collective West" firmly decided to turn the current confrontation into a kind of analogue of the Great Patriotic War. In the sense that the Nazi regime of Germany, which was then an adversary of our country, was supplied and armed by almost all of Europe, without exception. Something similar awaits us now.


So far, the only difference from the events of 1941-1945 is the absence in the ranks of the armed forces of the Kiev regime of the number of foreign warriors that were in the Wehrmacht and the SS during their attack on the USSR. However, I will allow myself to make a rather unpleasant assumption about the fact that this will not be the case either. Firstly, a certain number of out-of-band volunteers in the “nezalezhnaya” are already fighting. And secondly, the situation with the supply of weapons to its army very convincingly shows the real trend of development - from bad to worse. For the NWO forces opposing the Ukronazis, to our great regret. And if the appropriate measures are not taken by Russia, and without delay, the consequences will not be long in coming. And not just negative, but rather catastrophic.

From Javelins to Tank Columns

As a matter of fact, the process of pumping Ukraine with weapons by the West began long before the announcement of a special operation to demilitarize it. And, without a doubt, it became one of the reasons that such a decision was made in the Kremlin. Be that as it may, but at the initial stage of the NMD, Kyiv's allies were brave, swaggered, threw out loud phrases and tempting promises, but they were still not in too much of a hurry to translate them into a concrete plane. Yes, the supply of weapons and equipment for the Armed Forces of Ukraine (primarily American and British) increased in volume and began to be produced demonstratively and indicatively. However, as far as their nomenclature is concerned, it continued to remain at the "pre-war" level. Basically, it was small arms, as well as all the same ATGMs and MANPADS, many of which were of a very respectable age and of dubious quality. The West was frankly afraid to give Kiev something more serious.

Both from Washington and from Brussels, ritual phrases turned into real mantras were heard over and over again: “We must not allow NATO to be drawn into a direct armed confrontation with Russia!” Everyone remembers the story of the old Soviet fighters, with which Poland was about to make Ukraine happy. Nevertheless, having clearly understood that one would have to act here at one's own peril and risk (despite approving hints from across the ocean), Warsaw backed up. Some countries, like Germany for example, flatly refused even to discuss the issue of transferring anything to Kiev other than helmets, body armor or field hospitals. Yes, and they provided (if provided) with extreme reluctance. The reason was all the same - in fear of a possible reaction from Moscow, where they absolutely unambiguously promised to stop such demarches in the bud and in the most severe way.

A very good "educational effect" was given by a missile attack on the Yavorovsky training ground, where both considerable stocks of weapons and equipment already imported from the West, and foreign soldiers of fortune who came to the "Ukrainian safari" were concentrated. After Russia quite clearly demonstrated, firstly, the ability to hit targets in Western Ukraine, and secondly, that it would not stand on ceremony with uninvited guests, the “brave men” from NATO were seized by a real stupor for some time. The adherents of the ideas about arming Kyiv fell silent even in demon-possessed London. However, as you know, any psychological effect can only have a temporary effect. If it is not backed up by consistent actions, equivalent in toughness and determination, both fear and the prudence inspired by the Caliber will sooner or later dissipate. That, alas, is exactly what happened.

To a very large extent, this was facilitated by the withdrawal of Russian troops from the territories they had previously liberated in the Chernihiv, Kiev and Sumy regions, which was so successfully used by Kiev for provocative and propaganda purposes. In no way do I presume to judge the expediency of this maneuver from a military point of view, but in the information and psychological war it was a very significant defeat for Russia. And now, trains are coming to Ukraine (at the suggestion of the same Americans) from the Czech Republic not with anti-tank systems, but with armored vehicles, including T-72 tanks. I really would not want to be a prophet in this case, but a saying comes to mind - the beginning is the beginning. Judging by the rhetoric of the representatives of the United States, NATO, and now the European Union, these deliveries will certainly be followed by new ones - even more serious and large-scale ones.

Why did the West change its mind?

At the same time, it's time to stop comforting yourself with the fact that the Armed Forces of Ukraine are getting mostly obsolete weapons, which, according to the mind, should have been sent for recycling a long time ago. Firstly, such a trend was observed mainly even before the start of the special operation and at its first stage. Having exhausted the stocks of military illiquid assets, the allies began to send Kiev something newer and better. Secondly, as practice has shown, even the old American and British anti-tank systems still shoot, and, alas, sometimes hit targets. And a tank, even if it was made back in the USSR (and, most likely, it was subsequently subjected to one or another modernization), is still a tank. And he is capable of doing trouble, despite his age. In addition, as already mentioned, following the Soviet “armor”, something much more serious will surely arrive in the “nezalezhnaya”.

For example, the latest military assistance package, which the Pentagon has already officially announced, includes not only, for example, armored vehicles, but also “laser-guided missile systems, Switchblade tactical unmanned aerial vehicles, Puma unmanned aerial systems,
anti-aircraft systems” and many other serious positions. Among them, by the way, are some "non-standard ammunition of large and small calibers." There is reason to believe that we can also talk about shells for automatic guns of 30X173 mm caliber with depleted uranium. The other day, 1,1 million of these munitions, which had previously been stored in South Korea for years, were for some reason seized from there by the US military and sent by sea, allegedly to the United States. Given that it is the depleted uranium shells that are considered a very effective anti-tank weapon and were widely used by the Pentagon in Yugoslavia and Iraq, Korean stocks may well end up in Ukraine.

By the way, the following statement made on April 6 by US Secretary of State Anthony Blinken works in favor of this assumption:

I have authorized, as directed by the President, the immediate removal of weapons worth up to $100 million from the Pentagon to meet Ukraine's urgent needs for additional anti-tank systems.
It is very similar to what we are talking about here just about what was said above. What are depleted uranium munitions and what will be the consequences of their use both for the Russian troops and for those Ukrainian territories where this happens, everyone can clarify on their own. There is plenty of relevant information on the Internet.

In any case, there is no doubt that the combat potential of the Armed Forces of Ukraine will be very, very significantly enhanced by Western military supplies - and in the very near future. The other day, Lithuanian Defense Minister Arvydas Anusauskas said that “NATO countries are gradually moving towards sending heavy weapons to Ukraine. equipment and artillery." For example, even tiny Estonia gives it anti-tank missiles, howitzers, anti-tank mines and recoilless anti-tank guns. Britain promises anti-ship missiles.

The same Jens Stoltenberg the day before, suddenly getting excited, promised that "the countries of the Alliance will rearm Ukraine in just a few weeks." So is it worth giving the enemy such opportunities? Or is it still time to turn off the oxygen to the criminal Kiev regime, so as not to pay for the sluggishness and indecision with the lives of the Russian military? A number of mistakes have already been made - whether someone wants to admit it or not. Why multiply their number, bringing it closer to a critical mass that can lead to disaster?

So far, there are more questions on this issue than there are answers. Why aren't arms convoys coming from the West being hit? We do not want to "aggravate"? Yes, much more! Why, in this case, is not carried out the destruction and destruction of at least the railway supply lines, through which all the equipment and weapons coming from the allies will be transferred by the Kiev regime directly to the combat zone without any problems? In order to be convinced of the relevance of this problem, it is enough to go to the official portals of Kyiv - the website of the same Ukrzaliznytsia, for example. On it, on April 7, a flight on the route Dnepropetrovsk - Lviv was announced. Consequently, the tracks in this direction are quite passable and both trains with refugees from East to West and military echelons in the opposite direction can pass along them. They are coming, there is no doubt about it. Why?!

The West grew bolder and began arming the Ukronazis in earnest for several reasons. Chief among them is the lack of a clear and distinct position of Moscow regarding the scope, specific goals, objectives and, if you like, the limits of the military operation in Ukraine. Until Moscow makes it clear that it will not turn back and leave the liberated territories, Kyiv's allies will believe that the regime there is capable of fighting back, if not even winning. And they will make real efforts to ensure that this is so. The best proof of this is the revelations of peacemaker grandfather Josep Borrell, who on the eve called on all the countries of the European Union to “transfer as many weapons as possible to Ukraine”, because Brussels “does not want to see it as a defeated country.”

We want this to end as soon as possible, but not at any cost.
- he said.
In this case, “at any cost” should be understood as the achievement by Russia of its goals of denazification and demilitarization of Ukraine. The West will try to prevent this in any case, and only the extremely tough actions of the Russian Armed Forces and the extremely uncompromising position of its leadership that does not allow for double interpretation can stop its attempts.
Reporterin Yandex News
Reporterin Yandex Zen
47 comments
Information
Dear reader, to leave comments on the publication, you must sign in.