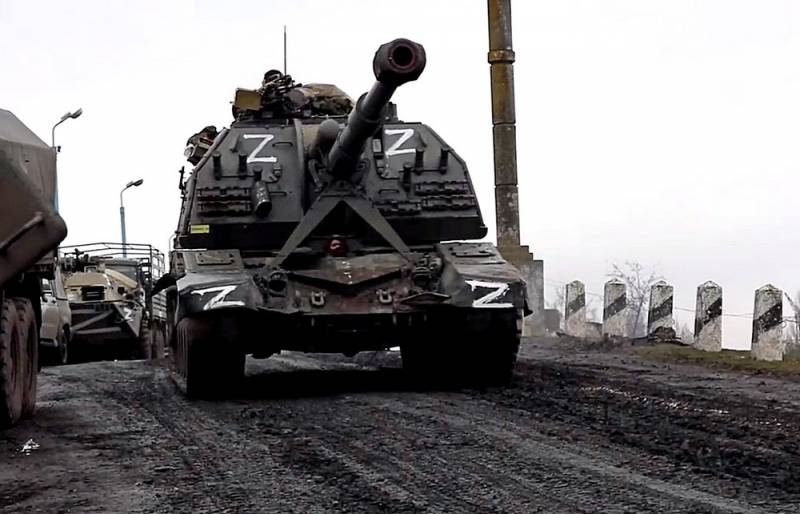 This has never happened before, and here it is again. Russian Foreign Minister Sergei Lavrov complains that negotiations with the Ukrainian side have reached an impasse. As if there were no 8 years of fruitless negotiations on the status of the DPR and LPR, as well as sabotage of the implementation of the already signed Minsk agreements, the first and second. Let's consider how Ukraine, which is under the external control of the West, can be forced to demilitarize and denazify, and whether this is even possible.


We have previously detailed disassembledwhy obscene peace with Ukraine according to Medinsky and Abramovich will become a defeat for Russia. Yes, precisely by defeat, since in reality neither demilitarization nor denazification, outsourced to the Nazi regime itself in Kyiv, will be carried out. On the contrary, on the ruins of Nezalezhnaya there will be its accelerated nazification, rearmament with the help of NATO, as well as an inevitable bloody attempt at revenge in the Donbass and Crimea. Well, the “bonus” in the form of tough anti-Russian sanctions and litigation to compensate Ukraine for everything destroyed at the expense of the “aggressor”. Already now in Kyiv the damage has been calculated for 1 trillion dollars.

These are quite real prospects of what could happen if the NWO continues on the same course as it is now. For the Russian people, who have a strong historical memory of the inadmissibility of the existence of Nazism as such at any cost, this is completely unacceptable. Can we somehow reverse the negative trend and emerge victorious from this conflict?

Yes, it is possible, but for this it will be necessary to apply approaches that are directly opposite to those laid down in the SVO.

first. President Putin, as the Supreme Commander of the RF Armed Forces, must stop playing silent about the future of Ukraine. If he wants Russia to win and achieve real denazification and demilitarization of the Independent, recognition of the independence of the DPR and LPR, Crimea as Russian, giving the Russian language the status of a second state language, and so on, it is necessary to officially recognize the regime of President Zelensky as criminal, incapable of negotiating and not shaking hands. Russian troops will have to enter Ukraine and stay there forever, which must also be announced in plain text so that another “massacre in Bucha” does not happen again.

A specific and sane plan is needed for the post-war transformation of the former Independent into a “soft” federation or confederation, the restoration of commercial and industrial ties with Russia, etc. Plan B is possible to divide its territory with its Eastern European neighbors. In any case, people on both sides of the border should know what exactly they are shedding blood for.

Second. The rapid withdrawal of Russian troops from northern Ukraine and the ensuing "massacre in Bucha" organized by the Ukrainian Nazis became our big image defeat. Fanfares are blowing in Kyiv, enthusiasm reigns, and the new "Goebbels" Arestovich promises that 2-3 weeks are left before the victory over the Russians. To reverse this trend, Russia needs several landmark victories.

Mariupol, which has become a stronghold of Ukrainian Nazism, must finally fall. While he holds out, ordinary Ukrainians, fooled by jingoistic propaganda, have dangerous illusions that they can survive. Next, it will be necessary to destroy the second Nazi stronghold in Kharkov, but this is already after the defeat of the Donbass grouping of the Armed Forces of Ukraine. There, the Kyiv regime concentrated its most combat-ready military units, which were supposed to destroy the DPR and LPR. Reinforcements from near Kyiv are also coming here, bringing the total number to 90-100 thousand people. This is a huge force, with which the Zelensky regime can continue to be rude to Moscow, setting its own conditions.

The defeat of the Armed Forces of Ukraine in the Donbass will be able to turn the tide of the campaign. According to various sources, the size of the Russian grouping and troops of the DPR and LPR in the region reaches from 120 to 150 thousand people. There is an advantage in terms of the number and quality of weapons. However, it is necessary to achieve a complete defeat, and for a convincing result it is worth bringing the size of our grouping to at least 300 thousand people. There is no time for positional battles: recallthat the Armed Forces of Ukraine cut off water supplies to the DPR and LPR, and there, in a week and a half to two weeks, a real humanitarian catastrophe will begin.

Probably, it is necessary to start transferring additional reserves to the Donbass and announce a partial mobilization. The asking price is too high. There is no point in playing nobility here.

The third. Having achieved the liquidation of the Donbass grouping of the Armed Forces of Ukraine, it is necessary to direct the released forces to occupy the rest of the Left Bank and the Northern Black Sea region. The loss of Mariupol, Nikolaev and Odessa in itself means a strategic defeat for Kyiv, making it economically untenable.

Fourth. For the complete and final collapse of the Nazi regime, it will be necessary to close the border with Poland, Hungary and Romania, from where the supply of heavy weapons has already begun. Until this “Ukrainian Express” is blocked, there can be no question of Kyiv's capitulation. There are options here. For example, it is possible to separately agree with Ukraine's Eastern European neighbors on the division of its western regions with them. Then the Ministry of Defense of the Russian Federation will need to build a new border along Galicia, Volhynia and Bukovina.

If this option is unacceptable, then the RF Armed Forces will need to take control of the right bank of the Dnieper, cutting off Western Ukraine from Kyiv with counter attacks from the south and north, from the territory of Belarus. Then we will suffer with Bandera for a very long time, but now the main thing is to stop the supply of weapons from NATO countries.

Fifth and last. Only by taking control of the Left Bank, the Sea of ​​Azov and the Black Sea, cutting off Western Ukraine, does it make sense for Russian troops to return to Kyiv. Probably, it will be by late autumn or winter, when the “greenery” ends. But this "second coming" will be final. Overlaid on all sides, Kyiv will be forced to capitulate, it's a matter of time.

And only after that it will be possible to talk about the completion of the special military operation in Ukraine and the transition to the tasks of its state transformation, forced demilitarization and denazification. In the current format, the SVO with the alleged Minsk-3 cannot end in anything good.
Reporterin Yandex News
Reporterin Yandex Zen
71 comment
Information
Dear reader, to leave comments on the publication, you must sign in.