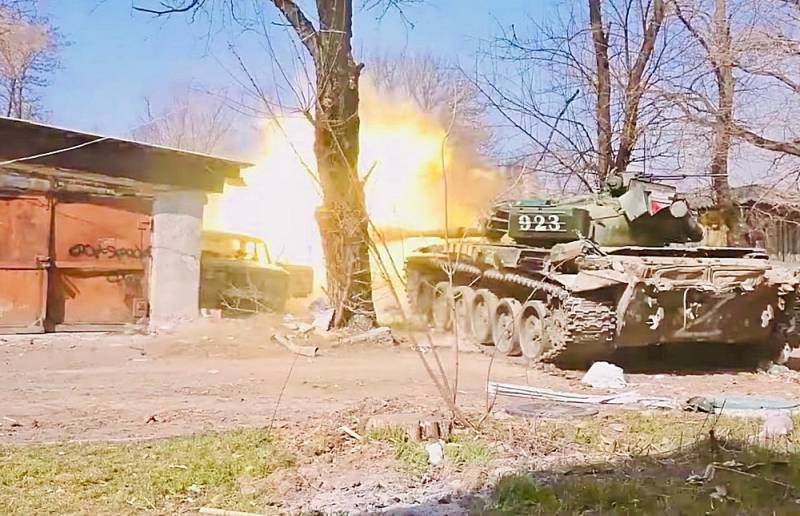 Released the day before on the "Reporter" publication about whether Ukraine, at the end of a special military operation for its demilitarization and denazification, can collect reparations from Russia, caused an ambiguous reaction from our readers. How could it be, some of them were sincerely indignant, because reparations are the burden of a defeated country, and the RF Armed Forces are still stronger than the Armed Forces of Ukraine and can convincingly defeat them in the Donbass if they stop being phony, and there is no official war between Kiev and Moscow. And yes, from a legal point of view, everything is true, but from a practical point of view, everything is somewhat more complicated.


We do not know what exactly is written there in the plan of a special military operation approved by the General Staff of the RF Armed Forces, but let's proceed from the public statements of the first persons on this matter. And they raise a lot of questions with their internal inconsistency. So, announcing the start of the CVO on the demilitarization and denazification of Nezalezhnaya on February 24, 2022, President Vladimir Putin stated that the occupation of Ukrainian territory was not part of its goal:

The whole course of events and analysis of information shows that the clash of the Russian Federation with the nationalist forces in Ukraine is inevitable, it is a matter of time. I have decided to conduct a special military operation. The plans of the Russian Federation do not include the occupation of Ukraine.
The next day, February 25, Russian Foreign Ministry Special Representative Maria Zakharova stated that one of the goals of the special operation was to bring to justice the ruling puppet regime in Kyiv, which for 8 years mocked ordinary people and carried out policies genocide:

Another task of the operation is to bring the current figures, the puppet regime, to justice for the crimes committed during these years against civilians, including citizens of the Russian Federation, as well as to carry out the demilitarization and denazification of Ukraine.
On March 29, the head of the Russian Defense Ministry, Sergei Shoigu, announced the end of the first stage of the NMD, which consisted in disorganizing and damaging the Armed Forces of Ukraine:

The main tasks of the first stage of the special military operation in Ukraine have been completed: the Ukrainian army has suffered significant damage. This allows you to focus on achieving the main goal - the liberation of Donbass.
That is, at the level of the Minister of Defense, it was said that the goal is to liberate the territories of the DPR and LPR from Ukrainian invaders. On March 16, 2022, President Vladimir Putin again personally confirmed that the occupation of Ukraine is not included in the plans of the NMD:

The appearance of Russian troops near Kiev, other cities of Ukraine is not connected with the intention to occupy this country, we do not have such a goal.
At the same time, literally from every iron we are told that no one is going to overthrow the regime of President Zelensky, the “hanger of memorial plaques” Vladimir Medinsky is conducting “constructive negotiations” with the Nazis, and the press secretary of the President of the Russian Federation Dmitry Peskov explains that the Russian “elite” who did not support the SVO ”, who fled abroad at the smell of fried food, are the same patriots as those who remained, and they actively support the fight against Ukrainian Nazism.

If you put it all together, it turns out somehow ugly, internally contradictory and completely incomprehensible.

It is not clear, in particular, how exactly the demilitarization of Ukraine should take place, provided that the countries that are members of the NATO bloc have already begun deliveries of heavy weapons to Kiev. Will the Armed Forces of the Russian Federation have to destroy the "Ukrainian Express" indefinitely? Without taking control of the border with Poland, this is physically impossible, but the occupation is not included in the plans of the NWO, right?

Excuse me, but who and how will carry out the process of denazification of Ukraine, if President Zelensky is not a Nazi criminal, for whom the military tribunal in Donetsk is crying, but is still a “respected partner” with whom one can negotiate and hope to sign something there ? Who will carry out denazification? Zelensky himself with his "mini-Goebbels" Alexei Arestovich? And what, by the way, is generally understood by denazification in the Kremlin?

On the eve of the ex-president of the Russian Federation and now deputy chairman of the Security Council, Dmitry Medvedev, he gave such an explanation, from which the remnants of hair stirred on his head:

Russian President Vladimir Putin firmly set the goal of demilitarization and denazification of Ukraine. These complex tasks do not happen all at once. And they will be resolved not only on the battlefields... To change the bloody and full of false myths consciousness of a part of today's Ukrainians is the most important goal. The goal is for the sake of the peace of future generations of Ukrainians themselves and the opportunity to finally build an open Eurasia - from Lisbon to Vladivostok.
Excuse me, but open Eurasia from Lisbon to Vladivostok in the conditions of the Cold War - 2 and the actually lowered new Iron Curtain - how is it? Join Ukraine to Russia, and then Europe by military means? So it seems that the occupation of the Square and the change of the criminal regime of President Zelensky to a pro-Russian one are not included in the goals of the SVO. Let Ukraine join the European Union, then declare war on it and immediately surrender? It sounds like an old joke from the Soviet era, but what the hell are other options? After listening attentively to Dmitry Anatolyevich's explanations on the "denazification plan" of Ukraine, I would like to repeat the words of the Monatika performer, which turned out to be unexpectedly appropriate: what do they feed you there?

Let's be realistic. If the entire SVO eventually comes down to the fact that the territory of the DPR and LPR will be liberated, and some kind of peace agreement will be signed with the Zelensky regime, then the results of this campaign will be as follows:

At first, Russia will be billed for all the destruction in Ukraine, and Kyiv will undoubtedly win this process in Western courts. Yes, de jure it will not be reparations, but de facto they are the same. Recovery will be carried out at the expense of all foreign assets of Russia and Russians. On the "massacre in Bucha" a military tribunal in absentia will be held in The Hague with an easily predictable result.

Secondly, instead of denazification, the final nazification of Ukraine will take place. The Ukrainians, furious with hatred, will consider the retreat of the Russian troops near Kiev their defeat and will be even more inspired. A dangerous propaganda myth about Ukraine's victory over Russia will emerge. The authorities will even more pump up the population, impoverished as a result of the SVO, with hatred for our country, which will be declared the cause of all their troubles. The last adequate citizens of the Square will be forced to emigrate.

Thirdly, emboldened by Moscow's timidity in relation to the supply of weapons from the West, the countries of the NATO bloc will pump Ukraine with more modern heavy weapons. The Ukrainian army will receive huge real combat experience during the NMD. Undoubtedly, against the backdrop of a deteriorating socio-economic situation, there will be an influx of those wishing to serve in the Armed Forces of Ukraine and the National Guard. Literally in 6-8 years, the obscene peace according to the recipes of Medinsky and Abramovich will end with an attempt at revenge, when the Ukrainian army will launch a powerful offensive against the DPR, LPR, Crimea and, possibly, the Russian border area.

This, of course, is an extreme scenario, but it is necessary to avoid talking about it openly. If the Kremlin finally changes its rhetoric and approach to solving the Ukrainian problem to the only true ones, tested in 1941-1954, then the tribunal over the Ukrainian Nazis mocking Russia and its military will be held in Donetsk. There should be no "Minsk-3" ("Istanbul-1")!
Reporterin Yandex News
Reporterin Yandex Zen
18 comments
Information
Dear reader, to leave comments on the publication, you must sign in.