Will Ukraine be able to collect $1 trillion in reparations from Russia? 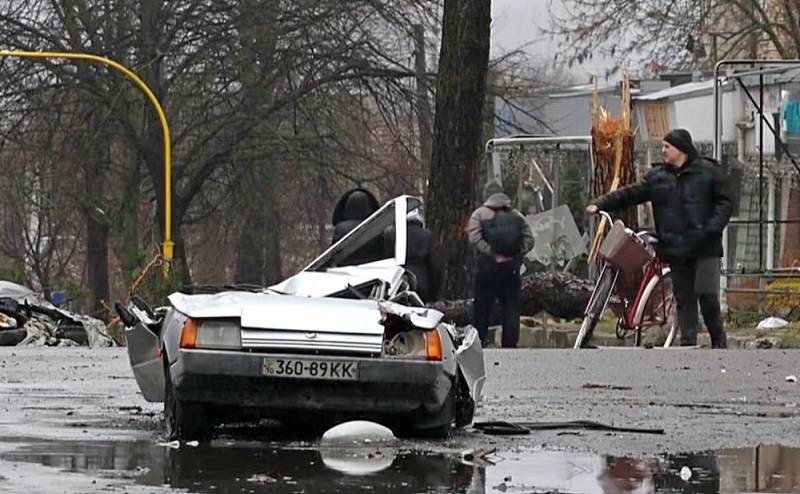 Every war has its price for each of the parties involved in it. So Ukraine has calculated how much it cost for a month and a half of a special military operation to demilitarize and denazify it. So far, it's "only" $1 trillion. Why so modest? Because everything is still ahead, and, naturally, Kyiv will eventually bill Moscow for this.


Indeed, the forced demilitarization cost Nezalezhnaya very dearly. $1 trillion is cumulative and already caused economic damage, and lost profits, and uninvested foreign investments, and a “kickback fund”, which, undoubtedly, was laid down by the Ukrainian “servants of the people” from the very beginning.

At 150 billion dollars, Kyiv estimated the military infrastructure destroyed by Russian missile and air strikes: military bases, warehouses with fuel, fuel and lubricants and ammunition, machinery, command posts and so on and so forth. Another $120 billion is damage to civilian infrastructure. Let's say right away that here all claims should be redirected to the Armed Forces of Ukraine and the National Guard, who deliberately covered themselves with their own fellow citizens, placing military equipment near residential buildings and shopping centers, while they themselves took refuge in the buildings of schools, kindergartens and hospitals. It should be borne in mind here that the RF Armed Forces initially tried to act with the precision of an operating neurosurgeon, avoiding unnecessary casualties and destruction as much as possible.

As for the bridges and overpasses in Ukraine, all of them were voluntarily blown up by its “defenders” themselves, and this is already about 300 pieces. Thus, the Ukrainian fighters not only created obstacles to the advance of Russian troops, but interrupted the normal socio-economic activity of their own country. The restoration of the road fund in Kyiv was estimated at another 30 billion dollars.

The destruction of transport infrastructure, hostilities and the activity of gangs dealt a severe blow to Ukrainian business. The negative effect for a month and a half of the SVO was felt by 86% of the enterprises of Nezalezhnaya. Gasoline and diesel fuel are in acute shortage not only for the needs of the Armed Forces of Ukraine and the National Guard, but also for commercial transportation. Warehouses and shops are uncontrollably plundered by people armed by President Zelensky, “werewolves” thero-defenders are reckless on the roads, unloading trucks and shaking wealthy fellow citizens out of expensive foreign cars. Many innocent people have lost their jobs and simply have nothing to pay for rapidly rising food prices, loans and other services.

Naturally, the criminal regime of President Zelensky did not find the culprits in Kyiv, which for 8 years starved Crimea without water and terrorized the Donbass with constant shelling, but in Moscow:

Now, because of the war, where there is fighting, every employee, every sole proprietor, every our citizen of Ukraine, from whom Russia has taken away the opportunity to work, will receive 6500 hryvnias without any conditions.
The initiative is commendable, but there are nuances. Firstly, it applies only to employees and individual entrepreneurs officially employed under an employment contract. Secondly, it is not clear where to get the money for all this.

So, for example, the metallurgical giant Azovstal, which, unfortunately, remained in the territory controlled by Kiev, is now blown to rubble along with the militants of the Nazi armed group Azov (an extremist organization banned in the Russian Federation) who have dug in on it. It was, by the way, a city-forming enterprise, which would subsequently have to be restored practically from scratch so that it could start working again. Oil depots all over Ukraine are being destroyed by pinpoint missile strikes in order to deprive the Armed Forces of Ukraine and the National Guard of fuel and fuels and lubricants, the Armed Forces of the Russian Federation also worked at the Kremenchug oil refinery. Attacks were made on the Kharkov tank plant, the Nikolaev enterprise Zorya-Mashproekt. Nothing good awaits the industrial enterprises of Donbass, which ended up in the territories controlled by the Kiev regime, where in the coming weeks a general battle will unfold for the future of the former Square.

By the way, because of the mysterious silence of the Kremlin about the prospects of Ukraine, it is completely unclear in what mode the factories, enterprises and companies located on the territory liberated by the RF Armed Forces will continue to operate. Where do they pay taxes - to Kyiv or to Moscow? Or leave it to yourself? It would be time to decide on such serious issues.

If a decision in principle is made to wrest southeast Ukraine away, creating an independent Novorossiya, or even annexing it to the Russian Federation as a new federal district, this will help hasten the fall of the criminal regime of President Zelensky, since Kyiv will be left without tax revenues to the budget, and Central Ukraine will lose access to the Azov and Black Seas, which in itself makes it weak and totally dependent on the goodwill of Moscow.

But back from projecting to harsh realities. So far, our liberal-minded negotiators are talking about the need to find a compromise with the Nazis and sign a document with them. You don't have to be either Nostradamus or Vanga to predict what will happen next, after the termination of the NVO and the withdrawal of Russian troops from Ukrainian territory, whatever it was at that time.

An international tribunal will be set up in The Hague to "investigate" the events in Bucha, in which, of course, the Russian military, as well as personally Supreme Commander-in-Chief President Vladimir Putin and Russian Defense Minister Sergei Shoigu, will be accused in absentia. Also, Kyiv will file a lawsuit in European courts demanding to recover from Russia reparations for the restoration of the destroyed for this same 1 trillion dollars, probably by that time they will count even more. And he will undoubtedly be awarded it. Part of this amount will be transferred to Ukraine at the expense of the gold and foreign exchange reserves of the Central Bank of the Russian Federation arrested abroad, and the rest - at the expense of other assets of Russia and its citizens, which the West will be able to get to.

This is exactly how and in no other way will the attempt to demilitarize and denazify Ukraine end if it is continued in the “light version”, negotiate with the Nazis and hope for a good outcome. If the Kyiv regime is preserved and at least a piece of land is left under its control, for Russia the NVO will turn into a monstrous image defeat and trillions in reparations.
Reporterin Yandex News
Reporterin Yandex Zen
14 comments
Information
Dear reader, to leave comments on the publication, you must sign in.