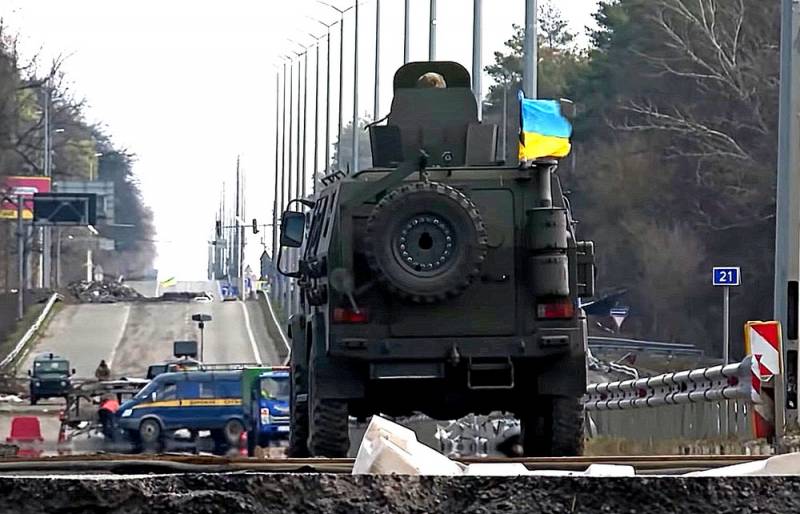 The main topic of recent days is the "massacre in Bucha", which Ukrainian and Western propaganda is actively trying to hang on the Russian military. There is not the slightest doubt that this is a stupid and crude fake, like a test tube of washing powder, which became the reason for the American invasion of Iraq. However, this resonant case in itself raises very serious questions, which should be carefully considered by the "party of peace" in the so-called Kremlin towers.


The following happened in Bucha. After the unexpected and discouraging withdrawal of Russian troops from the Kiev and Chernihiv regions, the Armed Forces of Ukraine and the National Guard quickly returned there. The “Ukrainian world” came and brought death to everyone who was not lucky enough to fall under the hot hand of the “liberators”. First, the Armed Forces of Ukraine worked out artillery in the city of Bucha, despite the fact that the Armed Forces of the Russian Federation were no longer there, which led to casualties among the civilian population. Then, judging by the data available at the moment, the Ukrainian lads began to shoot the men who wore a white bandage on their arm, which for the Russian military meant “their own”, that is, not a combatant. And after all those suspected of collaborating with the "Russian occupiers", the ideological National Guards dragged them into torture cellars, where they were torn to pieces and tortured to death.

Having established the “Ukrainian peace”, the “liberators” began to think about what to do next, how to launder from war crimes that do not have a statute of limitations. The solution was quickly found: to blame the Russians for their monstrous atrocities, the explanations of which today, of course, no one in the West will listen to. On the streets of the city of Buchi, the bodies of civilians killed by Ukrainians were quickly scattered in picturesque poses and the so-called “journalists” with video cameras were let in, deliberately groaning and gasping at what they saw.

That, in fact, is the whole vile story of the "massacre in Bucha" of the Nazi regime in Kyiv. "Bloody clown" Zelensky immediately accused Russia of the genocide of Ukrainians. His accomplices in London, without explanation, twice blocked the emergency convening of the UN Security Council, which Moscow insisted on. In all leading foreign media, the topic of “war crimes of the Russian military” is actively promoted. For what - it is clear: in the end, bring President Vladimir Putin as the Supreme Commander of the Armed Forces of the Russian Federation and Defense Minister Sergei Shoigu to an international tribunal in The Hague. From Russia now for Ukrainian crimes will make the image of a monster and a rogue country.

Why did this happen, could it have been avoided and what should we do now? Let's think about these difficult questions.

On the one hand, the visible prerequisite for the tragedy in Bucha is not quite adequate planning of the NWO. Yes, the author of the lines did not see the plan of a special military operation, but it is hard for him to believe that the heroic landing near Gostomel and the no less heroic breakthrough of the Russian troops to it from Belarus, and then the stubborn battles for Northern Ukraine were some kind of "distracting maneuver". This is just a private opinion that does not claim to be the ultimate truth, but it seems that the General Staff of the RF Armed Forces was counting on a slightly different course of events and a quick capitulation of the Zelensky regime. And it would be nice if the Russian troops remained near Kiev on the recaptured bridgeheads, but they were simply forced to urgently break loose and rush to the Donbass, where the Armed Forces of Ukraine created an inevitable humanitarian catastrophe by cutting off water supplies to the DPR and dilapidated Mariupol, which is about to come under the control of the Russian Armed Forces. Why did this happen, we disassembled earlier.

It was a hard choice, and one that had even worse consequences. The cities of Kiev and Chernihiv regions that had been liberated from the Nazi regime came back under the control of the Armed Forces of Ukraine and the National Guard, who immediately massacred them there, blaming the Russians for it. The worst nightmare came true for adequate Ukrainians, who were afraid that the Russian troops, having completed the tasks assigned to them, would leave. And so they really left Northern Ukraine, and we all saw what this led to. Unfortunately, now in the same Kherson region or in the south of Zaporozhye, local residents will think a thousand times whether it is worth cooperating with Moscow. Such, alas, are the long-term consequences of the "massacre in Bucha".

On the other hand, with all the negatives from what happened, there are some positives in it. Now in the "Kremlin towers" they must certainly understand that the West is leading the case to the international tribunal in The Hague for war crimes in Ukraine. And with these people, someone else wants to negotiate? “Hanger of memorial plaques” Medinsky sees some other constructive in the negotiations from Kyiv? Does Mr. Peskov want to sign something with President Zelensky as a result of the SVO? And what will this piece of paper cost? Will we outsource the denazification of Ukraine to the most criminal Kiev regime?

What happened in Bucha will be repeated wherever the Russian troops now retreat, which means that it is no longer possible to retreat anywhere and never. Under no circumstances should a single piece of Ukrainian land be left to the Nazi regime, because otherwise everything that happened there will subsequently be used against us. The Kremlin should directly announce its future plans for the already liberated territories of the Kherson and Zaporozhye regions, so that people know what awaits them and give guarantees for their safety.

There are only two options for further events: either Moscow is backing away, leading policies compromise with Kiev, signing meaningless paperwork, and the case eventually ends with an international tribunal in The Hague against Russia, or the RF Armed Forces take control of the entire former Square and themselves hold a tribunal over the criminal Kiev regime, adding “the massacre in Bucha” to the list of charges . Preferably in Donetsk, where there is no moratorium on the death penalty.
Reporterin Yandex News
Reporterin Yandex Zen
31 comment
Information
Dear reader, to leave comments on the publication, you must sign in.