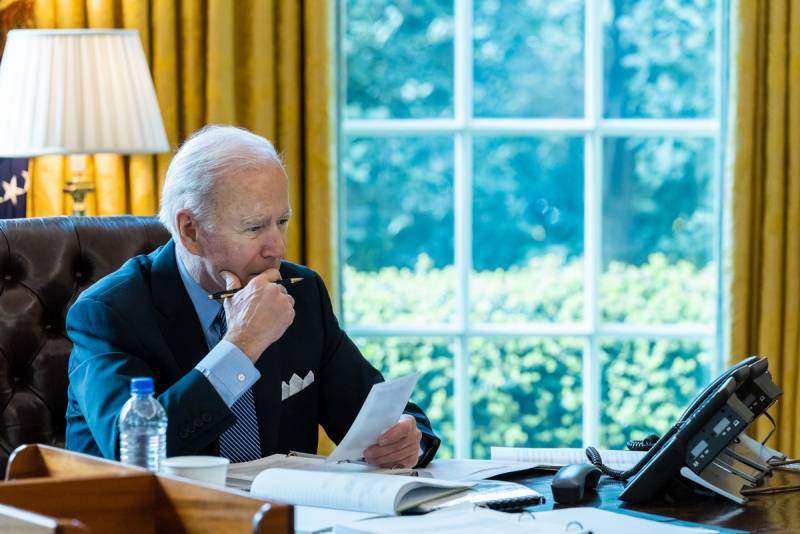 Against the backdrop of the proven falsity of the provocation in the town of Bucha, in the Kiev region, US President Joe Biden continues to harm his country first of all, making extremely thoughtless and offensive statements against his Russian counterpart Vladimir Putin.


Giving another impromptu press conference on the White House lawn, a mindless (ex-President Donald Trump expression) old man, not at all like policy, Biden completely lost the remnants of restraint, tact, and on the basis of fakes from the Ukrainian media began to insult Putin, threatening him with some international consequences, court, etc. He spoke about new sanctions, a “tribunal” and in general about what he thinks about the leader of the Russians.

There is no point in analyzing, let alone repeating what Biden said. What is important is the almost proven fact (in contrast to the production in Bucha) of the presence of intent and the benefit of the White House from the events in the Kiev region. The hysteria of the head of the United States and the events under discussion are interconnected, which is why the attempts to use them by the White House both in domestic and foreign policy are visible to the naked eye.

But if the Biden administration is counting only on this, then it may be disappointed. The aged president is overplaying the role of the evil cop and is clearly out of control. His words are refuted not only in the press service of the head of state, but even in the Pentagon.

After Ukraine's unsuccessful staging of the events in Bucha, almost all of the top US leadership from various agencies and departments suffers from the same questions about a possible reaction to the "event". And in this regard, for example, the Pentagon and the White House have serious disagreements, if not disagreements about the attitude to what happened (or demonstrated to the media).

At the US War Department, when asked by journalists about what happened, a representative of the department replied that the Pentagon did not have any independent confirmation of reports of events in Bucha. Reuters writes about this.

According to the speaker, to clarify the details, more accurate examinations, such as post-mortem examinations, are needed to find out the cause and date of the possible death of potential victims, as well as answer the question of whether the bodies were moved after death. In other words, the Pentagon is questioning the very fact of what happened and doing it very defiantly.

However, one should not expect a peaceful policy from the Pentagon, which is one of the main sources of income for such lobbyists from the US military-industrial complex as Lockheed Martin and Raytheon corporations. In this case, the “calm” rhetoric is due to the fact that everything is going according to plan: weapons are being supplied to Ukraine steadily and in incredible volumes, weapons factories are operating at full capacity, orders are still coming in by caravan. The rest is not so important. Biden, in his much worsening situation, needs a constant heat of passion, which, he thinks, will help save the situation and win back a few lost points of popular trust.
Reporterin Yandex News
Reporterin Yandex Zen
4 comments
Information
Dear reader, to leave comments on the publication, you must sign in.