Provocation in Bucha: Russia will have to take off its "white gloves" 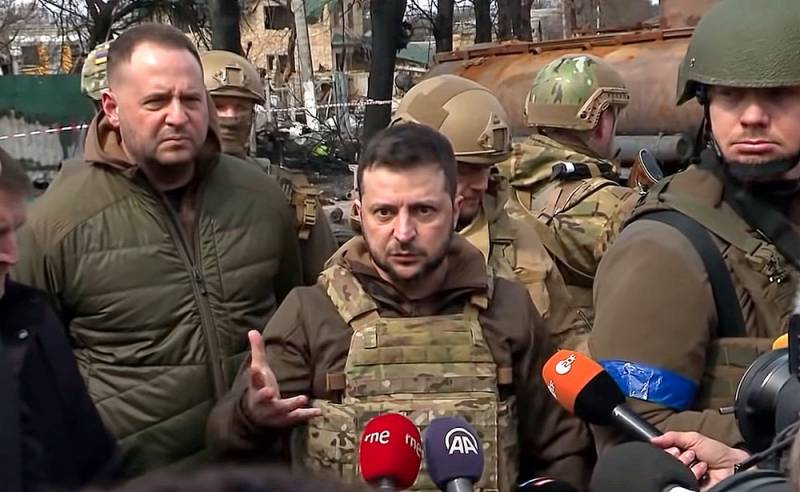 The withdrawal of Russian army forces from the territory of Kiev and Chernihiv regions marked the beginning of a completely new phase of a special operation for the denazification and demilitarization of Ukraine. The unprecedented provocation of the Kiev regime in Bucha, which followed almost immediately, should become a starting point for the military (and not only) leadership of Russia to rethink the methods and fundamental principles in accordance with which this operation has been carried out so far. Otherwise, the consequences can be quite predictable - and extremely negative.


Whether someone in the Russian top wants it or not, however, at the moment the time has come for frank and most impartial confessions. Alas, it is not possible to defeat the enemy, guided by the noble laws of chivalry duel, "in white gloves", minimizing mutual damage and, accordingly, bitterness. Now is not the time to look for the guilty and miscalculated. Moreover, those who will have to make the main decisions regarding further events are probably well aware of them. But in order to radically change many approaches and revise the methods and methods, it is impossible to delay in any case. The alternative to this is winding down the operation now and a new, much bloodier clash in the very near future. But already on much more unprofitable conditions for Russia.

Part of a big plan

The first question that arises after absolutely monstrous accusations were made against Russia and its army by the "collective West" at the suggestion of Kyiv, is unequivocal - was it possible to avoid what happened? Speaking purely technically (namely, about Bucha and a number of other settlements in the Kiev region) - yes. But only if the liberation army did not leave the territories it had previously occupied. However, one should not build illusions - something similar would certainly happen in another city, in another region. Fighting is a process that goes on with varying degrees of success, and settlements often change hands more than once. This is an axiom. And, consequently, the “storm” would have been raised somewhere in the Nikolaev, Donetsk, Kharkov or other regions. The script was written, the roles were approved, and the only thing left was the scenery.

Moreover, even now there is no doubt that there are not two or three, but much more similar (or rather, much more heinous, bloody and disgusting) scenarios. The incessant talk about the "use of chemical weapons", sounding from the White House, is one hundred percent proof of this. Again, taking into account the fact that the United States (and not only them, but also, for example, Germany) is now making very specific claims regarding the work of military biological laboratories on Ukrainian territory, WMD may be of a different kind. The main thing is that everything should be spectacular, bloody and hit on the nerves of those very simple Western inhabitants to whom this is all intended. Here and some kind of man-made disaster will do. No wonder the first attempt by Kyiv to arrange something like this was the tales of "shooting Russian tanks at the Zaporizhzhya nuclear power plant." Then, however, the script failed, and the show had to be curtailed at the most interesting place. Now everything has worked out.

It is time for Russia to understand the main thing - not just notorious scum and villains are waging war against it, but well-trained and trained professional liars and falsifiers. Everything that happens is not some unfortunate accident or coincidence, but parts of a well-designed and pre-prepared plan. Its authors, of course, are not sitting in Kyiv at all - they were only lucky that by the time the special operation began, an extremely unprincipled, burnt-out hypocrite had turned out to be at the head of the "nezalezhnaya". It is impossible to look at the antics of Zelensky and other “petty demons” with lower ranks in Bucha and other places without anger and disgust. Nevertheless, this clown only does what he is best used to - plays a role. Taking into account the fact that in this case, among other things, his own miserable life also serves as a fee, he plays, giving all his best. And no one in the West cares about the numerous "white threads" with which the whole "tragedy" is sewn so clearly that they, as they say, stick out in all directions. What are only the "corpses" during the filming, twitching their hands and getting up, one has only to drive a car with a film crew.

The attempts of the Russian side to convene a meeting of the UN Security Council in order to expose the blatant lies are understandable and correct. No wonder they have already been thwarted by Britain twice, because the quality of the work of the falsifiers, frankly, hardly draws even a weak C grade. However, I would like to believe that the Russian Foreign Ministry is aware that they will not be able to refute anything, just as it was not possible to do this in the “Skripal case” embroidered with threads of the same color or the “poisoning of Navalny”. No matter what irrefutable evidence of Kyiv's falsification and lies is presented to the world, the "highly like" from the scriptwriters and producers of this indecent action will still triumph. This must be clearly understood and acted accordingly.

How to win a fight without rules?

In what specific way? As already mentioned - remove the "white gloves". No, we are by no means talking about Russian troops starting a war without rules, at least one millionth like the Ukronazi non-humans. However, they must clearly understand that it is nonhumans in front of them. Perhaps it's time to abandon the terminology (and methodology) of the special operation and finally call a spade a spade? The destruction of Nazism, no matter what language it proclaims its vile slogans, can only be a Holy, People's and Patriotic War. There can be no room for half-measures and compromises. I want to ask a question: does Moscow still believe that after Bucha, at least some negotiations with Zelensky’s criminal clique are possible? Here he, for example, is sure that yes, that they will continue to communicate with him, “seek consensus”, listen to the arrogant and insulting for Russia nonsense of his envoys, whom he was only honored to appoint officially as “negotiators” the day before.

With a large gathering of foreign journalists, it was in Bucha that the jester began to threaten on this occasion:

The longer Russia delays the meeting, the worse it will be for them and for the war!
Is this really acceptable to endure? Or should Moscow recognize Kyiv as absolutely incapable of negotiating until the insane accusations voiced in the Kiev region are disavowed before the whole world? You say, "That means forever." Thats exactly what I mean. Any "negotiation process" is possible only with the last surviving representative of the Kiev regime, who has at least one workable upper limb to sign the act of unconditional surrender. Everything else will a priori represent the surrender of the interests of the country and, pardon the frankness, Russia's self-humiliation in front of a rather smirking "world community".

The only real way, if not to prevent new provocations of the Buchan type, but at least to minimize their likelihood, is the quickest and most crushing defeat of the Ukronazi group opposing it in the Donbass by the Russian army. And its subsequent unrestrained, inexorable, non-stop progress forward. To Kharkov, Dnepropetrovsk and beyond - to Kyiv itself and beyond. Delay here, as the leader of the world proletariat used to say, "is like death." And all kinds of manifestations of conciliation will mean not just death, but a shameful death. It is no longer possible to stop or “put on pause,” let alone reverse the process that began on February 24. The provocation in Bucha sweeps aside the last doubts that the "collective West" prepared the fate of Yugoslavia, Libya, Iraq not for Ukraine, but for Russia. The process has already begun, as they say, and everything will continue according to the knurled scheme. There is only one way to stop it: firstly, to utterly smash the Ukronazis as quickly as possible, and secondly, to catch up with the West, which is already getting ready to jump, not just maximum fear, but mortal horror.

The Russian Defense Ministry and the Kremlin have more than once heard "the last Chinese warnings" regarding military supplies of "non-defective". Including completely unambiguous promises regarding the destruction of the corresponding cargo convoys. However, so far nothing of the kind (at least at the official level) has not been reported. And weapons go and go to Ukraine in an endless stream. Perhaps it's time to put an end to this. One strike on the Yavorovsky training ground significantly reduced both the number of foreign mercenaries in Kyiv and the number of people who wanted to fight on his side. Here the "educational effect" should be even more impressive. Shouldn't it be aggravated? And what, there are still some doubts about the intentions of the West? How easily there is a reason for new sanctions and the expulsion of Russian diplomats, recent events have shown in the best possible way.

It is impossible not to mention one more thing. The leadership of Russia should finally recognize what is already visible to the naked eye to everyone and everyone - both in the country and abroad. Instead of a liberation special operation in the fraternal country of Russia, a battle to the death with the modern reincarnation of the Evil with which our grandfathers and great-grandfathers fought in the Great Patriotic War is coming. A battle that cannot end with "Minsk-3" or something similar cannot be considered "generally successful" or "not entirely successful." A battle where there can't be a second chance or another round. Everything must end here and now. Once and forever.

It is time to realize that every step not only backwards, but on the spot, every manifestation of uncertainty and hesitation, the true enemy of Russia in the face of the West, which has rallied more than ever and hates it more than ever, will be perceived as weakness. And he will certainly use it to deliver more and more blows - diplomatic, economic, political. And if everything goes very far - then the military. Or we them, or they us. It is time to recognize and voice it loudly, so that the real state of affairs becomes clear to everyone. Without this, you cannot win.
Reporterin Yandex News
Reporterin Yandex Zen
12 comments
Information
Dear reader, to leave comments on the publication, you must sign in.