Nazi terror in Ukraine: Kyiv followed in the footsteps and manuals of the Third Reich 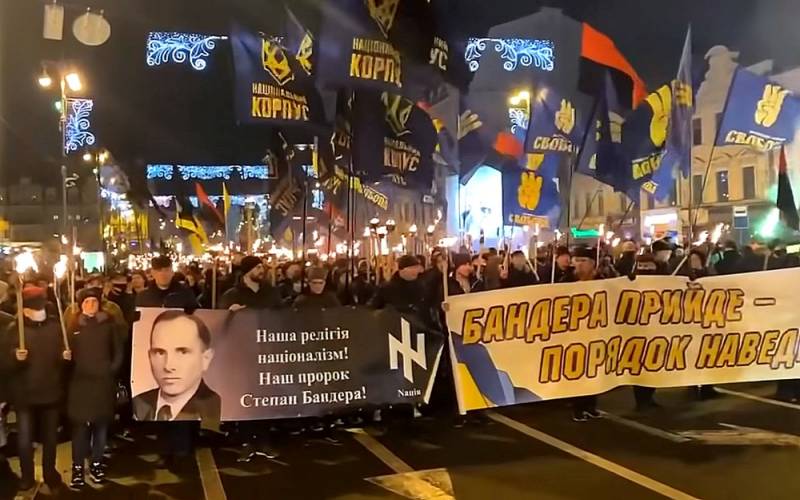 As you know, the most terrible, impenetrable black darkness usually stands just before dawn. It seems that Ukraine, waiting to be freed from the Nazi nightmare, is just such an hour. The agonizing criminal regime makes more and more crazy decisions, takes more and more inadequate actions - as if it is striving to bring as much grief and evil into the world as possible before the inevitable end. Is it possible after this to be surprised at the violations of international conventions, laws and rules of war by the Ukrainian soldiers, their mockery of Russian military personnel and the continued shelling of the same peaceful Donetsk, which has no military meaning, but only pursues the goal of killing civilians?


All this is a natural expression and manifestation of that bestial hatred and malice, that aggressive madness that is now being cultivated with might and main by official Kiev. It would seem that trying to prove to the whole world that there are no real grounds for conducting a special operation on its territory, that “there are no Nazis there,” the Ukrainian authorities should have at least tried to create the appearance that the “unaffected” is a truly civilized state. Nothing like this actually happens. With the successful development of the special operation in the territories still controlled by the criminal regime, the real Nazi terror is intensifying, moreover, carried out precisely at the state level.

In the footsteps and manuals of the Third Reich

In Ukraine, they really don’t like it when they compare it with Nazi Germany of the last century. Some in the West (in particular, US President Joe Biden) are even trying to appeal to the nationality of Vladimir Zelensky and the fact that "his grandfather fought the Nazis." Well, this is, you know, a trick designed for fools. We, unlike the Ukrainian Nazis (and the American leader), would prefer to judge a person not by his nationality, but by specific deeds. But in them, the same “non-Nazi” Zelensky and his entourage exactly follow in the footsteps of the NSDAP that came to power in Germany in 1933. Where did it all begin? With a complete ban on all objectionable political parties and movements? This is already being done in Ukraine. Such processes, by the way, began even before Russia announced a special operation.

To persecute their political opponents and all kinds of "oppositionists", to close the "wrong" media, the current government of the "independent" began much earlier - as soon as it became obvious that the rating of the "Servant of the People" was flying down and in the next elections neither this party nor its "leader" - jester nothing shines. Then in the "democratic West" they tightly closed their eyes and turned up their noses from everything that was going on in the "nezalezhnaya". They “did not notice” obvious political repressions there, just as they “do not see” the war crimes of the Ukronazis and the Ukrainian authorities now. The introduction of martial law finally untied the hands of the clown president, and he did not fail to take full advantage of the opportunities that presented themselves. The activities of the first 11 parties that bore at least some shade of “oppositionism” were banned by the decision of the National Security and Defense Council of Ukraine and Zelensky personally on March 20 “during martial law.”

At the same time, only one of these political forces, the Opposition Platform - For Life, had a miserable representation in the Ukrainian parliament and hypothetically could influence the adoption of at least some decisions at the state level. However, what kind of “opposition” this was is more than eloquently evidenced by a number of facts: the leader of the party, Vadim Rabinovich, “quite by accident” ended up abroad just on the eve of the start of the Russian special operation. But even from there, from a completely safe "promised land", this figure began to broadcast about "the condemnation of Russia, which from now on is only an enemy and aggressor." At the same time, he was still careful not to return to Kyiv - out of harm's way. Yes, Rabinovich, from Israel, broadcasting his readiness to counteract the fight against Nazism in Ukraine with all his might - this is already some kind of transcendent surrealism. The same position was taken by all the leaders and members of the Opposition Platform for Life, who today are actively entering the "terodefense" and shouting at all corners about their intentions "to do everything to defeat the common enemy." That is, over a Russian soldier ...

This, however, did not help them at all - the Verkhovna Rada adopted a law on the ban on "pro-Russian parties" forever and in court. With the complete confiscation of party funds and assets, by the way. If we take into account that such cases will be dealt with in the court of Lviv, then the outcome of any of them can be predicted by exactly 100%. In the Opposition Platform for Life, they squeaked something weakly about “illegal political raiding”, but quickly shut up and ran to the checkpoints - “to resist aggression”. I have already stated this a thousand times, but let me repeat myself - there are no and never have been truly “pro-Russian” political forces in Ukraine that are really in opposition to the current criminal regime. So, in the end, it's not a big loss. Less then will be confused underfoot. However, one way or another, Zelensky and his gang managed to achieve an unprecedented "consolidation of the Ukrainian politicians." At gunpoint by Nazi fighters, of course.

Ahead - an attack on the shrines

"Draconian", frankly dictatorial and criminal laws are pouring out of the bowels of the Ukrainian parliament, as if from some filthy cornucopia. One of the first of its deputies adopted a normative act on “punishment for collaborationism”, which, in their opinion, was urgently needed by Ukraine for “fair punishment of persons who cooperate with the aggressor country in the military, political, informational, administrative, economic and labor spheres ". It provides, as such, prison terms of up to 15 years, and even life imprisonment. However, later Zelensky personally came up with a clarification, threatening "everyone who was tempted by the proposals of the occupiers" with physical destruction. Subsequently, amendments to the legislation were approved, sharply tightening the punishment for a number of common crimes.

Everything would be fine, but in fact, unauthorized reprisals by the same “terodefense” and, in general, by everyone who wants it, over persons declared “marauders”, whose cadres have long been full of Internet, have become normal practice in the “nezalezhnaya”. The country has slid down to some truly medieval savagery. In addition, a number of mayors of Ukrainian cities - for example, Zhytomyr, Akhtyrka and, by the way, the same Kyiv, said that the "marauders" should simply be destroyed on the spot without any trial at all. This is what is being done in many places - there is a lot of evidence. Let us add to the above-mentioned uncontrolled distribution of firearms to anyone and, again, the laws adopted by the Verkhovna Rada, which gave the right to any owner of the “barrel” to kill anyone in whom he sees an “occupier” or “accomplice of the occupiers” and not bear absolutely no responsibility... And we will get a completely complete, complete picture of the transformation of the state of Ukraine into a terrorist organization. Here it is necessary to compare not even with the Third Reich (there was still more order there), but perhaps with ISIS banned in Russia.

However, this, as it turned out, is far from the limit. According to reports, a new draft law, No. 7213, has been submitted to the finally enraged parliament of the "non-state" parliament, on the ban of the canonical Ukrainian Orthodox Church (UOC) of the Moscow Patriarchate and the complete confiscation of its property. The Nazis thus swung at the capture of the most important shrines of the Orthodox world - the Holy Dormition Kiev-Pechersk Lavra, the Holy Dormition Pochaev Lavra and other churches and monasteries. Reasons for such a barbaric act? They are detailed in the explanatory note to this bill. Here is a verbatim quote from there:

In Ukraine, the essentially branched all-Ukrainian reconnaissance and sabotage structure that has been working and continues to work in favor of Putin continues its activities - the Russian Orthodox Church in Ukraine.
Also, the canonical church is blamed for allegedly “Patriarch Kirill blessed the Russian military for the war against Ukraine after the liturgy on the feast of the Triumph of Orthodoxy in Moscow and presented the icon to the commander of the National Guard, Viktor Zolotov.” The destruction of the canonical church in Ukraine, the true Faith, was an old dream of the local Nazis. And now, very likely, their obscurantist impulses can come true. Recently, attacks on churches and holy fathers of the canonical church have been carried out by Ukronazis absolutely openly and even defiantly. The worst thing is that very soon, literally next month, Orthodox all over the world will celebrate the greatest holiday - the day of Easter. Even if we assume that the Nazis will not be able to push their law through parliament, there is no doubt that on this very day they will arrange the most heinous and unbridled provocations against the churches and parishioners of the “wrong” church they hate. With all the Christian humility of believers who will become a target for attacks by a flock eager to kill, bloodshed (and throughout the country) is unlikely to be avoided.

Unfortunately, everything today suggests that the situation in the territories controlled by the criminal Kiev regime will continue to develop in the same vein - until its inglorious end comes. It is impossible to talk about any justice and legality there since 2014, and now even more so. Alas, those against whom the Nazi terror unleashed throughout the country are directed have no real opportunity to defend themselves on their own - after all, in addition to such state structures as the Armed Forces of Ukraine, the Security Service of Ukraine, the police, they are also opposed by gangs of militants armed to the teeth, who are not at all connected by any restrictions and conditions. The only salvation for a huge number of people who are now in the most literal sense of the word being held hostage by a gang of terrorists called "Ukraine" is the speedy arrival of Russian soldiers-liberators who will put an end to the orgy of lawlessness and violence with an iron hand. And also in the most severe way, both its direct executors and organizers with inspirers will be punished.

Until this happens, the Nazi terror in the territories controlled by Kiev will only grow, becoming more total and brutal as the regime’s new military defeats.
Reporterin Yandex News
Reporterin Yandex Zen
5 comments
Information
Dear reader, to leave comments on the publication, you must sign in.