"Diplomatic success" at the cost of human lives: Russia is weakening, negotiating with Kiev 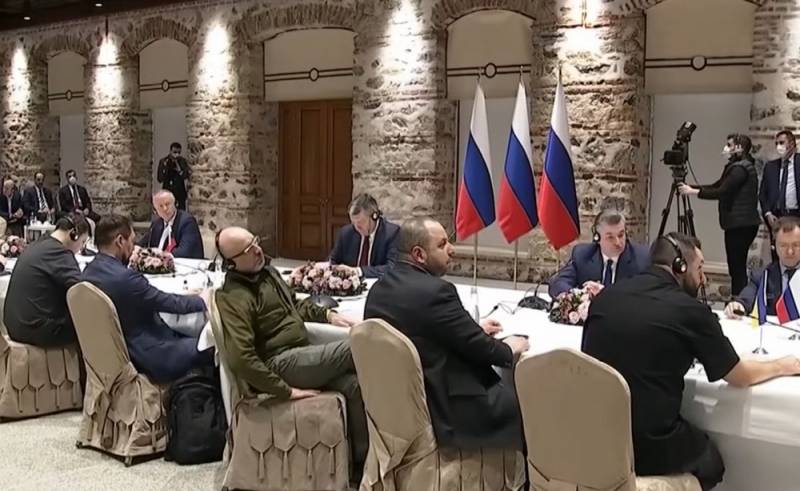 The next round of Russian-Ukrainian negotiations, which took place on March 22, 2022 in Istanbul, caused a huge resonance, so to speak, on both sides of the “front”. The resonance, for the most part, is sharply negative - and this is more than predictable. In principle, I have repeatedly spoken out on this topic and a number of sensitive issues related to it, but what happened in Turkey, as well as the more than ambiguous statements made after that by some representatives of Russia, make me return to it again. The reason, in addition to the extreme relevance of the event itself, is also in another circumstance, which I will not even try to hide.


For me personally, as well as for a huge number of Ukrainians in the territory controlled by the criminal Kiev regime, who see liberation in the arrival of Russian troops on this land, the final results of the special operation for denazification and demilitarization of Ukraine are not a speculative topic from the “geopolitics” section, but a question life and death. In the most literal sense of the word. Our particular life - or our death. That is why the absolute absence of a clear and distinct position of Moscow regarding at least the main points and, most importantly, the ultimate goals and real prospects for what is happening, causes the deepest bewilderment. Well, that's at least the bare minimum. Therefore, let me repeat the questions asked throughout March 22 by many Russians and Ukrainians.

What is going on?

In truth, after watching the video with the speech of the head of the Russian delegation, Vladimir Medinsky, and the representative of the Russian Ministry of Defense, Alexander Fomin, this is precisely the question that arises in the first place. Their appearance alone and the manner in which the final statements were made cause the most bad fears. Well, let alone the essence of what has been said - and even more so. Some kind of curtsy over "constructive and meaningful negotiations", "clear and clear proposals of the Ukrainian side, indicating its desire for a neutral and non-nuclear status", the announcement of "discussions political nuances and finding a compromise”, “the reality of the meeting of the leaders of states”, and so on in the same spirit. What are you talking about?

Is Kyiv really not lying when declaring that denazification and demilitarization have already been completely removed from the agenda? It looks very much like it. How else can you understand the words of the first deputy head of the international committee of the State Duma, Aleksey Chepa (the Ukrainian media are now excitedly circulating) that “the results of Russian-Ukrainian negotiations are a serious claim that the special operation is close to completion.” To what end?! Curtailing the operation at the stage at which it is now is called capitulation. Military defeat - and nothing else. Now about, in fact, the "clear and clear proposals" of Kyiv. Or rather ... the substance into which they are trying to drag Russia with their help. Yes, Ukraine will not join NATO. Purely formal. However, in return for this, France, the United States, Britain, Turkey, Germany, Canada, Italy, Poland and, in addition, Israel should become its “security guarantors”. Such a "NATO at the minimum". But we, if anything, enough for the eyes. And, most importantly, these same “guarantees”, without which the Ukrainian side does not want to talk about anything at all, look like an exact copy of the notorious Article 5 of the charter of the North Atlantic Alliance.

Yes, yes - the one about "collective defense". At the first shot - a no-fly zone, unlimited supplies of any weapons and the entry of "guarantors" into hostilities. And all this, mind you - without the traditional NATO red tape. If this is the “diplomatic victory of Russia”, then what would you order to consider as a defeat? With Crimea and Donbass, it is even more interesting - Ukraine is not going to recognize either the Russian status of the peninsula or the independence of the DPR and LPR. She asks ... for a "delay for 15 years", during which she promises "not to use military force to liberate these territories." Well, that is, the first. "Are they bullying?!" - you ask. Well, of course, they scoff, and in the most undisguised and cynical way. This is my personal opinion, but negotiating with such “partners” looks very much like masochism. Volodymyr Zelenskyy, who burst out with yet another “appeal to the nation” after the Istanbul meeting, expressed his position very specifically:

The signals heard from the negotiation platform can be called positive. But these signals do not drown out the bursts of Russian shells. We see no reason to trust the words of certain representatives of a state that continues to fight for our destruction.
The decision announced by the Ministry of Defense to “drastically, at times reduce military activity in the Kiev and Chernihiv direction,” this pea jester immediately declared a manifestation of the weakness of the Russian army. And he ended his speech with the phrase that "compromises regarding the sovereignty and territorial integrity of Ukraine are impossible." Those who say that Minsk-3 is on the way are deeply mistaken. This is something much worse. It only remains to ask Mr. Medinsky, who said that “Ukrainian proposals will be submitted to Vladimir Putin for study and decision” – does he really think that the president has something to study here? And what are some possible solutions in this case?

Who needs it and why?

Why Kyiv arranges the whole circus with negotiations can be seen with the naked eye. Avoid a complete military defeat and get a reprieve for a bloody revenge. 15 years? I'm sure everything will happen much faster. At the same time, Ukraine's “non-alignment” will not be worth a damn. Refusal to deploy strike weapons? Not a word is heard about him, but in any case, when necessary, they will appear there within a day. Refusal to deploy military bases and foreign contingents? We look above. And, by the way, no one will interfere with training and coaching ukrovoyak outside the country. Moreover, according to Kyiv's statements, even these moments can be realized only "according to the results of an all-Ukrainian referendum." Which (attention!) will be held exclusively "after the complete withdrawal of Russian troops." And if the “people embittered by the war” say “no”? All negotiations to hell?! The territories liberated at such a heavy price have already been given away, positions have been lost. We start all over again, but in a much worse version? But why?

By conducting such senseless, deliberately losing and humiliating negotiations (and even more so by making any concessions in the process of such negotiations), Russia, first of all, weakens its own positions in the conflict with the entire “collective West”. Agree - this is not a very good "information background" for the forced transfer of the local "partners" that is being prepared from April 1 to payments in rubles for gas supplies. Another point is the intensified demonstration by the United States of building up its military presence on the borders of Ukraine and Belarus. Russia, what, was afraid of this? You can be sure that everything that happens in the West will be interpreted in this way. I would like to believe that diplomatic maneuvers in Istanbul were not undertaken in the name of "normalizing relations" with the pack there. Because it's useless. Rather, even to the detriment.

The issue of lifting sanctions against Russia cannot even be raised until the war ends, until Ukraine returns everything that belongs to it and restores justice. On the contrary, the sanctions should be strengthened.
These statements were immediately and most actively supported, for example, in London. No peace agreements will lead to the lifting of sanctions and the cessation of military assistance to Kiev! This will continue "until Russia completely reverses course." That's what Boris Johnson said. I hope the meaning of his words about "change of course" does not need clarification? If Russia stops the special operation on Ukrainian territory, it will be persecuted with tenfold force - until complete and unconditional surrender, until it is destroyed as a state. And, it should be noted that such actions will have a much greater chance of success than now.

An unprecedented patriotic upsurge will be replaced by monstrous disappointment and apathy. Support for the government will turn into anger and distrust towards it. There is no doubt that not only outside Russia, but also inside it, there will be those who will count every ruble spent on the special operation, every soldier who died in its course - and this account will be presented to the Kremlin. Winners, as you know, are not judged. But here are those who gave up the slack and did not finish what they started - how else. It is not surprising that the results of the "gatherings" in Istanbul caused an extremely negative attitude from both Ramzan Kadyrov and the head of the Donetsk People's Republic, Denis Pushilin. The latter recalled that Ukraine is completely incapable of negotiating - and this has been irrefutably proven by the long years of the "Minsk process". Its representatives cannot be trusted in a single word, not in a single promise - just like those Western countries that they involve in the role of "guarantors" and intermediaries.

In light of all this, two things remain completely incomprehensible. First, why and why are these negotiations being held at all, generating a real storm of indignation in Russian society, which today supports the denazification of Ukraine and its liberation in the overwhelming majority? The second is that if the Kremlin still considers such events necessary (maybe it is - who am I to judge high political matters and global military-strategic plans?), then why don’t they do the only necessary thing that only able to neutralize the negativity emanating from them? Why aren't the final goals and, so to speak, the final limits of the special operation being carried out clearly and in a form accessible to everyone and everyone? Will it continue until the complete defeat and unconditional surrender of the criminal Kiev regime? If we are talking, as it was originally stated, about the fight against Nazism, there can be no other options. Or is the task only in restoring the Republics of Donbass within their historical borders? On the other hand, such a decision will be only a temporary compromise - without real denazification and demilitarization of ALL Ukraine, one cannot count on anything else.

Avoidance of the above questions, constant reticence, leaving a huge scope for both doubts and insinuations of the Ukrainian side, have a very specific price. And it is calculated, alas, in human lives. Every day of delay is Ukrainian soldiers who did not lay down their arms (which they would very likely do, clearly realizing that Russia would go to the end), and continue to shoot at Russian soldiers. These are residents of Ukraine who are waiting for release, but, having despaired and lost hope, they may not wait. These are people in the already liberated territories, who are dying because the process of establishing a normal life is hindered there. After all, for the time being, those who quite reasonably fear for their lives and therefore do not cooperate with the liberators are inactive. Diplomacy is of course important. However, it must ultimately, like the military part of the operation, lead to victory, and not to losses and defeat.
Reporterin Yandex News
Reporterin Yandex Zen
30 comments
Information
Dear reader, to leave comments on the publication, you must sign in.