Not a single atom: Russia is preparing a LNG icebreaker

17 September 2018
1
Today, only the lazy one does not know about the potential and prospects of the Northern Sea Route. Russia, due to its geographical location, controls most of the unique transport artery, which provides the shortest waterway from Asia to Europe. Among the Russian corporations, the first to see new business opportunities was Rosneft, which began the construction of the Zvezda super-shipyard in Primorye, where ice class ships and even icebreakers would be built for its needs. 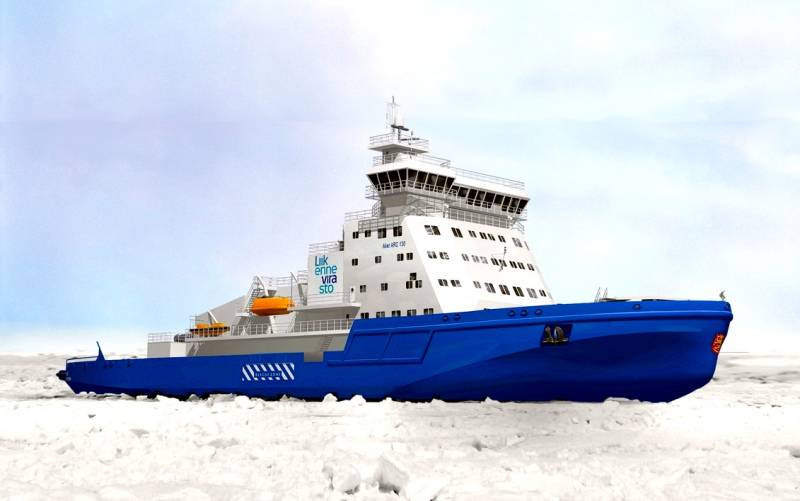 Now it’s NOVATEK’s turn to grab its portion of the cold Arctic pie. This company produces natural gas and gas condensate in Yamal, while Gazprom Neft produces black gold. It is expected that the total amount of hydrocarbons transported by sea in the Arctic will be about 41 million tons, while some of them will go to Asian markets along the Northern Sea Route. To pass through it requires special ice class ships, as well as escort icebreakers.

Our country has a unique icebreaker fleet, but a significant part of it is outdated and needs to be replaced. Three new nuclear-powered icebreakers are currently under construction in St. Petersburg. There are plans to increase their number to five, as well as the creation of three Leader super-icebreakers. But all this will require huge investments for implementation, and will take a lot of time. And business needs need to be served now. The situation is complicated by the fact that, according to the requirements of the International Maritime Organization, the use of fuel oil vessels in the Arctic will be banned from 2021, and the use of diesel throughout the Northern Sea Route in its difficult conditions will be an expensive pleasure, which will reduce the attractiveness of the NSR for commercial use.

Therefore, the optimal solution may be the construction of icebreakers operating on liquefied natural gas. Thanks to the LNG infrastructure in the North, these icebreakers will always be provided with fuel. They can be very effectively used on a short transport shoulder with an ice thickness of up to 3,1 meters. The developer of the LNG icebreaker project is the Finnish company Aker Arctic Technology. The partners of the new shipbuilding project are NOVATEK and Rosatom, as well as the Chinese transport company COSCO and the Silk Road Fund. Together with investors from China, NOVATEK is creating the Arctic Marine Transport, which is primarily aimed at exporting LNG, but carriers from other countries have also shown great interest in its capabilities.

In addition to investments, China can directly participate in shipbuilding:

First, China can undertake the supply of necessary equipment and ship steels. Secondly, to take part in the construction of parts of the buildings, leaving the title of the main builder to Russia.

As for the complete transition of the Russian Northern Fleet to LNG, experts say this is premature. It makes sense to use liquefied natural gas as fuel in certain segments; in the foreseeable future, the main Russian icebreakers will be nuclear-powered icebreakers.
Ctrl Enter
Noticed oshЫbku Highlight text and press. Ctrl + Enter
We are
Russian LNG: why Americans are so furious
Arctic Cascade: Russia has revealed a new way to liquefy gas
Reporterin Yandex News
Read Reporterin Google News
Ad
We are open to cooperation with authors in the news and analytical departments. A prerequisite is the ability to quickly analyze the text and check the facts, to write concisely and interestingly on political and economic topics. We offer flexible working hours and regular payments. Please send your responses with examples of work to [email protected]
1 comment
Information
Dear reader, to leave comments on the publication, you must sign in.