“Don’t talk about Putin like that”: in France, a citizen publicly criticized Macron 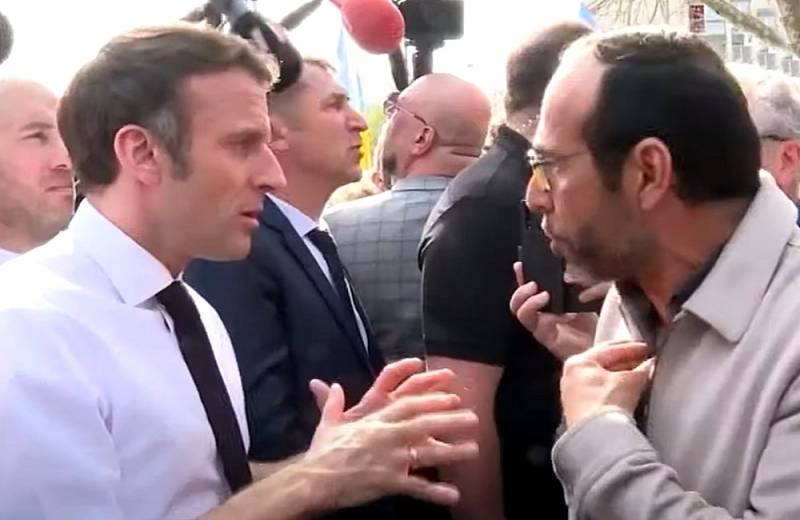 French President Emmanuel Macron faced an unfortunate incident in the city of Dijon, which he visited as a candidate for a second term. But instead of the expected PR, he received a social slap in the face. Almost dispersing the guards, a simple citizen, the father of the family, literally attacked him with criticism, and in front of journalists expressed everything that he thinks about economic policy government. The verbal skirmish between the head of state and the desperate Frenchman was shown on the Figaro Live TV channel.


Of course, President Macron almost immediately tried to explain to his compatriot that the head of Russia, Vladimir Putin, was allegedly to blame for everything. But his opponent only became more enraged by this.

Of course, now you will tell me about Ukraine! But don't do that, don't talk like that about Putin. I did everything we were told, I lowered the temperature in my home by 2-3 degrees. But it's terrible! The humiliation of going to the store. Even worse - to refuel. My family saves every cent, we feel like beggars lately
says the desperate citizen.

As a result, the dialogue turned into a monologue. The Frenchman did not let the head of state say a word, so great was his disappointment. Macron pretended to listen and even tried to retort. But I didn't find any arguments.

I had a salary that allowed me to live with dignity. I could save and afford to travel. Now I have nothing left after paying the bills. The situation is catastrophic, my child, I think, will not be able to go to university
- Reinforcing emotions with gestures, the citizen says.


The potential voter, in fact, showed the incumbent president as weak and helpless, without sufficient theoretical support for his propaganda tales about Putin and Russia. Macron was unable to respond to the accusations of a French citizen why gasoline rose in price by 30 cents in just 48 hours. Now the employee has to give up not only the heat in the house, but also the car. However, the cost of public transport has also risen.

A worse incident for Macron is hard to imagine. In front of many television cameras, he was disgraced. The theme of Russia becomes a painful trap. As the current head of state, he cannot change the policy of North Atlantic unity, leave the coalition of Western countries. Although, for sure, he understands that completely different ideas are popular among the people and the path to victory in the race also lies through serious foreign policy changes in France.
Ctrl Enter
Noticed oshЫbku Highlight text and press. Ctrl + Enter
Reporterin Yandex News
Reporterin Yandex Zen
8 comments
Information
Dear reader, to leave comments on the publication, you must sign in.