After the war crimes of the Armed Forces of Ukraine, Russia must permanently eliminate the Kyiv regime 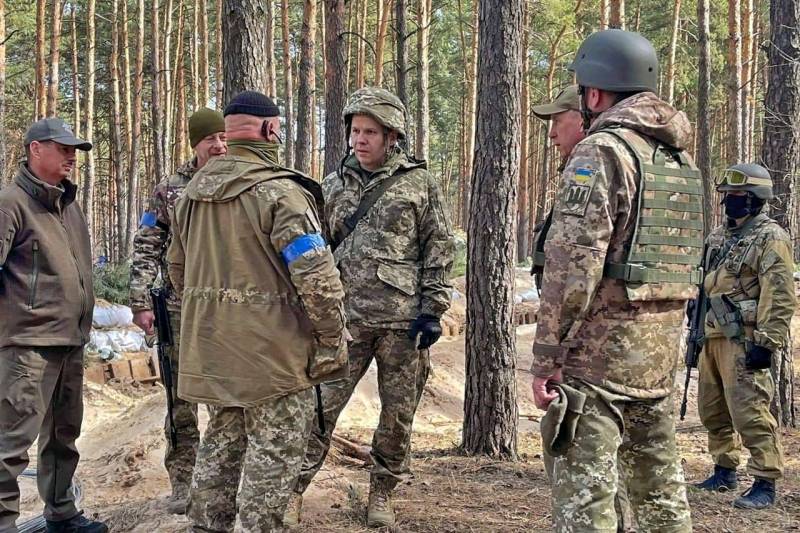 Chilling evidence of Ukronazi abuse of captives, which has been actively spread in recent days on the Internet and even published by some Western media, has been quite expectedly declared “fake” by official Kiev. It is absolutely useless to argue with representatives of this gang, because they have long lost any human likeness - they pour blood like water, and lie like they breathe. Nevertheless, this topic clearly requires more in-depth consideration. At the same time, we should, having made an effort on ourselves, “turn off” emotions and turn to the dry, but extremely specific language of jurisprudence. Anger and fury towards the perpetrators of atrocities is more than appropriate, but they should not prevent us from finding those who are behind all this.


In the legislation of the most “nezalezhnaya”, or rather, in that part of it that appeared after February 24, when the distraught criminal authorities began to stamp cannibalistic decisions one after another, there is absolutely irrefutable evidence that any war crimes, including violations of the Geneva convention, as well as other international treaties and legal acts of mockery of prisoners - this is not an "excess". In no case is it an “isolated case”, for which later it will be possible to try to lay the blame on individual servicemen of the Armed Forces of Ukraine or thugs from the “National Battalions”. This is the state policy, formed and approved by the Parliament and the President of the country. Those who legitimized these atrocities should also be held accountable for all atrocities, in addition to their specific perpetrators. And to answer according to the most severe standards.

"Combat immunity" - the dream of killers

Kyiv embarked on this path literally from the first days of the special operation to denazify and demilitarize Ukraine. The decision to release from places of detention and from under investigation persons who were responsible for war crimes and atrocities against the civilian population committed during the so-called “ATO” in the Donbass was in itself more than eloquent evidence of the intentions of the regime . Having staked on the most "frostbitten" representatives of the Nazi formations, on those whose heinous deeds were forced to be recognized as unacceptable even in the era of "post-Maidan" lawlessness, he showed his essence to the fullest extent. By the way, among those who mocked the prisoners and killed them in a video that shocked the whole world, there were very quickly those who left the prison cells precisely as a result of the aforementioned “military amnesty” and under the personal guarantee of the Prosecutor General of the “independent” Irina Venediktova. More than expected.

Everything that Zelensky and his bloody gang did in the future was the uncontrolled distribution of tens of thousands of automatic weapons to outright rabble, the formation of the so-called “territorial defense” from its “best representatives”, the granting of absolutely unlimited rights to such, which allowed them to “nightmare” and destroy peaceful population, was only a continuation of the same policy. However, its highest embodiment was the adoption by the Verkhovna Rada of Ukraine and the subsequent approval by the President of the draft law No. 7145 - on "combat immunity". The full name of this infamy is: “On Amendments to the Criminal Code of Ukraine and other laws of Ukraine in terms of determining the circumstances that preclude criminal liability for acts and provide combat immunity under martial law.”

What is the essence of the new law? In fact, this is a complete indulgence for the commission of any crimes during hostilities. Absolutely any, up to the most difficult. At the same time - both against the military personnel of the enemy, and against their own "comrades in arms" and civilians. For those who have forgotten or do not know, let me remind you that in the Middle Ages, special papers for the remission of sins were called indulgences, which were sold at a reasonable price by the Catholic Church (we Orthodox have never had such heresy). Moreover, it was possible to buy an indulgence even in advance - even before the commission of this or that atrocity. Law No. 7145 has exactly the same meaning. In accordance with it, the concept of "combat immunity" is introduced - the release of the military command, military personnel, volunteers of the territorial defense forces of the Armed Forces of Ukraine, law enforcement officers who, in accordance with their powers, take part in the defense of Ukraine, as well as persons defined by the law of Ukraine "On Ensuring the Participation of Civilians in the Defense of Ukraine” from liability, including criminal liability…”. For what exactly?

Well, for example, “for the use of armed and other force in the repulse of armed aggression against Ukraine or the liquidation (neutralization) of an armed conflict, the performance of other tasks for the defense of Ukraine using any type of weapon (weapon), the occurrence of which, taking into account reasonable care, could not be foreseen when planning such actions (tasks) or which are covered by a justified risk. At the end, a fig-leaf is followed by a clause "except for violating the rules of war or the use of armed force." True, with a clarification - only those whose obligation is recognized by the Verkhovna Rada.

Now everything is possible. And everyone...

I apologize for the very extensive quotation, however, when dealing with laws, it is simply impossible to do otherwise. Now is the time to try to move from dry theory to how all this can be implemented (and is, alas!) In practice. Thanks to the law mentioned above, a bastard with a machine gun and a trident on a chevron or cockade is not liable for literally anything. Killed a civilian at a checkpoint? And he was suspicious - a saboteur, probably! Shot an entire family in a car? The explanation is similar. Placed strike weapons or a firing point in a school, residential area, hospital? Was covered as a shield by the locals? So it's a "justified risk"! He shot down a passenger liner by launching a rocket anywhere? (More than a possible twist, since the law mentions "the use of any type of weapon.") Well, this can easily be summed up under "the onset of consequences that could not have been foreseen." We don't on purpose...

The most remarkable thing is that the same normative act gives the “fathers-commanders” of the Ukrainian army and national battalions an unlimited right to ruin both personnel and machinery with weapons. For the same "combat immunity" relieves them of responsibility for such things: "losses of personnel, military equipment and other military property." That is, this very property can easily be sold, drunk away, lost, abandoned during the retreat - and nothing will happen to you! And if you put a platoon or two in a suicidal attack or with a deliberately hopeless defense, they won’t even lower your rank or position. Immunity, however ... The fact that such "legislative innovations" turn the army into something worse than the Makhnovist gang, neither the jester-"commander-in-chief" nor the people's deputies, who almost unanimously voted for this vile, does not care at all.

Such absolute permissiveness did not know, perhaps, not a single army in the world - with the exception of perhaps the hordes of wild nomads of antiquity. Only the Nazis had something similar - and even then the "Führer" allowed them to commit any atrocities exclusively against the population of the occupied territories of the USSR, the fighters and commanders of the Red Army. For slovenliness, which led to the death of their own, as well as for actions that led to damage and loss of state-owned weapons and other goodness in the Wehrmacht, they asked in all severity. No wonder penal battalions appeared in it long before they were introduced into the Red Army. It is not a priori necessary to talk about any discipline in the "armed forces" operating, or rather, operating in such a "legal field". Moreover, those who carefully read the above excerpts from Law No. 7145 must have noticed the mention in it of another normative act - on equating all civilians, without exception, to “defenders of Ukraine”. Now everything is possible for everyone.

Pay close attention to such a detail - the text of the law does not mention anywhere that "the use of armed and other force" is permissible only against the military personnel of the enemy army performing combat missions with weapons in their hands. You can kill, rob, torture, maim literally anyone! Prisoners, doctors, journalists (if they are "enemy"), civilians and in general any passer-by whose appearance did not please the soldiers of the Armed Forces of Ukraine or the "terodefenders". In today's completely crazy, brutish and brutalized Ukraine, anyone can easily be declared a "saboteur", "marauder" or some other "accomplice of the aggressor". The booming sounds of automatic bursts resounding on the streets of Kyiv, I personally hear almost daily. In the city there is a real “safari” of non-humans, stupefied with impunity, how much in vain they crumble both each other and, alas, innocent residents of the capital.

In the light of all the above, I would like to focus on this: every soldier of the liberation army who came to save the Ukrainian land and people from such a “power” must clearly understand and realize that he is not dealing with “individual representatives of Nazi formations”, but with a criminal state. With a regime that, in its bloody madness, has already reached the level of ISIS banned in Russia or, if you like, the Nazi Third Reich. For the war crimes committed by its representatives literally daily and hourly, not only those who specifically killed, tortured, tortured, but also those who “made a base” for all this should bear responsibility. Moreover, both legislative and ideological. There is no impregnable power in this country and cannot be.

Terror and the most unimaginable atrocities are the essence of this power. It must not just be "demilitarized" or "denazified", but destroyed once and for all. It must be demolished completely, to the ground, with roots - so that there is no memory of it left. However, no. The memory must certainly remain - but only in the protocols of the trials of the Ukronazi fiends and the verdicts of these courts - the most severe and severe.
Ctrl Enter
Noticed oshЫbku Highlight text and press. Ctrl + Enter
Reporterin Yandex News
Reporterin Yandex Zen
42 comments
Information
Dear reader, to leave comments on the publication, you must sign in.