Will Putin become the new Stalin, or will he surpass him? 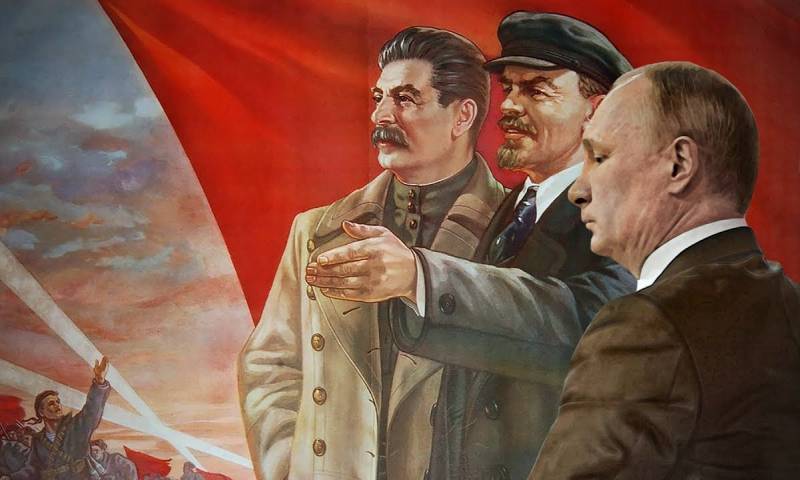 European Commissioner for Trade Valdis Dombrovskis the other day literally issued the following passage: “I would say that Putin is drifting more and more towards Stalin!” Did you just now notice? “Late ignition” and the slow thinking of some EU figures (especially those with Baltic roots) are so obvious that it’s a sin to even joke about them. Moreover, Mr. European Commissioner, clearly wanting to throw a heavy blow in the face of our President political insult, without knowing it, gave him a fair compliment. Well, how can the poor know that in Russia Stalin is the most popular and revered historical figure of the past?


Be that as it may, but the parallels between Vladimir Vladimirovich and Iosif Vissarionovich, already repeatedly drawn earlier, starting from February 24 of this year, acquire a completely new meaning. Do they have a basis? Personally, I think so. Really, it’s worth trying to figure out what is the similarity between the two uniquely great leaders of our Motherland. Let's not go into all sorts of "subtle matters" like psychology and the like. Let's talk about quite specific cases, achievements and failures. Believe me - there is something to compare.

Rebuilding the country, preparing for war

It is clear that the current president of Russia did not get the national economy in such a terrible state as it was in the young Land of Soviets after the First World War and the Civil War, which plunged everything that was left of the Russian Empire into devastation and poverty. Although... “Prihvatization”, the transfer of the vast majority of state property to private (and not always honest) hands, which caused a complete, practically, collapse of industry, infrastructure, and the social sphere - all these were still “gifts”. Stalin had to create everything from scratch, from scratch. Putin - to restore. And another big question is what to do easier.

At the same time, the threat of foreign invasion and the prospect of war against the entire Western world hung over the USSR literally from the moment of its creation, because our country, by definition, was an antagonist of the capitalist states. Russia, on the other hand, for some time conscientiously tried to "fit" into the new geopolitical alignment that emerged after 1991 and become an "acceptable member of the world community." In any case, it looks very significant that from the moment the Nazi state was created, the only purpose of which was war against our country, and until a direct collision with it, both leaders had exactly the same time - 8 years.

The tasks were also similar - the creation (for Stalin) or the restoration (in the case of Putin) of combat-ready Armed Forces and a powerful military-industrial complex. Rearmament of the army and its advanced equipment technique. Ridding the country of the "fifth column", potential traitors, patriotic education of the population, its preparation for military hard times. At the same time, one should take into account such a fact, which is taken into account by far not everyone - the period of the most severe sanctions, in fact, a complete trade blockade of the USSR by the capitalist "collective West" ended years before the start of the Great Patriotic War.

Our "sworn friends" during the "great depression" and after it were forced to cooperate with the hated "soviets" for the sake of their own economic survival. Russia, precisely since 2014, has been under an increasingly powerful “pressure” of ever-increasing sanctions pressure. One way or another, but the main tasks were generally completed in both cases. At the same time, it should be noted that today's Russia has weapons that completely discourage the aggressive NATO bloc, which has as its ultimate goal the destruction of our country as a sovereign state, to enter into an open war with it. On the other hand, in 1941 such weapons simply did not exist in nature.

The defeat of Nazism

I hasten to make a huge request to all readers who may see something blasphemous in equalizing the Great Patriotic War and a special operation to denazify and demilitarize Ukraine - I do not intend to do anything like that. However, one cannot but admit that in both cases we are dealing with an extremely aggressive and militarized regime professing Nazi ideology (enough stupid talk about “Ukrainian nationalism”, Nazism is Nazism), coached by the “collective West” and, above all - its Anglo-Saxon part for a war of extermination against our Fatherland. As in 1941-1945, our country is opposed, in fact, not to one country, but to the whole of Europe, helping our enemy with resources, finances, weapons, volunteers. Except that last time the United States and Britain pretended to be our "allies", there was some sort of "Lend-Lease". Now they have openly come out against us, and "Lend-Lease" in its new incarnation is intended for our adversary.

One way or another, Vladimir Putin, who acts as the Supreme Commander-in-Chief, as in his time before Generalissimo Stalin, still faces the same task - to defeat the Nazi state, which is the advanced armed detachment of the "collective West", saturated with misanthropic ideology, committing war crimes, corrupting both its citizens and everyone around with disgusting malice and lies.

The enemy must be defeated, and Victory will be ours - for our cause, as in the Great Patriotic War, is right. At the same time, let me note that this time we managed to avoid a repetition of the tragedy of June 22, 1941. Prevent the enemy from inflicting a vile and sudden crushing blow. More and more captured documents, obtained and published by the Russian Ministry of Defense, allow us to assume that this is exactly the scenario that everything went. I don’t see the slightest reason not to believe them, and, therefore, this time the situation is still developing according to the best option. The only direction where there is currently a clear lag is the fight against the "fifth column", with obvious and hidden traitors, internal enemies of the Motherland.

Absolutely correct measures aimed at their eradication were taken by the current government obviously belatedly. With the liberal public and other "agents of influence" of the West, they played almond and rushed for too long. What can I say - Comrade Trotsky was sent to Istanbul back in 1928, and Mr. Chubais drove off to the same address just a couple of days ago, having managed to play tricks. I will not flatter this figure by comparing him with Lev Davydovich, but certain parallels, you see, suggest themselves. However, let's hope that time is not hopelessly lost and that Vladimir Vladimirovich will have time and will be able to make up for lost time on this front. Actually, it's already catching up.

War against the dollar and US hegemony

The uncompromising struggle against the dollarization of the world economics, the creation of an alternative "center of power", a kind of "common market", which would be dominated not by green candy wrappers, but by the ruble backed by gold and all the property of the USSR - all this refers to those deeds and achievements of Stalin, which, alas, are rarely remembered. Rejection of the discriminatory decisions of the Bretton Woods Conference, which turned the United States into a "world banker", the establishment of the Council for Mutual Economic Assistance in 1949 (the Americans then created NATO).

The convening of an economic forum in Moscow in 1952, at which not only developing countries, but also Austria, Sweden, Finland expressed their readiness to join the “dollar-free economic zone” that was being born under the auspices of the USSR ... These were the contours from which it could well have been born the very “multipolar world” for which Russia is fighting so fiercely today. Alas, all these victories were mediocrely squandered by the subsequent leaders of the Soviet Union, which allowed Washington to take the place of the "world hegemon". Today, everything has to start from scratch. However, all the current actions of Vladimir Putin indicate that the decisions he makes are not at all impulsive attempts to achieve success, but the implementation of a plan carefully thought out for years and years ahead.

The key to our Victory in this struggle should be another great deed of Stalin, which only Vladimir Vladimirovich turned out to be able to repeat - the establishment of not just friendly and good-neighborly, but allied relations with China. Among serious Western analysts (and not contract hacks), the opinion was repeatedly expressed that such an alliance would be the end of the "era of the West." It is very likely that these predictions are coming true before our very eyes. If Putin completes the deadly battle begun by Stalin with the green financial "serpents", if he wins, this will be the greatest act of his reign and life, elevating the president to the pantheon of the most glorious statesmen of our Fatherland. Exactly so - and nothing else, because this will mean the beginning of a completely new century, not only for Russia, but for all mankind.

In what seems today an incredibly distant year 2018, my article was published on the Reporter with the following heading: "Putin can make Washington's worst dream come true". It is still available for reading on our website. The subheading there was the following: "Will America be able to make a new Stalin out of the Russian president?" And there were also such words: “Most likely, neither Putin personally nor his inner circle wants Stalinist power at all (and the same responsibility for the fate of the country!). However, one cannot but admit that Vladimir Vladimirovich is the only one of the modern leaders of the Russian state who can do something like this, if the historical circumstances are so. Not at all pretending to the laurels of Nostradamus, at least one prophecy that came true, I, it seems, I can safely write down at my own expense. Our “sworn friends” succeeded, and even better than one could expect - let them blame only themselves now.

Under Joseph Vissarionovich Stalin, the Union of Soviet Socialist Republics was at the highest point of its development, its heyday and power. Alas, after the death of the Leader, the country did not follow the vector he set, which ultimately ended in her death. Today, we can only believe that Russia, returned by Vladimir Putin after many losses and terrible mistakes, to the main path of its History, will not turn off it under any circumstances.
Ctrl Enter
Noticed oshЫbku Highlight text and press. Ctrl + Enter
Reporterin Yandex News
Reporterin Yandex Zen
42 comments
Information
Dear reader, to leave comments on the publication, you must sign in.