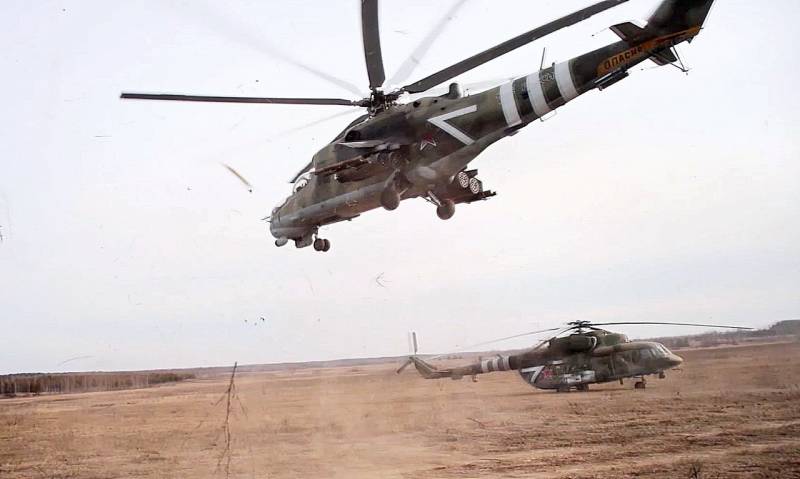 The famous lines: “It was smooth on paper, but they forgot about the ravines ...” are applicable, perhaps, to any military campaign. In more or less degree. World history does not know of examples of accurate and well-thought-out plans, even the most carefully developed in the quiet of the offices of headquarters and intelligence, were executed "as written." What can you do - an armed conflict belongs to the field of phenomena in which it is impossible in principle to foresee and predict absolutely everything. The skill of the developers and planners in this case does not lie in XNUMX% foresight, but in, based on the most realistic prerequisites, to achieve the maximum approximation to the realities in which the troops will have to operate.


In the fullest measure, all of the above applies to the special operation of the Russian Armed Forces for the denazification and demilitarization of Ukraine. There were many forecasts and predictions about how it will proceed, but it is quite possible to speak about how well-founded they turned out to be already now - a day before the deadline, when a month has passed since its beginning. The first month... I'll make a reservation right away - I will leave the analysis and analysis of everything that was said and written in Russia on this topic to my esteemed colleagues. I myself want to bring to your attention a short list of those "prophecies" and promises that sounded from Ukraine and its allies. This choice is conditioned, first of all, by the fact that I have the opportunity to work with those sources that are currently unavailable in Russia. So let's get started.

It should be said right away what exactly to wang - that is, to express in a peremptory form absolutely accurate and beyond any doubt forecasts in the “non-destructive” from the very first days, almost everyone rushed. From those in power and "military experts", to, God forgive me, sorcerers, psychics and other public, with their demonic possession causing a keen desire to revive the Holy Inquisition. They tried their best, pouring real waterfalls of the wildest nonsense on the brains of Ukrainians, and even trying to somehow “justify” their own nonsense. Aleksey Arestovich, adviser to the head of Zelensky's office, deserves an unconditional palm among the most notorious liars from the authorities. And not only due to the fact that all his "predictions" invariably turn out to be enchanting finger hits in the sky. This character also “changes his testimony” with such frequency that even the most orthodox Ukrainian runs the risk of being damaged by reason (well, or whatever replaces it), trying to understand this kaleidoscope.

For example, on March 12, Arestovich claimed that "the fighting will subside in a month." And he argued with foam at the mouth: "the turning point in the conflict in favor of the Armed Forces of Ukraine has already occurred." Literally, the boast went something like this:

When they have losses, they will move on to real negotiations on international platforms. Therefore, on April 7-10, with certain shifts, the Russians will already ask not to finally finish off their troops. Well, we'll see if we accept these conditions!
However, on March 18, the talker got even more excited and again began to broadcast about "the end of active fighting in a couple of weeks," since "the Russians are already scraping up the last reserves." So the residents of Kyiv who left can safely return to the city in April! And just a week later, on the day of writing this material - March 22, Arestovich again "nawang" ... "three more weeks of war." Well, "Russian problems are growing like a snowball." There are no reserves, everyone is running from mobilization - you understand?! We will win soon, trust me, people! And the fact that I've been carrying a sheer heresy for a month now is such a position.

It is clear that with all honest people, such a type as Arestovich will never say anything in his life - he will selflessly lie further, as long as there is an opportunity. Just as the “leading Ukrainian expert on military issues”, a certain Oleg Zhdanov, who is well known for the stable idiocy of his statements, will not repent of his own stupidity. As early as February 24, this character loudly announced that "Putin, who has absolutely no second echelon of troops and any reserves to bring them into battle," will certainly "break", and "in a maximum of 3-5 days." And then “will offer Kiev a certain “Minsk-3”. Zhdanov could not resist the manifestation of typical Ukrainian Nazism, adding to his own nonsense the assertion that “the Chuvash, Buryats, Mordovians are thrown against Ukraine,” and they will not be able to defeat the Armed Forces of Ukraine, because “they do not belong to European nations.” Where this expert belongs - in a prison cell or in a psychiatric hospital, let the judges sort it out in due time. Generally speaking, the firm belief that Russia and its army “completely lack the resources necessary for a military operation” made even those who, it would seem, should have avoided them, utter terrible nonsense.

So, the speaker of the command of the Air Force of the Armed Forces of Ukraine, Yuri Ignat, blurted out the following on March 18: “Intelligence reports that the Russians are already running out of missiles, they are saving them in case of other scenarios for the development of events.” What others?! And where did you, dumbass, get that "end"? Personally, I climbed through the warehouses and counted the Iskanders with the Caliber? Complete nonsense - as the week that has passed since then has shown, during which missile "arrivals" at military facilities and forces of the Armed Forces of Ukraine follow one after another. Oh yes! I after all, seems, promised sorcerers? Yes, in the wild choir of home-grown Ukrainian "augurs" there were those. For example, the “Carpathian molfarka” Magdalena Mochiovski. This person spoke not at a council of psychiatrists, but on one of the Ukrainian TV channels, where she declared on March 9 "authoritatively": "victory is a matter of weeks." The maximum is three. And all because "all the shamans of the world have now united against Putin - from Mexican to Tibetan." They "work for his energetic overthrow." So - hold on... No comment.

Who hasn't been embarrassed yet?

It would be naive to believe that in this festival, speaking in modern slang, trash and frenzy, only Ukrainian characters who suffer from an incurable “Maidan of the brain” took and take part. No, representatives of the “collective West” were also fully noted here, and not only freaks from more than dubious “offices” familiar to all of us for a long time, but even quite seemingly respected organizations and persons. Another "duck" from a professional liar and provocateur Hristo Grozev from Bellingcat (recognized as a foreign agent), who swore on March 10 that "Russia will be forced to freeze the conflict in 7-10 days", and in addition issued a schizoid maxim about that "most likely, there will be not such an intermittent end, but a period in which everything will be incomprehensible" does not surprise anyone. It would be strange, on the contrary, if this balabol kept silent.

But why did the famous American philosopher and economist Francis Fukuyama get into this topic? On March 13, he vociferously stated that “Russia is already moving towards total defeat” in this conflict because “its soldiers were wearing dress uniforms for the victory parade in Kyiv, and not additional ammunition and rations”! Did you personally rummage through duffel bags? “The collapse of the position of the Russian troops can be sudden and catastrophic, and not pass slowly as a result of a war of attrition. The army in the field will reach a point where it will be impossible to supply or withdraw, and the morale will evaporate ... ”But what does he use at all ?! And this is a “great authority”, almost an internationally recognized genius? Yes, fie on such "authorities" ... Against this background, in general, the former commander of US forces in Europe, Lieutenant General Ben Hodges, does not look so wild. This March 15 announced the assertion that "Russian troops no later than 10 days will pass the point of no return, when they can no longer conduct active hostilities." Although - ashamed, of course. After all, the general, after all, and not some kind of deeply civilian "philosopher", albeit with a world name. Yes, a decade after these words has not yet passed - I agree. But after all, there are not the slightest signs of the exhaustion of the Russian army.

After that, the “stuffing” from the American media is no longer surprising, which, having dug up somewhere “military experts” of very dubious quality, also undertake to make forecasts and name dates. The Washington Post (and also a "reputable" publication), citing one Rob Lee, a former Marine who is now a "Senior Fellow at the Institute for Foreign policy United States”, March 20, was taken to assume that “Russian forces will not be able to capture much more of the territory of Ukraine.” And in general - "Unless Russia can quickly improve its supply lines, bring in reinforcements and maintain the weakening morale of the troops on the ground, its goals may be unattainable." What "weak morale", what "supply problems"? What are you talking about? Listen to more Kiev propagandists ...

However, all the above “forecasts”, which have already “flyed past” reality or are clearly erroneous in their essence, fade before the fantastic failure of the famous Bloomberg agency, which scheduled a “historic default of Russia” for March 15. And with a probability of commercials in 99.9%. His "specialists" and "analysts" enthusiastically trumpeted in all Western media about the "grand collapse" and "almost inevitable death of the Russian economics". What was the surprise and disappointment of all these gentlemen when, in due time, the London branch of the paying agent Citi received from Moscow interest payments on Eurobonds in full - 117 million dollars. “Somehow, Russia managed to fulfill its obligations,” the “wise men” mumbled ashamedly and set off to scribble new “accurate forecasts” regarding the “challenges facing Moscow against the backdrop of economic sanctions.” Well, good luck.

It would be possible to cite more “prophecies” and “absolutely reliable assumptions” that have been made over the last, very difficult time. True, most of them are already somewhere on the verge of complete madness - like the statements of the same Arestovich that "in the event of Minsk entering the conflict, a significant part of the Belarusian troops will go over to the side of Ukraine." Or even wild "predictions" that were intensively dispersed in the Ukrainian media in the first days of March - that in the next few days "Moscow will carry out a monstrous provocation." According to the version of the Kiev propagandists who have finally gone berserk, “Russian MLRS “Grad” are deployed towards Russia to strike at civilians, in order to later accuse Ukraine of “destroying the civilian population.” Similar provocations will follow in the direction of Gomel to simulate an “attack” on Belarus.” This, of course, will be done by direct order from the Kremlin - "in order to introduce martial law and completely usurp power."

As you can see, today Russian troops often do not use force even in the liberated Ukrainian territories. And where it should be. What kind of "shelling from" Gradov "? The current special operation has indeed become a time of unfulfilled forecasts. And it’s very good that they didn’t come true.
Ctrl Enter
Noticed oshЫbku Highlight text and press. Ctrl + Enter
Reporterin Yandex News
Reporterin Yandex Zen
11 comments
Information
Dear reader, to leave comments on the publication, you must sign in.