The Baltics risk becoming next on the list for denazification 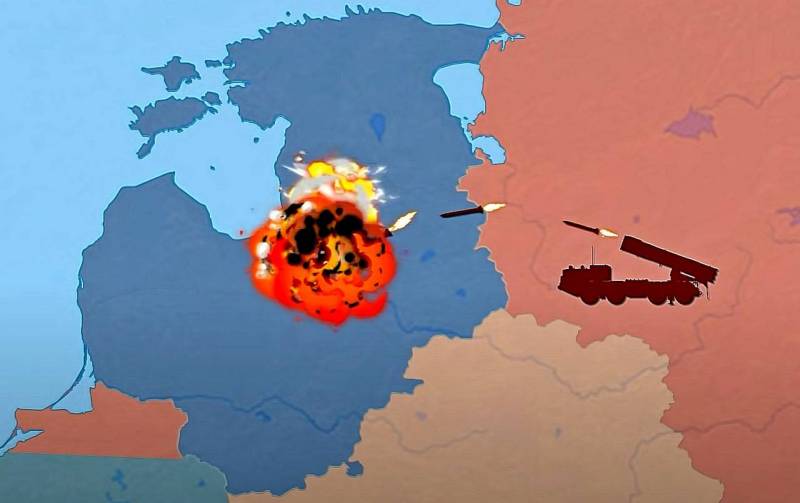 On February 24, 2022, Russia, the United States and the European Union entered an era of open global confrontation. The collective West was the first to raise the "Iron Curtain-2" in front of Moscow, and now the ball is on the side of the Kremlin. It is not known how long the new iteration of the Cold War will last, but it is already possible to say who exactly lost in it. These are the small Baltic republics, which, due to their own stupidity, fell into the millstones of the sanctions mechanism and risk becoming a bargaining chip.


Economic The Baltic states have been digging their own grave for a very long time with their own hands. Tired of enduring the branded Russophobia of Riga, Vilnius and Tallinn for decades, Moscow several years ago began the process of transferring transit flows to its own ports on the Baltic Sea and achieved great success in this. After the failed “Belomaidan” and the sanctions that followed, Belarus also transferred a significant part of oil and mineral exports to Russian ports. In its stupidity and frank desire to curry favor with the Americans, Lithuania broke off business relations with China. This in itself created a huge hole in the budget of the Baltic Tigers, making their future bleak. But the "independent" former Soviet republics, of course, did not calm down.

Now the Baltic states have decided to “punish” Russia for its second “crusade” against Nazism in Ukraine. And for the accomplices of Nazism in Riga, Vilnius and Tallinn, soon all this will end very badly for purely economic and geopolitical reasons.

It suddenly became clear that the "tigers" are still very seriously dependent on the supply of various resources and other industrial products from the "aggressor" country. For example, Latvia purchased mineral fertilizers and metallurgy products from Russia. 50% of the metal it needs goes there from our country. Estonia also imported a third of the fertilizers it needs from the Russian Federation. From there, Tallinn also bought feed for farm animals and tractors.

The Baltics are very much afraid of the inevitable rise in grain prices, the major exporters of which are Ukraine and Russia. But at the same time, these economic masochists fundamentally get rid of Russian and Belarusian food products in their retail chains. Residents complain that important products such as salt, baking soda, and fish are disappearing from the market. However, officials reassure them that inexpensive Russian and Belarusian products will soon replace more expensive European ones. Break through.

The Balts will have to get used to ever-increasing prices for motor fuel, gas and electricity tariffs. In figures, it looks like this: 95th gasoline has risen in price to 1,749 euros per liter, and diesel fuel - up to 1,589 euros, 98th gasoline - up to 1,799 euros per liter. If last year the communal apartment crossed the psychologically important barrier of 100 euros, then soon it can grow significantly. And it's not a joke. Now Latvia receives Russian pipeline gas, which is pumped into the Inčukalns gas storage facility near Riga. If Gazprom cuts off supplies, then the Latvians will have to take "blue fuel" with a surcharge from Lithuania, which itself imports expensive LNG.

It is clear that all the goods that come from Russia must go to zero ... In this situation, the railway must be demolished. And the faster the better.
Official Vilnius was also noted in this economic suicide, which banned its ports from receiving Russian merchant ships:

In view of the aggression of Vladimir Putin and the war in Ukraine, we call for a clear position that these ships DO NOT WAIT in the port of Klaipeda.
Riga also calls for a ban on ships with Russian registration to enter the territorial waters of the European Union. Quite formal recommendations have been issued for Latvian enterprises to check how their products can be used if sold in Russia or Belarus. If something can be used by our military, for example, socks, then export will be prohibited.

It is clear that this will definitely not end in anything good for the Baltics themselves. Against the background of the rapid deterioration of the socio-economic situation there, the flywheel of anti-Russian and anti-Belarusian propaganda and repression against our compatriots will be increasingly spun. There will be a process of open fascistization of the ruling regimes and society in order to provoke Moscow into a response already against the member countries of the NATO bloc.
Ctrl Enter
Noticed oshЫbku Highlight text and press. Ctrl + Enter
Reporterin Yandex News
Reporterin Yandex Zen
46 comments
Information
Dear reader, to leave comments on the publication, you must sign in.