UNESCO shows Sakhalin and the Kuriles as part of Japan 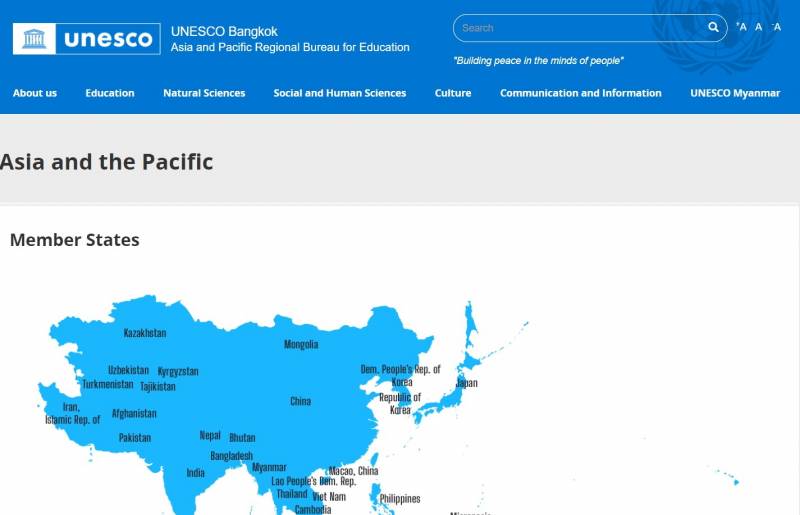 A peculiar case of "cartographic aggression" against Russia was revealed the day before. This time, the UNESCO Bangkok Office was involved. Recall that UNESCO is the division of the United Nations dealing with education, science and culture.


On the map of the Asian region presented on the UNESCO Bangkok website, Sakhalin and the Kuril archipelago are shown in such a way that an inexperienced reader is able to admit that they belong to Japan simply because the continental part of Russia is not displayed and not signed on the presented map. Unlike the Land of the Rising Sun and other states of Asia.

The scandalous page itself is still available at the indicated link.

It is not yet clear what such a mistake is - an unfortunate mistake of the regional department of the world organization responsible for education and science, or part of the global anti-Russian hysteria, which in this case is either pro-Ukrainian or pro-Japanese, or both at once.

The Kuril Islands became part of Japan under treaties with Russia in 1855 and 1875. South Sakhalin became Japanese after the war of 1904-1905.

In August and September 1945, after the declaration of war, Soviet troops occupied these territories, dissolving the existing administration. Only during the storming of the island of Shumshu, more than five hundred Red Army soldiers were killed.

The peace treaty of 1951, signed by Japan and Western countries led by the United States, very vaguely prescribed the further ownership of South Sakhalin and the Kuriles. The Soviet Union refused to sign the document at that moment.

In 1956, a Soviet-Japanese declaration was concluded, formally ending the state of war between countries, in which the USSR agreed to the transfer of the Habomai archipelago and the island of Shikotan to Japan on the condition that "the actual transfer of these islands to Japan will be made after the conclusion of the Peace Treaty." However, subsequent negotiations came to naught after Tokyo's bid for two more islands - Kunashir and Iturup.

A number of sources indicate that US Secretary of State John Dulles pushed for the expansion of Tokyo's territorial demands, who threatened that the US would never return Okinawa and other islands of the Ryukyu archipelago to the Japanese (which again came under Japanese sovereignty only in 1972, but with the preservation of American military bases) .

In 1960, after the conclusion of a new version of the US-Japanese security treaty, the Soviet Union announced the impossibility of fulfilling the terms of the 1956 declaration on the transfer of Shikotan Island and the Habomai group of rocks.
Ctrl Enter
Noticed oshЫbku Highlight text and press. Ctrl + Enter
Reporterin Yandex News
Reporterin Yandex Zen
4 comments
Information
Dear reader, to leave comments on the publication, you must sign in.