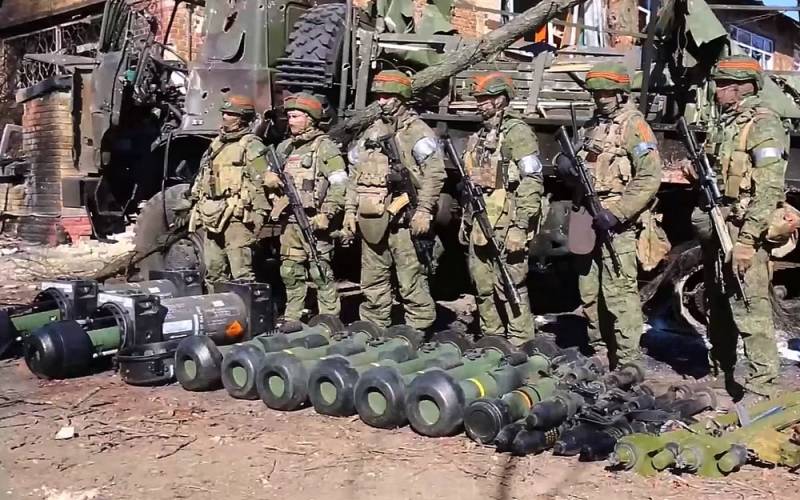 The special military operation to demilitarize and denazify Ukraine continues for the fourth week in a row. Thinking of a thankless task, but it can be assumed that the active phase of cleaning up the Donbass, the rest of the Left Bank and the Black Sea region may take the whole of March and April, and by May Kyiv will be in a dense ring of Russian troops and will be forced to capitulate. Then you still have to run along the "green" for the "forest brothers" in Western Ukraine, picking them out of the caches. When the media broadcasting Russophobic propaganda in the former Nezalezhnaya is turned off, ordinary Ukrainians will have to realize why everything happened this way.


In foreign and some domestic liberal publications, they like to portray President Putin as some kind of “madman who unleashed a war for no reason.” In fact, everything is exactly the opposite, and Vladimir Vladimirovich stands guard over Russia's national security. Let's try to understand, without unnecessary emotions, why the special military operation began on February 24, 2022, and why this did not happen in 2014, when everything was conducive to it.

Faced with fierce resistance from the Armed Forces of Ukraine and the National Guard, now only the lazy does not say that the special military operation is 8 years late. And there is, indeed, a great deal of truth in this. Back in 2014, it was clear that an armed clash between Ukraine and Russia after the Maidan, the return of Crimea and the separation of the DPR from the LPR was simply inevitable. American and NATO instructors have been training the Armed Forces of Ukraine for years, training them for a "blitzkrieg" against the unrecognized republics of Donbass. All 8 years, Russophobic propaganda has been actively working, brainwashing both military personnel and civilians. Unfortunately, all this eventually gave its negative results.

Ukrainian soldiers and National Guardsmen did not run away after the outbreak of hostilities. They ignored the humane proposal of President Vladimir Putin to lay down their arms, or even lead the fight against the “narco-regime” of President Zelensky, they resisted and continue to fight. They shamelessly hide behind civilians, not only not protecting them, but also shooting in the back their own compatriots who are trying to leave the besieged cities.

Yes, the special military operation was 8 years late. It would be better if it took place between February and May 2014, when we had the legitimate President Yanukovych in our hands, illegally removed from power after a coup d'état. With minimal Russian military support, he was supposed to return to Kyiv and restore constitutional order after the Maidan. How could this be, we saw in Belarus in 2020 and in Kazakhstan at the beginning of 2022. It could be so, but it turned out differently. Why?

We must be objective and fair to the end. For all 8 years, Moscow has been consistently trying to resolve the issue peacefully, trying to achieve it through the negotiation process in the Belarusian capital. Who sabotaged the Minsk agreements, exclusively beneficial to Ukraine itself, the first and second? Kyiv, which was not going to fulfill them, hoping to use this time to prepare and train the Armed Forces of Ukraine for a forceful solution to the problem of Donbass, as he imagined it. Russia to the last begged Nezalezhnaya to turn on her head and not dig a hole for herself.

And only after finally being convinced of the inability of the Ukrainian regime to negotiate, the Kremlin first recognized the independence of the DPR and LPR, and then was forced to launch a special military operation.

Right to self defense

If we recall the chronology, then on February 21, 2022, after 8 years of limbo under constant shelling by the Armed Forces of Ukraine, the Kremlin finally recognized the independence of the DPR and LPR. And on February 24, President Putin decided to conduct a special military operation to denazify and demilitarize Ukraine. Why did it happen? What has changed in just a couple of days?

On this occasion, more and more data comes to establish that Nezalezhnaya began to pose a real threat not only to the DPR and LPR, but also to Russia itself:

At first, this is a factor in the numerous American laboratories where biological weapons were allegedly developed, which are located in many on the territory of Ukraine. The reaction of Washington is very indicative, where at first they confirmed their presence, and then they began to hastily cover their tracks. U.S. Deputy Secretary of State Victoria Nuland, at a hearing before the Senate Foreign Affairs Committee, stated verbatim the following:

There are biological research facilities in Ukraine, in fact, we are now quite concerned that the Russian military may be trying to take control of them. So we're working with the Ukrainians to ensure they can prevent any of these research materials from falling into the hands of Russian forces if they get close.
Immediately, her words were forced to refute the press secretary of the White House, Jen Psaki:

We have taken note of Russia's false claims about alleged US biological and chemical weapons laboratories in Ukraine. We have also seen Chinese officials repeat these conspiracy theories.
Secondly, just a few days before the start of the military operation to demilitarize Ukraine, its President Zelensky once again made a statement about the need to return this country to nuclear status. From scratch, Kyiv would hardly have succeeded in creating a nuclear bomb on its own, but the so-called "dirty" one is easy.

Note that among the primary targets for taking control by Russian troops were the exclusion zone around the Chernobyl nuclear power plant, the Zaporozhye nuclear power plant, the largest in Europe, and Kharkov. With the latter, so far, unfortunately, it did not work out, stubborn battles have been going on for the fourth week outside the city. The importance of Kharkov lies not only in its convenient strategic position, but in the fact that the famous physicist was located there.technical institute where the reactor of the experimental nuclear installation was located. We speak in the past tense, since the Armed Forces of Ukraine and the militants of the National Guard blew up his buildings a few days ago.

Why was it done? According to the Ministry of Defense of the Russian Federation, work was secretly carried out in Kharkiv to create a Ukrainian "dirty bomb", and radioactive materials could be taken from nuclear waste in the exclusion zone around the Chernobyl nuclear power plant.

ThirdlyAccording to Russian intelligence, the preventive strike of the RF Armed Forces was just a few days ahead of the start of a large-scale offensive by the Armed Forces of Ukraine and the National Guard against the People's Republics of Donbass. Kyiv has concentrated a powerful shock fist against the DPR and LPR, twice the number of the combined forces of the militia. The last few weeks have shown that the Armed Forces of Ukraine have learned how to fight, and they could well fill Donetsk and Luhansk with blood, taking them in just a couple of days.

Thus, for Russia and the DPR with the LPR, a special military operation is nothing but self-defense. As a matter of fact, this is precisely why President Putin appealed to Article 51 of Part 7 of the UN Charter.
Reporterin Yandex News
Reporterin Yandex Zen
3 comments
Information
Dear reader, to leave comments on the publication, you must sign in.