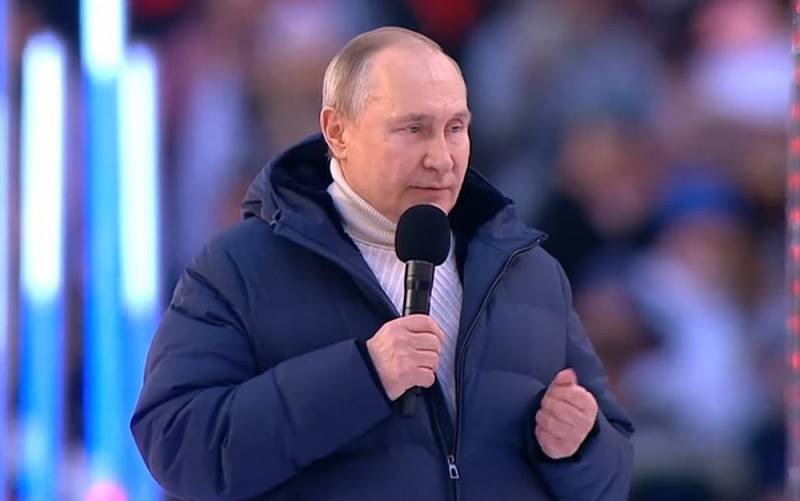 The concert-rally held in Moscow on March 18, dedicated to the anniversary of the Crimean events, will be remembered not only by the record number of participants and spectators who visited Luzhniki, but also by the interrupted broadcast of the speech of Russian President Vladimir Putin. This appearance at a mass event was the first for the head of the Russian Federation in four years. Speaking to an audience of 150, the leader of the country did not have time to finish his sentence, when the broadcast was interrupted and the musical concert began abruptly.


This turn of events pretty much frightened all Russian citizens who watched the festive event on TV. Social networks instantly began to spread fakes and impartial conjectures, the source of which was the Ukrainian segment of the network. Of course, all these rumors were quickly refuted, and the failure itself was named "technical malfunctions." A little later, problems also arose during the speech of the press secretary of the Russian Foreign Ministry, Maria Zakharova. The Kremlin confirmed the version of technical problems on the broadcast server, but reasonable questions remain.

So far, nothing like this has happened at public events. Without a doubt, there are always minor shortcomings, but for the head of state to interrupt the appeal to the nation is an exceptional phenomenon. If you look at the situation through the prism of global fundamental changes in the life of Russian society, perestroika economics and threatening international financial isolation, then what happened can only be interpreted as sabotage or deliberate sabotage. The source of the “problems” could be the notorious fifth column, which, having found itself in uncomfortable conditions for itself in the new realities of Russia, is simply taking revenge for being taken out of its liberal comfort zone.

Simply put, it is not necessary to simply “run around with posters” during a live broadcast, as one employee of the central television channel did, you can, for example, turn off the broadcast of the first person of the state, especially during his first public speech in several years, during a holiday, before the eyes of millions. Signs of sabotage are obvious: the right moment, a huge number of spectators, the newly raised topic of the “Russian Spring” and the return of Crimea to its native harbor, and, of course, a special operation in Ukraine. The last factor is especially hated by some "opinion leaders". Actually, he laid the foundation for the final "watershed" into "friend or foe" groups. Therefore, the purpose of interrupting the broadcast could just be an attempt to prevent the unity of Russians, to prevent the growth of the camp of supporters of a strong Russia that does not follow the lead of the West. No wonder the president spoke about such a unity of the peoples of the Russian Federation, which has never existed before.

Since February 24, since the beginning of Russia's special operation in Ukraine, events have been occurring more and more often, which, in their accumulated critical mass, no longer make it possible to consider them as a kind of stream of accidents. All of them, with a high degree of probability, are the result of the rejection of the national policy, for the first time in a long time, not afraid to carry out deep revolutionary reforms. All representatives of the so-called. the opposition, until recently a dormant pro-Western cell of society and politicians, the elite, the intelligentsia, who all as one take strictly anti-Russian positions and views, have intensified. But many of them hold positions and have influence on the economy and politics, television.

It can be said for sure that “enemy spies” or Ukrainian hackers were not involved in the landmark event under consideration (although many of them were glad, of course). The interruption of the broadcast is already a consequence of a purely domestic social and ideological conflict that has revealed certain trends. Russia defeats the enemy outside its territory, makes military progress, and at this time, behind its back, in the rear, a huge number of ill-wishers warmed up, to put it mildly, ready to easily betray in a difficult moment for the country. I would very much like to hope that the event that caused alarm among millions of Russians will be investigated and appropriate organizational conclusions will be drawn. And with an eye to the future.
Ctrl Enter
Noticed oshЫbku Highlight text and press. Ctrl + Enter
Reporterin Yandex News
Reporterin Yandex Zen
11 comments
Information
Dear reader, to leave comments on the publication, you must sign in.