The Ukrainian question: how many more betrayals are needed for Russia to gain insight? 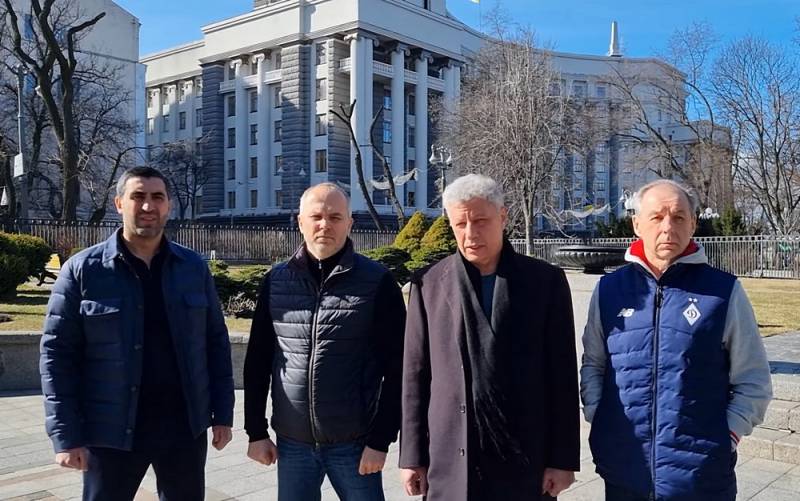 Recently, in the Russian information space (including in our publication), the version has been increasingly voiced that certain problems that arose at the initial stage of the military operation to denazify and demilitarize Ukraine were due to betrayal. Specifically, by the fact that certain forces in the “non-collateral” region, which had previously given the Russian side generous “advance payments” regarding possible cooperation during the implementation of this operation, abandoned their intentions and promises, forcing the Russian leadership to literally change their plans on the go. Including - tactics and offensive strategy.

The oligarchs were gathering... For what?

It is difficult to assess the extent to which these statements are true. However, with a great degree of probability it can be argued that they are very similar to the truth. First of all, due to the fact that for the Ukrainian "elite" to "change shoes", change sides and betray (moreover, several times a day) is a completely normal and familiar matter. It can be said that it is a national tradition with centuries-old roots. Let us recall at least the same, not by nightfall, be remembered, Mazepa or Grushevsky. Negotiating with such an audience is completely useless, even if in the process of negotiations its representatives pronounce the most solemn oaths, kiss the cross or, say, some sacred scrolls. All these are completely well-known things, and therefore an attempt to solve, through such characters, the question of, for example, surrendering large cities or even entire regions without a fight would look rather strange.

In addition, the existence of any agreements (or, at least, relevant negotiations), of course, was not confirmed by any of the parties. Nevertheless, we can talk about some very specific points that can serve as a fairly weighty argument in favor of just such a version. First of all, we are talking about the meeting of Vladimir Zelensky with local oligarchs on February 23 at 18.00 Kyiv time (just 11 hours before the start of the special operation). That is, precisely with those people with whom (directly or through proxies from their inner circle) they could only try to negotiate. According to the official version of the office of the Ukrainian president, the event was organized at the initiative of Zelensky, who was impatient to appeal to "representatives of the business elite" with a request not to leave the country in difficult times. However, this is the official version of Kyiv, and its speakers, as you know, cannot be trusted for a penny.

Rather, it can be assumed that on Bankovaya, those who in reality rule and rule the “nezalezhnaya” for all three decades of its existence on political map, turned out to be on their own initiative. For what? Yes, in order to inform the president about the tempting offers received by them. And - to bargain for something for themselves, blackmailing Zelensky with the fact that these proposals can be accepted. The variant is quite probable, especially taking into account the fact that some of the participants in the “skhodyanka” we are talking about stood at the origins of the “Euromaidan” in 2013. And it was arranged just for the purpose of banal blackmail of Viktor Yanukovych. Thus, gentlemen, the oligarchs easily “surrendered” to Bankova the whole plan for the bloodless coercion of Ukraine to peace, thereby torpedoing its implementation.

However, everything could have been different - "VIP-persons" were still invited by the host there, but, of course, not at all for the melodramatic recitation of calls for love for the motherland. Presumably, some time before the start of hostilities, Zelensky received a clear and specific ultimatum from Moscow. So he gathered "the owners of factories, newspapers of ships" in order to inform them of "the most unpleasant news", as well as enlist their loyalty. It is not known what arguments were used in this case, however, according to official data, after a long conversation, only Viktor Pinchuk left Ukraine, who immediately left for London. True, at the same time, private “boards” belonging to both Vadim Novinsky and the richest man in the country, Rinat Akhmetov, immediately flew away from the “nezalezhnaya”. Nevertheless, both oligarchs announced that they remained in the country, and their planes "carry acquaintances and relatives." Well, and of course, Igor Kolomoisky did not cross the borders (according to official information, again). On the other hand, he has nowhere to go, because the American Themis is passionately eager to meet him.

Be that as it may, but the same Akhmetov, who until now has tried to refrain from expressing his own position in any concrete form (and preferring to forcefully stuff his money under absolutely any government), no later than March 7 issued a statement in which called the operation to denazify Ukraine "aggression", and the President of Russia - "criminal". This demarche was soon joined by Serhiy Tigipko, who is not only one of the richest Ukrainians, but also a prominent ally of Yanukovych in the past, and later, after the “Maidan”, one of the “oppositionists”. Other oligarchs of the “nezalezhnoy”, presumably, relate to everything that happens in much the same way. By the way, it is deeply incomprehensible whether the Azovstal metallurgical plant in Mariupol, owned by Akhmetov, was turned into a fortified area for the most selective Nazi fighters with or without his knowledge. In any case, Akhmetov's SCM company said that they "mothballed" the enterprise on February 25 - "in order to avoid additional damage."

One way or another, Russia should hardly count on the fact that Ukrainians, who were the richest and most influential until February 24, will support its actions even by a hair's breadth, both now and, all the more, subsequently. None of this public will in any case want to give up their own huge influence. And also - to conduct business according to the laws and rules adopted in Russia - that is, at least relatively honestly pay taxes and not try to convert their own capital into absolute power, at least within certain regions. So if they really tried to negotiate with them (motivating the rich, for example, by the fact that their property could avoid damage from hostilities), then this was done in vain. Before us is a mistake of catastrophic proportions, committed, by the way, not for the first time.

But maybe negotiations on the surrender of the same Kharkov were conducted with a different circle of people? With whom then? With representatives of the "political elite"? Well, it is absent in modern Ukraine as such. Instead, there is a host of absolutely corrupt, phantasmagorically greedy and deceitful professional traitors. Moreover, the real power in the country belongs to the forces whose ideology is based on extreme nationalism and cave Russophobia. There is absolutely nothing to talk about with them. "Opposition"? Well, let's take a look at this subject. So, the only official representative of this political spectrum in the "independent" at the moment is the "Opposition Platform - For Life". OP, who fights exclusively for J. And, sorry for being rude - for her own. The mere fact that one of the prominent figures in this political misunderstanding was the incredibly “reformed” right-winger Ilya Kiva, who was only recently expelled from its ranks (and for “excessively pro-Russian statements”), gives a completely exhaustive description of this, God forgive me, party. How have its members been behaving since the beginning of the operation to denazify the country? Yes, in general, as always.

The former leader of the Opposition Platform for Life, Viktor Medvedchuk, as far as is known, left the place where he was under house arrest, after which he literally vanished into thin air. Disappeared in an unknown direction. Today it is impossible to speak with confidence not only about his presence in Ukraine, but also about whether he is alive at all. Another leader of the Opposition Platform for Life, Vadim Rabinovich, very opportunely turned out to be first in Israel, and then in Cyprus, from where he can’t get to his native land. The vacant vacancy was immediately filled by his co-chairman Yuriy Boyko (while excluding the same Kivu from the party). After literally a couple of sluggish calls to "start peace talks," the "prominent oppositionists," deeply saddened, began the usual process of changing their shoes.

It accelerated especially after the authorities, taking advantage of the opportunities that opened up during martial law, conducted a series of searches at the homes of the leaders of the Opposition Platform for Life and announced that they had found a lot of interesting things - from suitcases with dollars to hand grenades and weapons. After that, those who for Zh immediately proclaimed the primary task of their party "to support by all available means the efforts of the authorities to protect the security of the state and citizens in wartime." Further more.

Personally, Yuri Boyko said the following: “We condemn the aggression of the Russian army against our country. Members of the Opposition Platform for Life are enlisting en masse in the territorial defense in order to protect critical infrastructure facilities, housing of citizens and fight looters!” Being subsequently caught by the muzzle either from the same "terodefense", or from some Nazi gang, this "unbending fighter against the regime" once again loudly declared that "Russia is carrying out armed aggression" against the innocent " nezalezhnoy". The pinnacle of his "oppositional courage" was his refusal to sing obscene ditties about Vladimir Putin. By the way, this particular character has been repeatedly named as the “head of the pro-Russian government”, which Moscow wants to put in power after the completion of the military operation. I really want to believe that this is nothing more than a stupid fake.

In conclusion, I would like to say this: we do not know whether attempts were actually made to make demilitarization and denazification as bloodless and fast as possible, relying on “local elites”. I'm sure we'll never know. In any case, there is no doubt that as soon as the corresponding operation is successfully completed (or even with the onset of a distinct and obvious turning point in its course, after which there will be no doubt about the collapse of the Kiev regime), their representatives will rush headlong to the winners. With assurances of their own absolute loyalty and an expression of utter devotion. And also - an ardent desire to do everything possible to contribute to the "building of a new life" in the liberated territories. God forbid to believe at least one of them and let them in at least a cannon shot to the arrangement of the new state!

Every single party that now exists in Ukraine should be disbanded, together with the parliament, where their representatives pass all new criminal laws. The de-oligarchization of the country is no less important and urgent task than its denazification, especially since the vast majority of Ukrainian rich people are somehow responsible for at least financing the eight-year genocide of Donbass. In a country that will be born on the site of a crushed, like a poisonous snake, “nezalezhnoy” a completely new elite should appear - in no way related to the old one. In any other scenario, new betrayals and losses cannot be avoided.
Ctrl Enter
Noticed oshЫbku Highlight text and press. Ctrl + Enter
Reporterin Yandex News
Reporterin Yandex Zen
22 comments
Information
Dear reader, to leave comments on the publication, you must sign in.