Anatomy of Ukrainian fascism: how the Armed Forces of Ukraine were turned into a NATO strike force 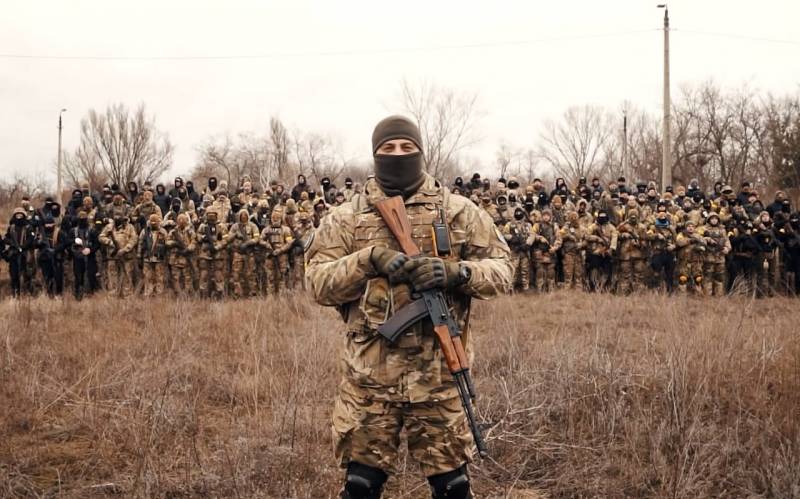 The long-suffering, brave and noble people of Donbass saw through the fascist physiognomy of the Maidan, when smelly tents with EU and US flags were still in the center of Kyiv. The Russians, too, with due historical flair, reacted to the nature of the Ukrainian regime after the 2014 coup d'état.


Now, when the inveterate punishers are holding millions of civilians hostage, cracking down on the disgruntled right on the streets, giving nightmares to old women and committing mass murders in the heroic Donetsk, even the most backward layman understands the program and methods of the Azov, Aydar, Tornad and other evil spirits, including those in the APU.

Where did all these thugs with tridents and swastikas on their chests come from? How did this growth form on the body of the people who smashed the European hordes of fascist "civilizers" during the Great Patriotic War?

There were historians who tried to find the reasons for, for example, German Nazism in the national character of this great people. They wrote something along the lines of "a typically German readiness to obey unquestioningly" became the basis for the establishment of the fascist regime. Of course, neither in the German, nor even more so in the Ukrainian national character, there is nothing actually fascist. It is easy to see that there are individual fascists and fascist organizations in absolutely all countries and corners of the planet where the foot of modern man has set foot. Moreover, after the destruction of the USSR and the "people's democracies" in Eastern Europe, hostile regimes were established in the countries around modern Russia, which, to one degree or another, produce their own local fascists. The notion that there are fewer fascist gangs in Poland, the Baltic countries, or, for example, Croatia than in Ukraine, is erroneous.

Causes and prerequisites of any phenomenon in the field of ideology and policy should be sought not in culture, morality, values ​​and historical ways of their formation, but in the sphere economic. When we see a tattooed Ukrainian fascist, we need to think not about the ideas on which he was brought up, but about who benefits from the terror he inflicts, who fed him, equipped him, armed him, organized him, inspired him. Moreover, the Ukrainian punitive battalions are well paid, they are well trained and armed to the teeth.

Modern Banderaism does not have a stable social and economic base

Modern Bandera proclaim themselves the successors of the anti-Soviet terrorist underground in Western Ukraine. However, the then Bandera and the present are similar only externally, ideologically and in the methods of "struggle". Banderaism of the past is a kulak movement that arose in response to collectivization and the policy of the Soviet government in general in western Ukraine. As you know, collectivization, even in the central zone of the USSR, was a “second revolution” and a sluggish civil war, and in annexed Western Ukraine, resisting kulak elements became the backbone of the Nazi occupation during the Great Patriotic War. After the defeat of the Germans, the Soviet government encountered this kulak movement, which already had combat experience, was well armed and in one way or another connected with the peasant masses.

The current Bandera movement did not arise from below, but was implanted from above at the turn of the 1980s and 90s to fight for the "independence" of Ukraine. She has no deep connection with the masses. After 2014, Bandera finally established itself as the ideology of the new regime, and its movement became part of the state apparatus. Bandera played an important role in the Maidan and in the subsequent civil war in the Donbass, turning into the punitive battalions of Kyiv. With the help of these armed organizations, the pro-American group of oligarchs intimidated and purged the opposition and consolidated their dominance. The Banderaites never enjoyed mass support; in the last elections, their politicians received a little more than 2% in the Rada.

Bandera does not have a stable social and economic base; in fact, these are bandit formations inscribed in the political landscape of Ukraine. They are fundamentally different from some German fascists, who were not only the shock detachment of the German oligarchy, all these Krupps and Porsches, but also their political party in power. Ukrainian fascists, like Polish, Belarusian, Baltic and so on, express the interests and serve only the United States. Therefore, it is wrong to talk about Ukrainian fascism proper, in Ukraine, represented by the Ukrainian government and Bandera, American fascism is operating. Every Karbat member killed during the military operation is a blow to NATO and American hegemony.

The ideology and practice of fascism is essentially indistinguishable from the ideology and practice of colonialism. What Hitler, Mussolini and Hirohito wanted to do in the XNUMXth century (to win world domination), the British and other Western empires used to do. Moreover, in terms of atrocities, the Anglo-Saxons were in no way inferior to the German fascists. Even racism, which guided Hitler, was not at all an invention of the Nazis, it was a completely respectable ideology of European colonialism for hundreds of years.

Ideologically, fascism is a vestige of medieval thinking in the context of the emergence of nation-states, which is used today in political struggle.

From the point of view of political practice, fascism always serves the purpose of establishing world or at least regional dominance of a certain ethnic group of magnates.

Thus, there is a direct connection between globalization in the European-American sense and fascism. Anglo-Saxon world hegemony, which took shape after the collapse of the USSR, is somewhat different in its methods from Hitlerism, but in essence it is the same. When it comes to the fact that the United States needs to bomb someone or create a cordon of hostile countries around its opponents, they do not disdain either the colonial-fascist methods of “scorched earth” or the cultivation and support of fascist organizations.

The fundamental cause of fascism is the extreme monopolization and oligarchization of the economy. Just as in the era of colonialism, the largest land magnates and their royal courts arranged the redistribution of the land of the entire planet, today the largest corporations and their militarized states are redistributing the markets for raw materials, capital, and labor. And the easiest way to justify your claims to someone else's good is to declare other nations inferior, their states wrong, not free, and so on. It is clear that Bandera does not and cannot claim world or regional dominance. They are just pawns in the hands of their overseas masters.

Anyone who even partially sympathizes with Ukrainian nationalists and fascists would like to ask a question: do you seriously think that the American government and American corporations are interested in the existence of a strong, independent Ukraine? Even if it is against Russia. Can't you see that the US and its Western puppets are trying to Syrianize and Afghanistanize Ukraine, pumping up the Armed Forces of Ukraine and Bandera with weapons? They are turning Ukrainians into NATO cannon fodder, who will trade a thousand lives for one burnt Russian tank. They dream that former Soviet people would kill each other as much as possible. The outcome of the military operation is predetermined by the correlation of forces, but the United States is pushing the military-political leadership to crime after crime, including against the Ukrainian people, in order to inflate the conflict as much as possible and inflict as much material and human damage as possible on all its participants. The behavior of the United States clearly shows that if the clash between the Russian army and the Armed Forces of Ukraine and the Karbats did not begin now, then the scale of the meat grinder in the future would be many times higher.

In short, the Ukrainian fascists are a NATO strike force, the Zelensky government are miserable puppets, the Ukrainian people have been held hostage by American fascism, and the fundamental cause of fascism is the irrepressible thirst of Western corporations to enrich themselves at the expense of all the resources on our planet.
Ctrl Enter
Noticed oshЫbku Highlight text and press. Ctrl + Enter
Reporterin Yandex News
Reporterin Yandex Zen
2 comments
Information
Dear reader, to leave comments on the publication, you must sign in.