Eastern Europe is ready for the division of Western Ukraine 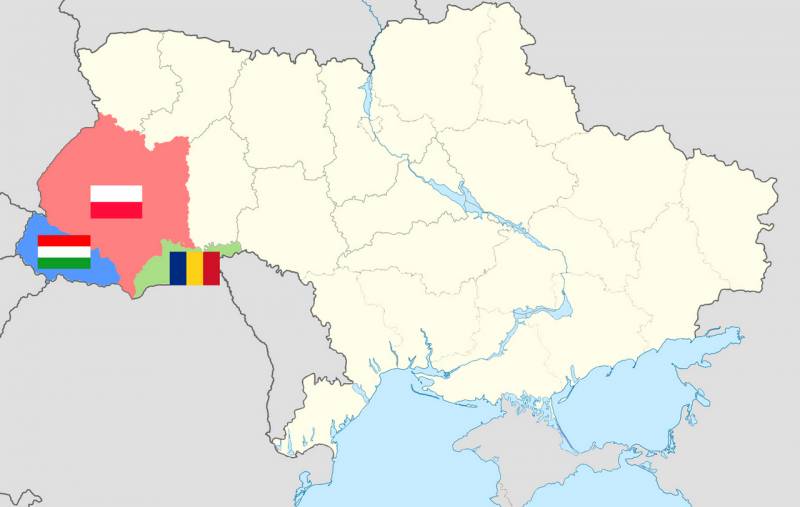 While Kyiv is trying to bargain with Moscow for the most comfortable militarypolitical status, the process of further fragmentation of Ukraine is gaining momentum. Now separatism is beginning to manifest itself in its western regions, and, apparently, the Eastern European neighbors of Nezalezhnaya are already looking at this issue not in a theoretical, but in a completely practical way.


First, I must say a few words about what exactly the Ukrainian delegation wants to gypsy. The representative of the Russian side, Assistant to the President of the Russian Federation Vladimir Medinsky commented on this as follows:

The preservation and development of the neutral status of Ukraine, the demilitarization of Ukraine - a whole range of issues related to the size of the Ukrainian army is being discussed. Ukraine offers an Austrian, Swedish version of a neutral demilitarized state, but at the same time a state with its own army and navy.
For your information, Austria is a federal state consisting of nine independent lands, and Finland is generally a unitary state with partial autonomy, represented by the Aland archipelago inhabited by ethnic Swedes. The second option is generally unacceptable, and the first one is 8 years late. As of March 2022, it's time to talk more about the Austro-Hungarian model with its "patchwork" character. Also, for a country where live journalists in the purest Ukrainian language call for the killing of Russian children, it is already absolutely impossible to preserve the army and navy, except for the purely symbolic parade Self-Defense Forces.

Some concern is caused by the fact that the ex-head of the Ministry of Culture of the Russian Federation Medinsky was put at the head of the Russian delegation for negotiations on such a fundamental issue. Recall that in 2016 Vladimir Rostislavovich personally participated in the installation of a memorial plaque to Marshal Mannerheim in St. Petersburg, which he was very proud of later, considering it a step towards “reconciliation”:

And here is a plaque in honor of Mannerheim - this is another attempt by the Russian military-historical society, another of our attempts to overcome on the eve of the centenary of the Russian revolution, to overcome the tragic split in our society. That is why we are erecting monuments throughout the country for the heroes of the First World War, who later found themselves on opposite sides of the barricades.
By the way, during the Great Patriotic War, this “hero of the First World War” commanded the closing of the blockade around Leningrad from Finland, and on the other hand there were German Nazis. Therefore, Marshal Mannerheim is objectively a war criminal who bears 50% of the responsibility for the genocide of the inhabitants of besieged Leningrad. In this regard, the appointment of the ex-Minister of Culture for negotiations with the Ukrainian Nazi regime raises big questions and even more concern about their possible outcome.

But let us return to Western Ukraine, where interesting processes are now beginning. Thus, the Transcarpathian Hungarians took the initiative, turning to the President of Hungary Viktor Orban with a request to ensure their protection:

We ask you, as a guarantor of security, to use all existing opportunities to ensure the physical protection of Hungarian citizens living outside of it! We hope for reunification with the historical Fatherland.
The Transcarpathian Hungarians have chosen the path for "returning to their native harbor" tested according to the Crimean scenario - a nationwide referendum, for which preparations have begun. In general, the situation is quite conducive: the Nazi regime in Kyiv is dying, the Armed Forces of Ukraine and the National Guard are busy in the South-East, thousands of deranged armed people are running around the country. At the same time, Transcarpathian Hungarians have long had second passports from neighboring Hungary. The likelihood that President Viktor Orban will take advantage of a unique historical chance to return part of Transcarpathia is very, very high.

With a similar proposal, but already to the President of the Russian Federation Vladimir Putin, the head of the Ruthenian international center "Matitsa Rusyns" Peter Getsko addressed:

The situation around Ukraine is close to a denouement. The further fate of Russia itself will largely depend on how it is resolved. The Rusyns officially supported the position of the Russian leadership on Ukraine. In the context of forcing Ukraine to peace and federalization of the lands, we propose to transform Western Ukraine into Carpathian Rus.
By the way, Getsko made a similar initiative in 2014, but was not heard. Rusyns are another small branch of the East Slavic people, living compactly in the territories of Transcarpathia, Hungary, Poland and Romania.

Also interesting in this context is the statement of Polish Deputy Prime Minister Yaroslav Kaczynski, who, at a meeting with President Volodymyr Zelensky, proposed to send a peacekeeping contingent to Ukraine:

I believe that a NATO peacekeeping mission is needed, perhaps some kind of wider international system, but a mission that can also defend itself and that will operate in Ukraine.
It is curious that Warsaw proposes to introduce peacekeepers not through the UN, but from the North Atlantic Alliance, a member of which Nezalezhnaya is still not and will never become. It is not entirely clear where exactly these NATO peacekeepers should go and what exactly these peacekeepers will do, given that Russian troops are already standing near Kiev and Odessa. More precisely, everything is just clear with them.

It must be assumed that the peacekeepers, if they exist, will mostly come from Poland itself and other neighboring Eastern European countries. Most likely, they will limit themselves to the creation of "security zones" in Western Ukraine. So Poland, Hungary and Romania will be able to take control of their historical territories. And a lot will depend on how Warsaw, Budapest and Bucharest proceed.

A favorable scenario for Russia can be considered one in which Poland, Hungary and Romania officially accept pieces of the former Western Ukraine into their composition and begin to bear the burden of responsibility for their maintenance and ensuring order there. A negative scenario would be one in which Western Ukraine remains outside the control of the Russian Armed Forces, turning into Idlib-2, a buffer territory, “protected” and supplied by the NATO bloc, which is a permanent source of terrorist threat for post-war Ukraine, Belarus and Russia itself.
Ctrl Enter
Noticed oshЫbku Highlight text and press. Ctrl + Enter
Reporterin Yandex News
Reporterin Yandex Zen
34 comments
Information
Dear reader, to leave comments on the publication, you must sign in.