Mercenaries vs Volunteers: Why Kyiv's bet on the "Foreign Legion" did not work 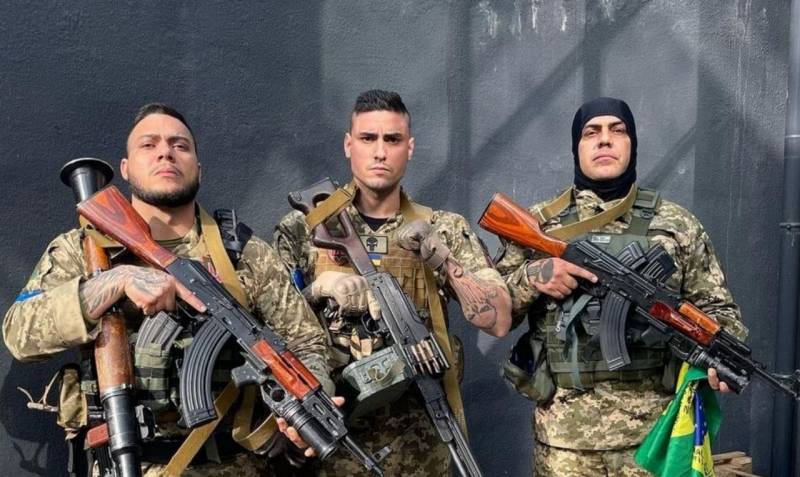 One of the most significant trends around the armed conflict in Ukraine can be considered its internationalization on both sides. Ukraine tried to create its own "Foreign Legion", assembled from the Nazi rabble, mainly from Western countries. Russia is ready to attract volunteer contingents from friendly countries in the Middle East. And already now we can conclude that Kyiv's stake turned out to be beaten in every sense of the word. What gives grounds for believing so?

The fact that President Vladimir Putin supported the initiative of the Minister of Defense of the Russian Federation Shoigu to attract volunteers from the countries of the Middle East to the operation to demilitarize and denazify Ukraine, we told previously. According to Sergei Kuzhugetovich, at least 16 thousand fighters are ready to come and join the battle:

We receive a huge number of applications from all sorts of volunteers from different countries who would like to come to the Luhansk and Donetsk People's Republics in order to participate in what they consider to be the liberation movement.
This decision raised a lot of questions. Are 16 armed Arabs against the backdrop of the 200-strong Russian contingent involved in a special operation, a lot or a little? For what specific purposes can volunteers from the countries of the Middle East be used? And, finally, why are the Russian Defense Ministry happy to see foreigners speaking a foreign language in the steppes of Ukraine, while their volunteers, from somewhere in the Russian or Belarusian outback, are not yet needed there?

The questions are correct, but they have quite logical answers.

At first, there is an opinion that the General Staff of the Russian Federation made a number of mistakes when planning this special military operation. Allegedly, they greatly underestimated the combat effectiveness and motivation of the Armed Forces of Ukraine, and also overestimated the mood of the local population, based on the realities of 2014. In fact, judging by the fact that the Russian Armed Forces avoid taking large cities, the General Staff knew for sure in advance that there would be no meeting with flowers. An easy walk, alas, does not work, you have to fight for real, the battles are positional and very fierce. Additional forces are needed to control the liberated vast territory.

Secondly, these forces should not be anyhow, but regular. If you simply gather motivated people and send them to the front, then it will not end well for them. We'll talk more about this later. For combat coordination, according to the rules, you need to spend at least 40 days, and the entire military operation in Ukraine still does not go that long. That is why volunteers from Russia are not yet in demand there, but the military contingents from the SAR will just be in place. They underwent full-fledged military training and coordination under the guidance of Russian specialists, gained real combat experience in the fight against terrorists in similar conditions of urban battles. These are trained, disciplined people who know exactly what is required of them.

Thirdly, it is from foreign military experts that there may be more use in conducting a police operation in the liberated territories. Russian troops are forced to leave in the rear the remnants of the unfinished Armed Forces of Ukraine, the National Guard and the Terodefense, which pose a real threat to our rear. In addition to them, there are also specially trained DRGs, and simply insane people with automatic weapons and Molotov cocktails. What happens when they try to take action can be seen in the scary footage from Kherson.

So, all these Ukrainian armed contingents must be securely blocked and cleared out. Where a Russian soldier shows unnecessary mercy to a soldier like himself, only from the Armed Forces of Ukraine, and receives a bullet in the back from him, the Syrian, who is used to resisting terrorists, will not stand on ceremony. All this sounds inhumane and even cruel, but such are the harsh realities that we all now face. Also, people from the Middle East will be useful in restoring order on the streets of the liberated cities. The descendants of the Assyrians will explain to the "descendants of the Sumerians" where and in what they are wrong.

A little humor to lighten the mood a bit. It's no secret that Ukraine is now much colder than Syria, so volunteers from there will not be very comfortable. Probably, it is worth dressing them in felt boots, hats with earflaps and Russian quilted jackets. To complete the image on the hand of each, tie our "Colorado" ribbon.

Trying to portray the support of the whole world, Ukraine went a different way. On February 27, Kyiv announced the formation of the so-called "Foreign Legion", which was supposed to include either volunteers or mercenaries from countries friendly to the Ukrainian Nazi regime. It was supposed to increase its number to 2,5-3 thousand people.
All these Rambos began to arrive through the territory of neighboring Poland to the Yavoriv training ground in the Lviv region, where they were supposed to undergo combat coordination. However, the Ministry of Defense of the Russian Federation promptly stopped this destructive initiative.

On March 13, 2022, a powerful missile strike was carried out against the Foreign Legion base in Western Ukraine, after which it virtually ceased to exist. The next day, March 14, another rocket attack hit the base of the nationalists in the village of Antopol in the Rivne region, where the Ukrainian nationalists were located. The result of the “calibration” of the Yavorovsky training ground was the death of 35 militants and the wounding of another 134. Immediately after this, most of the foreign mercenaries rapidly departed towards Poland. Obviously, these were just mercenaries, and not ideological volunteers, ready to lay down their lives in battles against the “Muscovites”.

In fact, this situation clearly demonstrates the difference between the two approaches to the internationalization of armed conflict. Kyiv made a bet on every rabble, which almost without exception fled after the first serious preventive strike and losses. No one will definitely provide him with any regular military contingents. Moscow is ready to bring to Ukraine well-trained, well-coordinated and disciplined units that have received real combat experience in the Syrian campaign. They will not scatter, even having received painful losses.