Moscow and Kyiv: what will the negotiations lead to? 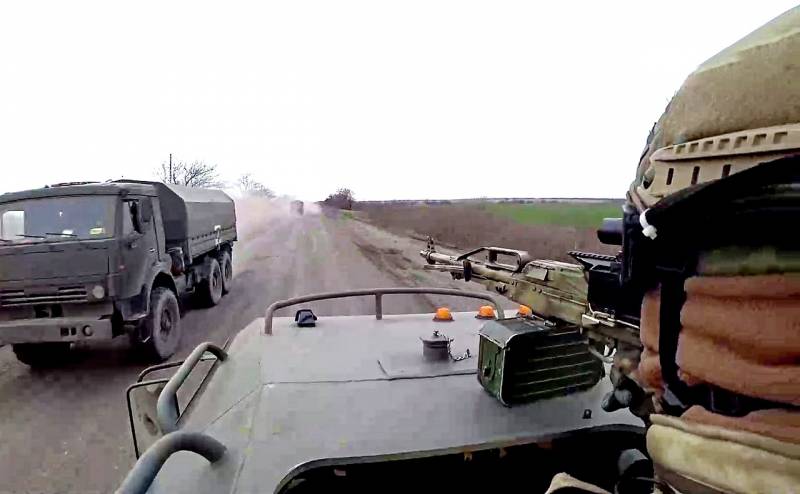 On March 14, a number of statements were made regarding the negotiation process between Ukraine and Russia. On the one hand, representatives of the current Kiev regime quite traditionally continue to talk nonsense about the fact that “the reasons for all disagreements lie in the difference political systems of the two countries. They say that in Russia there is an "ultimatum suppression of a free society", and in Ukraine - "free dialogue in society" and a solid "consensus". Yeah, especially now - when those who disagree have already begun to be shot at all without trial or investigation ...


On the other hand, the same adviser to the head of Zelensky’s office, Mikhail Podolyak, who “broadcast” the above maxim, also said something else. According to him, the negotiations "have made very significant progress." Allegedly, “consultation processes have already been completed” and the matter remains for a small thing - clarification from a legal point of view of “separate definitions” that will “form” into a certain “final document”. It will be signed by none other than the presidents of the two countries - Vladimir Putin and Vladimir Zelensky. It must be said that this version is confirmed to a certain extent by the appearance of the Ukrainian Minister of Justice Denis Malyuska in the Ukrainian delegation. Is it really “a matter of ointment”: it remains only to “settle down” the details of the wording - and peace will be concluded? Let's try to figure out whether this is possible in principle, and, most importantly, whether it is necessary for both Russia and Ukraine.

Will the "Jerusalem peace" be "obscene" than the Brest one?

The most interesting thing is that the statements of one of the participants in the Russian negotiating group, State Duma deputy Leonid Slutsky, are almost in unison with the rantings of Podolyaka. It was he who expressed the opinion that there is "significant progress" in the negotiations. So weighty that, according to the deputy, "it can develop into a common position of the parties and documents for signing." Which documents?! About what? What is the “common position” that inspired the representatives of the two opposing sides so much? On what points did they manage to find common ground?

Does Ukraine agree to demilitarization - that is, to the fact that its army and semi-gangster armed formations, of which more than ever have recently sprung up, lay down their arms and be deprived of the right to carry them, with the exception of an extremely limited contingent? Did you manage to agree on denazification? About bringing to justice all those who were behind the numerous crimes against the peoples of Donbass and Ukraine itself, and who were also their executors? And - starting from the "Maidan" in 2014 and ending with the current war? Here is something very doubtful. However, no - there can be no doubt at all. According to the same Podolyaki, “Ukraine will not concede anything significant,” her positions are “quite tough, they concern exclusively the withdrawal of troops and a ceasefire.” Moreover, Kyiv "will not give up on any position", and Russia "no longer puts ultimatums, but listens attentively." So what is really happening? Either Podolyaka is lying like a gray gelding, or we have before us a picture of preparations for the conclusion of an agreement, against which the "obscene" "Brest peace" will seem the pinnacle of diplomatic success. I really want to believe in the first option, but then what about the words of Mr. Slutsky?

Only one thing can be said with complete certainty - the Ukrainian negotiator definitely does not prevaricate, talking about the "hard positions" of Kyiv. In order to be convinced of this, it is quite enough to recall especially vivid quotes from the speeches of the main carpet maker of all Ukraine, Volodymyr Zelensky. At least in recent days. As recently as March 11, this undoubted military (and political) genius proclaimed that the "nezalezhnaya" "reached a strategic turning point in the war" and she "confidently goes to victory." Nothing more, but nothing less. This was followed by the same nauseating chewing gum of assurances that “Russia has completely exhausted its military reserves” and “will soon be finally broken by sanctions,” which, however, “are still not enough.” Well, and, of course, appeals to fellow citizens "be patient," because "all Ukrainian lands will be liberated in time." “Everything” in this context is also Crimea with the Donetsk and Lugansk Republics, if someone suddenly did not understand.

On the same day, by the way, Zelensky, not in the next “appeal to the nation” quoted above, but in the process of communicating with representatives of foreign media, issued a portion of even more delusional “Wishlist”. For example, about some “security guarantees” (from Russia, of course), which almost the whole world should provide to Ukraine. The fact that he is ready to meet with Vladimir Putin, but not otherwise than in Jerusalem, which he is busy with through Israeli Prime Minister Bennett. Well, to top it off, he again spoke about the "closing of the sky", which Kyiv now wants to implement by acquiring air defense systems and combat aircraft. On this occasion, there are allegedly already "certain agreements" - up to the point that the fighters will be provided "together with the flight crew." And, therefore, we are not talking about old MiGs at all, but about something more serious. Does this sound like the words of a person who is ready to fulfill the conditions originally set by Moscow regarding demilitarization and denazification? In my opinion, not at all.

The hopes of clowns are fed ...

By the way, on the same day, March 11, Zelensky also addressed the Polish authorities with a very pompous speech, urging them to "share the victory over Russia" and thus affirm "common greatness." Well, this already utterly looks like a maniac's speech. However, one should not forget that the whole country is still held hostage by this crazy clown. And the worst thing is that he seems to be really sure that he can "win" - even if at the cost of its complete or almost complete destruction! I willingly agree that this is madness, but it is precisely this kind of madness that is broadcast to Zelensky from all levels - from the army command to the local propagandists. For example, Podolyaki’s colleague, another adviser to the head of the presidential office, Aleksey Arestovich assures both his own patron and the whole country that in a maximum of a month the Russian army will “finally fizzle out” and the hostilities “will subside by themselves.”

Moreover, “Moscow will be forced to move from direct negotiations to communication on serious international platforms,” where “its only demand will be not to finish off the remnants of its troops.” As Arestovich says, "we'll see if we agree or not." Another “strategic genius”, next to which Clausewitz nervously smokes bamboo, the head of the Kiev city military administration, General Nikolai Zhirnov, “in a blue eye” broadcasts that “Russia will never in its life assemble a military group necessary to take the Ukrainian capital.” Still, after all, one “should exceed the number of forces of the Armed Forces of Ukraine and other Ukrainian formations concentrated in it, at least 5-7 times.” At the same time, Zhirnov did not think of anything better than to bring for comparison ... the assault on the capital of the Third Reich in 1945, for which, according to him, the Red Army "it took 2 million personnel and 45 thousand artillery pieces."

An example, no doubt, is excellent - Zhirnov is simply five plus for him! Well, it’s necessary to give out so luxuriously what exactly the scoundrels who have now settled in Kyiv are positioning themselves as! Nevertheless, all such boastful statements also demonstrate that, alas, they have not yet come close to understanding their own situation. Again, Vadim Denisenko, an adviser to the head of the Ministry of Internal Affairs of the “non-secure” Ministry of Internal Affairs, does not hesitate to assure the people of Kiev that the Russian troops are not only unable to take the city - they are “completely incapable” of blocking it.

Moreover, Deputy Interior Minister Yevgeny Enin threatens that the Armed Forces of Ukraine "are about to launch a decisive counteroffensive near Kiev." To top it off, let me quote the data of the "sociological survey", which was allegedly conducted in the "independent" group "Rating" on March 8-9. According to these, “92% of respondents believe that their country will be able to repel an attack, and every day this figure is growing more and more ...” And also, “the absolute majority (97%) of the survey participants plan to stay in Ukraine in the near future, and 80% of Ukrainians take part in the war with Russia: as defenders, volunteers help financially or informationally.” How these completely unrealistic figures are compared with at least millions of “refugees” of quite military age, the most severe personnel shortage of the Armed Forces of Ukraine and other similar things is, of course, a rhetorical question. The trouble is that this kind of "sociology" and other "reliable information" of the same quality is stuffed with Zelensky, as well as other "leaders" of the agonizing country. Hence - and the ultimate self-confidence, and prohibitive arrogance in the same negotiations.

From all that has been said above, it follows quite, in my opinion, a logical question: is it worth talking about anything with this public at all? In a sense, about anything other than completely utilitarian issues, such as the construction of "green corridors" for the evacuation of civilians, or the delivery of humanitarian aid, and the like. They should be led exclusively by the Russian military, and not by anyone else. It is clear that there can be no question of any personal meeting between Vladimir Putin and the distraught "head of state" under any circumstances. At least due to the fact that such an event will definitely be used for an attempt (or rather, a number of attempts) to physically eliminate the President of Russia. As you remember, today in the West they call for it absolutely openly and without any hesitation.

The only result of the political part of the conversations between Kiev and Moscow is the demoralization of the Russian people on both sides of the front. In them, such "games" do not give rise to anything but fear and fear that the case will end in a shameful "agreement", in the light of which all the victims of Russia - both human and economic, and foreign policy will simply go to dust, depreciating to zero. Well, for many people on the territory of the “nezalezhnaya”, today they are in a state of “unstable balance”, thus creating the illusion of a possible “victory” and a return to the old life. And if so, then you can not drop your weapon, do not give up, but you should continue the "heroic struggle." In the territories already liberated from the power of the criminal Kiev regime, such “confusion and vacillations” give rise to those same rallies “for Ukraine” and other similar antics that seriously “spoil the blood” of the Russian military and complicate their combat missions.

Why is this all?! Why complicate an already extremely difficult situation? That patriotic upsurge, which, contrary to the expectations of the West, is now observed in Russia, can be replaced by bitter disappointment - if it suddenly turns out that "everything was in vain." The Kremlin should make it clear that there can be no agreements with Zelensky and his gang, who have finally turned into war criminals. That denazification is not only the dissolution and prohibition of the “national battalions”. The firm conviction that there will be no “obscene peace” under any circumstances is what is needed today both by the soldiers-liberators and those whom they liberate.
Ctrl Enter
Noticed oshЫbku Highlight text and press. Ctrl + Enter
Reporterin Yandex News
Reporterin Yandex Zen
12 comments
Information
Dear reader, to leave comments on the publication, you must sign in.