What will the appearance of the Kherson People's Republic lead to? 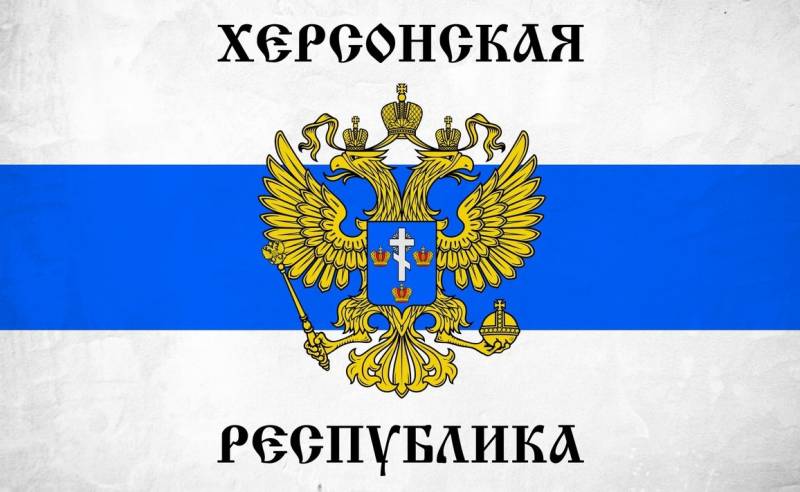 By the end of the third week of the special military operation of the Ministry of Defense of the Russian Federation to demilitarize and denazify Ukraine, certain intermediate conclusions can already be drawn. The defeat of Kyiv is a foregone conclusion, but our main problems will begin later. It becomes obvious that the US strategy is to destroy the country as much as possible in the course of a senseless confrontation from a military point of view, to embitter the local population, and then hang its content on Russia in the status of a giant “Transnistria”. Can we somehow break this cruel Washington game?

How the Zelensky regime will fall

Unless something very extraordinary happens, then the armed conflict will most likely follow the following scenario. The front in the Donbass will fall first. Encircled and deprived of the opportunity to get out of the "cauldrons", the most combat-ready units of the Ukrainian army, pulled together to strike against the DPR and LPR, will be forced to lay down their arms or be destroyed. For Kyiv, this will be analogous to the defeat of the Kwantung Army for Japan. The released units of the Russian army will then quickly occupy the entire Left Bank of Ukraine, leaving control over the rear to the People's Militia Corps of the DPR and LPR.

The next to collapse the front of the Armed Forces of Ukraine in the Black Sea region. Led by stubborn Nazis, they will shed a lot of Russian blood during the liberation of Nikolaev and Odessa, but the outcome, in general, is a foregone conclusion. After that, the capital of the former Independent Kyiv will be completely surrounded, and the last offer of complete and unconditional surrender will be presented to the Ukrainian regime. If the drug addict Zelensky refuses, Kyiv will begin to liberate district after district, and all responsibility for the inevitable victims will fall on the "bloody clown."

Then the question of managing a dilapidated country in the face of maximum opposition from the United States will arise. The Americans have at least 2 options to choose from: evacuate President Zelensky somewhere in Poland and organize a “Ukrainian government in exile” there, which we will discuss in detail reasoned earlier, or try to hold on to Western Ukraine by moving the “temporary” capital from Kyiv to Lvov. Judging by how the day before they “bang” with Caliber cruise missiles at the Yavoriv training ground in the Lvov region, the Ministry of Defense of the Russian Federation plans do not approve.

The general meaning of these events is quite obvious: not to recognize as legal the new Ukrainian authorities that will be installed by the Kremlin, turning, from the point of view of the collective West, the post-war Independence into one big “Transnistria”. What for? Then, to make it as difficult as possible to restore normal life in Ukraine, inciting its population against Russia. For this reason, one should not expect President Zelensky to fulfill the terms of surrender, and the plan itself “just to go in and force Kyiv to demilitarize and denazify” should be recognized as unsuitable. The client, so to speak, is incapable of negotiating.

And what remains to be done next?

If the Ukrainian “tops” refuse to cooperate, the problem will have to be solved “from below”. As we previously arrived at the conclusion, after the completion of the military operation, the former Square can no longer be left in its current form. No more unitary Russophobic state! Too late, alas, and with federalization. All that remains is splitting into several parts, but it is desirable to do this in a smart way.

The tools for this already exist - the scenario for the creation of the DPR and LPR. Naturally, now there is no time for nationwide referendums, but there is experience of the appearance of "people's mayors" and "people's governors" in a crisis period. To establish a normal life in the liberated territories, a special military-civilian administration is needed, which could include adequate people from local residents who understand that it will definitely not be the same as before. Following the example of Donbass, we should start proclaiming new People's Republics in the territories not controlled by Kiev right now. And the first can and should be Kherson.

A few days ago, the deputy of the regional council from the European Solidarity party Serhiy Khlan alarmed everyone:

The occupiers are calling the deputies of the Kherson Regional Council asking if we are ready to cooperate with them. I categorically refused... The creation of KhNR will turn our region into a hopeless hole without life and future.
"Poroshenkovets" urges colleagues not to cooperate with the "Russian occupiers". Immediately, from his bunker somewhere near Kiev, President Zelensky responded:

I will turn to some figures and activists of the Kherson region. If one of you is suddenly tempted by the proposals of the occupiers, then you will sign your own verdict.
What they were so afraid of, it is not difficult to guess. The appearance on the territory of the former Independent People's Republic will be the beginning of the process of its rapid collapse. Following Khersonskaya after the liberation of the city from the Nazis, the Kharkiv NR will be proclaimed, then Zaporozhye and Dnepropetrovsk. As the front of the Armed Forces of Ukraine collapses, the Nikolaev and Odessa People's Republics will arise in the south. This means the end of Ukrainian statehood in its current form.

These new Republics will be merged together with the DPR and LPR into a new federal state, Novorossia, with Donetsk as its capital. But this should not be the end of the matter. In parallel, the same processes should take place from below in Central Ukraine - Sumy, Chernihiv, Poltava and other People's Republics, which, after the liberation of Kyiv, should unite into the federal state of Little Russia.

Also, in no case should the Americans be left a single piece of land in Western Ukraine, taking control of its entire territory. With these specific regions, everything will have to be decided individually, but the proclamation of small, not self-sufficient republics there, which will be completely dependent on the center, seems to be the right scenario.

The former Independent State itself will have to be turned from a unitary state into a confederate one, consisting of Novorossia, Little Russia and several Western Ukrainian republics. The agreement on its creation should be signed in the liberated Kyiv. Recall that the fundamental difference between a federation and a confederation lies in the right of its members to withdraw with the formation of a new sovereign state.

Thus, the confederal form of the device can become a transitional stage to the subsequent soft division of Ukraine hostile to us.
Ctrl Enter
Noticed oshЫbku Highlight text and press. Ctrl + Enter
Reporterin Yandex News
Reporterin Yandex Zen
47 comments
Information
Dear reader, to leave comments on the publication, you must sign in.