Ukraine will be reduced to Galicia and Volhynia, becoming a hotbed of terrorist threat 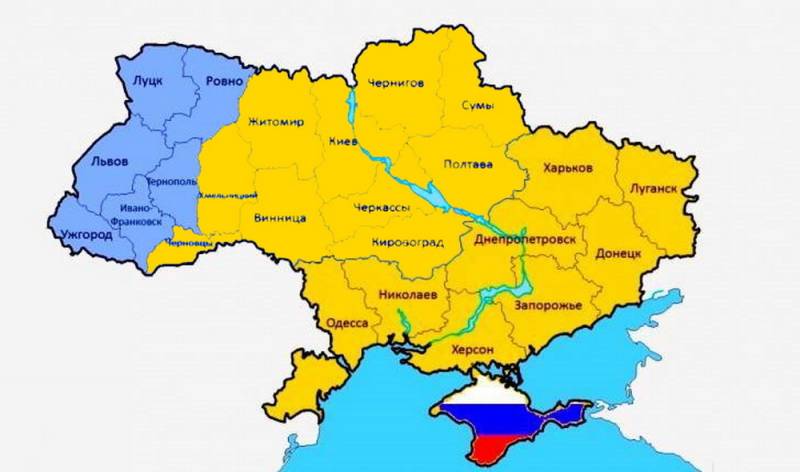 The special military operation of the Ministry of Defense of the Russian Federation to demilitarize and denazify Ukraine has been going on for the third week. Despite fierce resistance from the Armed Forces of Ukraine and the National Guard, Russian troops are systematically moving forward, freeing more and more new territories. From the outside, there is a strong impression that the West has completely abandoned Kyiv to be torn to pieces by the “Russian bear”. But is it really so?


Indeed, none of what was so hoped for in Ukraine, the NATO bloc did not fulfill. The Third World Nuclear War, which we were so scared of in 2014, for some reason did not start. Not the North Atlantic Alliance, but Russia closed the sky over Nezalezhnaya, sternly warning that the most severe measures of influence would be applied to violators. NATO armored columns did not rush to compete with the Z-troops to occupy the Right Bank and unblock Kyiv, and the US Sixth Fleet is not trying to drive the ships of the Russian Navy away from Odessa. Neighboring Poland has not yet decided to directly transfer Soviet-made fighters to the Armed Forces of Ukraine. Real military assistance from NATO is limited to the rapid transmission of intelligence, which, by the way, is extremely important and useful, as well as light weapons, such as grenade launchers, sniper rifles, MANPADS and ATGMs, for urban combat. It turns out that Ukraine was leaked in the West?

Drained, but not completely. To understand the reasons for the actions, or rather, the inaction of the United States and its allies in the North Atlantic Alliance, one should take into account the strategy that they adhere to in relation to the Russian Federation. No one in their right mind is going to fight directly with our country, the number 2 nuclear power in the world. Only indirectly, by proxy and on foreign territory. At the same time, the main stake is not on the military defeat of the RF Armed Forces, but on economic damage. And this is where everything falls into place. Let's take a closer look at what is happening in Ukraine now.

On the one hand, the Armed Forces of Ukraine and the National Guard tightly clung to the most important cities of the South-East - Kharkov, Mariupol, Nikolaev, Odessa. Ahead of the RF Armed Forces are problems with the liberation of Zaporozhye, Dnepropetrovsk, Kyiv. The so-called "defenders of Ukraine" are hiding in schools, kindergartens and hospitals, hiding behind peaceful houses in dense residential areas. In Mariupol, the Nazis settled at the strategically important Azov-Steel plant, turning the people driven there into hostages. In Kharkov, they dug in at a military plant producing armored vehicles, which the Russian Defense Ministry has already had to deal a number of blows. The Armed Forces of Ukraine blow up all the bridges across the rivers, mine and blow up railway stations and highways.

In other words, the entire socio-economically significant infrastructure is being destroyed. Consciously and purposefully, during the supposedly "heroic defense". There can be no talk of any sowing campaign during the hostilities. The ports of Mariupol and Odessa are held by the Armed Forces of Ukraine and the National Guard, blocked, and therefore the export of food and other Ukrainian products is impossible. This means that there will be no foreign exchange earnings in the budget.

This means that after the end of hostilities, the former Independent will face devastation and, possibly, even famine. It is in this form that the West is ready to hand it over to the Russian liberators.

On the other hand, quite serious military preparations are currently observed in Western Ukraine. The lion's share of the weapons that the NATO bloc supplies to Kiev as aid actually remains in Galicia and Volhynia. In the Podkarpackie Voivodeship, bordering with them, a special training-storage and transport-logistics hub has been created, in which Western military assistance will be accumulated, and the “defenders” of the Square will train. In order for the Russian Aerospace Forces not to preemptively bomb this center, the Pentagon deployed two batteries of the MIM-104 Patriot air defense system to the East of Poland. They say that instead of fighter jets that are useless due to the lack of surviving airfields, the Americans are ready to help Kiev by transferring anti-aircraft missile systems to fight Russian aircraft.

If we put aside all this propaganda and Ukrainian jingoistic husk, then the following picture emerges.

Washington is clearly ready to hand over all of Southeastern and Central Ukraine to Russia, destroying it as much as possible and killing as many people as possible on both sides. This is precisely what explains President Zelensky's staunch unwillingness to capitulate, despite the lack of any chance of fighting back on his own. However, the Americans apparently intend to keep Western Ukraine for themselves, turning it into a kind of Idlib, a “terrorist enclave” in Syria. Given the existence of a common border with Poland, it will be quite easy for NATO to do this. Unlike the rest of the territory, the North Atlantic Alliance will not surrender Western Ukraine, covering it from Russian air strikes with modern air defense systems. Most likely, NATO troops will still enter its territory.

What for? Then. President Zelensky is being evacuated from Kyiv to Lviv at the last moment. In fact, Ukraine will shrink to Galicia and Volhynia. In the US and the EU, it is the “bloody clown” regime that is recognized as the only legitimate one, and the rest of the territory is recognized as occupied by Russia. The question will arise what to do with it later if Moscow does not wait for Zelensky to capitulate. Attaching to the Russian Federation a huge part of the country destroyed by hostilities with a disloyal population is not the best option today. That is why it is now being smashed from the inside with the active assistance of the Armed Forces of Ukraine and the National Guard, so that the “Muscovites” get it in not the best possible condition. It will be necessary to create new state formations on the territory of South-Eastern and Central Ukraine - Novorossia and Little Russia, but their existence from the very beginning will be complicated by the presence of a “stump” state in the West with a legitimate president Zelensky, who will be considered by Washington and Brussels as the only legal successor. It will be an alternative center of power and consolidation of all those who disagree with the ideas of the "Russian World", as well as a source of constant terrorist threat.

That is, in fact, now the entire territory of Ukraine, with the exception of Western, is deliberately destroyed and turned into an analogue of the DPR and LPR, which the Americans will hang on Russia.
Ctrl Enter
Noticed oshЫbku Highlight text and press. Ctrl + Enter
Reporterin Yandex News
Reporterin Yandex Zen
44 comments
Information
Dear reader, to leave comments on the publication, you must sign in.