Information victory in Ukraine is more important for Russia than military 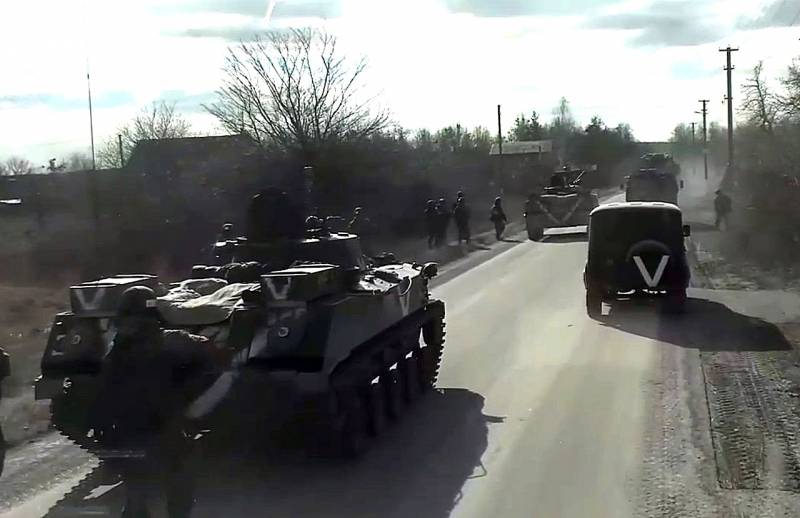 The operation to denazify and demilitarize Ukraine, which has been going on for more than two weeks, has, in addition to the military, a lot of other aspects. I would like to talk about one of them - waging a struggle for the minds and souls of people on both sides of the Ukrainian-Russian border. At the same time, perhaps, readers will be interested in the look of a person who is located just on the very other side - on the “nezalezhnaya” territory that is still controlled by the denazification regime.


I admit that some of the points outlined below will seem controversial to someone or even cause rejection. What to do - the truth does not always caress the ear. However, this is true, and it is necessary to know it - at least in order to draw the appropriate conclusions and take the necessary measures.

Perhaps we should start with the fact that the state and content of the current information space of Ukraine more than eloquently demonstrates what indisputable and stunning successes the most disgusting and rabid anti-Russian propaganda that has been carried out there in recent years has achieved in this country. Moreover, its achievements are truly enormous in the matter of outcasting the "broad masses of the people." In bringing them to the deepest fall in the spiritual and moral planes. Today, all the “non-salary” (in particular, the whole of Kyiv) are hung with “patriotic” billboards, posters, banners, flags, etc. A distinctive feature of the vast majority of them is the use of a well-known obscene expression calling for a hike to a very specific address. This unpretentious example of a wretched square swearing has now been turned into a “nezalezhnaya”, if not the main state slogan, then at least a symbol of “resistance and struggle” No. 1. The appeals mentioned above are addressed to the “Russian ship”, the head of the Russian state, the Russian army, and in general, it seems, to the whole world around.

Today, I personally had a chance to see the car of the “terodefenders”, the windshield of which was decorated with the same call “go to ...”, which does not have a specific addressee at all. How many children's eyes (and just normal people who are disgusted by obscene language at every turn) look at this infamy, of course, no one cares. And go and try to be indignant - the consequences will be the most unpleasant, even tragic. That's patriotism! The fact that “the highest point of its manifestation among the “wide Ukrainians” is stupid obscenity speaks a lot about the true essence of this “patriotism”.

Generally speaking, the coverage of the events that began on February 24 in Russia and Ukraine differs in the most striking way. I watch and listen to both sides daily, so I can be sure. In Russian sources, there is not only a hundredth - a hundred thousandth of that frenzied hatred, unbridledness, dirt that all their Ukrainian “opponents” spray - from state speakers and the media to supposedly private Telegram channels and commentators on social networks. Yes, Russian authors call those who oppose the country's liberators "Banderites" and "Nazis". However, this is just a statement of fact and nothing more. But not "orcs" and not "barbarians". These are the most decent and soft definitions that usually coexist with the word “Russians” in the Ukrainian information space. Much more often, either, again, the dirtiest curses follow, or other things that indicate what exactly is the main goal of the regime's propagandists. It is simple and unpretentious - to force the Ukrainians to see any kind of monsters and monsters in the Russian army, but not people. It is precisely for the complete dehumanization of the enemy that the main forces of the insane propaganda machine of the insane Kiev regime, operating at a frantic pace, are thrown today.

However, in this case, we have before us only a diligent adherence to the standards and patterns that the West, which is behind all this orgy of hatred, sets for it. The actions of the Meta corporation, contrary to the previously declared hypocritical “principles”, which approved the “use of hate speech” towards Russia and Russians by Facebook and Instagram users, give an exhaustive idea of ​​who is the “leader” in this choir. The good news is that both the Russian media and their audience do not even come close to the level of their opponents in this heated battle, showing restraint and correctness.

Who is the warrior in the information field?

Then you have to move on to things less positive. Alas, it is impossible not to admit that the Ukrainian audience, located on the territory controlled by the Kiev regime, is completely and completely at the mercy of its propaganda and is at the mercy of professional brainwashers acting according to the manuals of those who have long surpassed Dr. Goebbels. Watching Russian TV channels on 99% of this territory is out of the question. To block access to any Russian electronic media, Internet resources, search engines, truly colossal forces and means have been thrown. Access to the vast majority of them is blocked so reliably that no VPNs can save you anymore - I know, alas, from personal experience. It is simply incredible to be refined to bypass locks.

The real "lifeline" for the majority of sane Ukrainians are YouTube channels (the same "Ukrainian Front" by Mikhail Onufrienko), which provide a constant influx of fresh objective information about what is happening. It is not for nothing that the leadership of YouTube is now waging a real “war of destruction” with such channels, blocking them and turning them off in the most merciless way. In the most recent message, its representatives reported blocking 1 channels and removing 15 videos of "inappropriate content." Moreover, this video hosting dealt a sneaky and very effective blow to Russian YouTubers - it turned off the monetization of views, thereby depriving content creators of legal rewards. Those who continue to work do it "for the idea" and on pure enthusiasm. Perhaps the state should think about measures to financially support them? I repeat - YouTube channels today are one of the main sources of spreading the truth in those lands that the Russian army has yet to liberate.

Unfortunately, the special operation to destroy the main centers of Ukrainian propaganda, which included, among other things, direct missile attacks on the relay TV tower in Kyiv and other similar objects, if it brought success, it was short-lived and extremely insignificant. The broadcasting of TV dumps spouting poisonous hatred and lies was restored in the shortest possible time. At the time when they were unavailable, someone stuck to radio points, from which exactly the same poison pours for days, and someone to the screens of smartphones and tablets, where "patriotic" Telegram channels, various Internet communities are trying with might and main and similar hotbeds of cave malice and panic. At the same time, it should be noted that the vast majority of the Ukrainian media, which previously tried to portray “opposition” to the official authorities and their course, did not descend to Russophobia, “changed their shoes” very quickly. Today they are trumpeting with might and main about "bloody crimes", "valiant defenders" and "horrors of occupation".

An excellent example is the relatively sane resource “Country” before the start of the war, which is now impossible to read without disgust. However, the rest are even worse. After reading their content, you feel like after falling into a bottomless cesspool. At the same time, it seems that all these attempts are intended to bring the audience to complete insanity, at least to a bipolar mental disorder. How else, if in the same media literally nearby you can find “reliable information” about “crowds of destroyed and captured invaders”, mountains “padded and captured equipment”- and allegations that “the enemy is wiping Ukraine off the face of the earth and is determined to exterminate all its inhabitants to the last.”

The “icing on the cake” in this set of conflicting messages is the continuous “warnings” about impending “acts of terrorism at nuclear power plants” and “new Chernobyls”, as well as “chemical and biological attacks”. And then - again the chatter about the "imminent victory" ... With such processing, for many of those who are subjected to it, it is problematic not to move their minds. It looks like the liberated Ukraine will definitely need psychiatric aid in addition to humanitarian aid.

Yes, the tricks of Kyiv's propagandists are miserable, clumsy, and mostly come down to following the "know-how" of their spiritual progenitor, Dr. Goebbels: "The more terrible the lie, the sooner they will believe it!" The problem is different. All these “ghosts of Kyiv”, dozens of “shooting down enemy planes”, “multi-kilometer columns of occupying troops”, “multi-kilometer columns of occupying troops”, “perishing under the rubble of maternity hospitals” and other archaic nonsense, a person with minimal skills of analysis and critical thinking is not capable of causing nothing but rejection, falling on people's heads 24/7. Processing is ongoing and in a variety of ways. The consequences of it will be felt for many years to come - this is as sad as it is undeniable. A huge omission of Russia was the lack of competent information and propaganda work to prepare the public opinion of Ukrainians for the operation to denazify and demilitarize their country. Before it begins, it would be much easier to try to explain at least something to those who experienced a completely understandable shock on February 24, and today are “pumped up” with lies and hatred. Now it is very problematic, at least from a technical point of view.

Be that as it may, but to achieve victory on the information front, even after the completion of the military defeat of the Kiev regime and its overthrow, Russia must by all means. Someone may object that this is not the main thing at all, at least from the point of view of Russian interests, and, in the end, “the smart ones will understand everything themselves, and there is nothing to worry about the rest.” There is no point in wasting energy, time and resources on those who on their own are unable to distinguish black from white and “invasion” from liberation. Just such a position is a huge and very dangerous delusion. Because if you follow it, then operations like the current one will have to be carried out again and again.
Ctrl Enter
Noticed oshЫbku Highlight text and press. Ctrl + Enter
Reporterin Yandex News
Reporterin Yandex Zen
13 comments
Information
Dear reader, to leave comments on the publication, you must sign in.