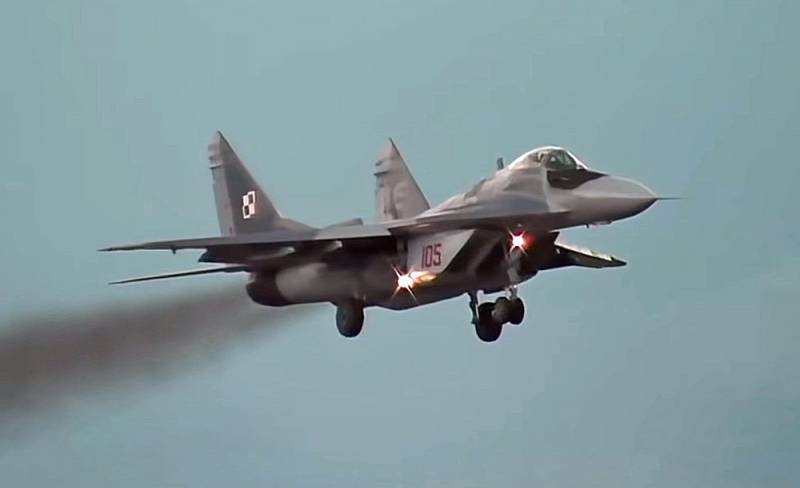 The story of the supply of “second-hand” combat aircraft to Ukraine from the stocks of NATO countries that were once members of the Warsaw Pact, which has been going on for many days, will soon be equal to the Latin American series in its multi-part series and intensity of passions. Well, in terms of genre, from the very beginning, it is more likely not a tragedy, as which Zelensky is trying to present this issue to the whole world, but the most ordinary farce. Well, "tragedies" performed by clowns usually look like that.


The extremely tough position taken in this case by Russia pretty much cooled the ardor of all the "interested parties" in the West, who were eager to transfer the old MiGs and Sushki to the "nezalezhnaya" so that the Russian troops would suffer at least some more damage. Moscow made it clear that it would not be possible to do this without any damage to themselves and their loved ones. As a result, we are now witnessing a truly epic battle between Russophobia, greed and cowardice going on in the minds of Kyiv's "partners" and "allies".

And get on the plane and not get into trouble

Approximately in such a paradigm today both Polish figures, who found themselves in the very center of the process of supplying the criminal Kiev regime with combat aircraft, and their overseas curators, who, as usual, seek to rake the heat with the wrong hands, are living in this paradigm. However, before proceeding to the description of the most fascinating ups and downs and intrigues that unfolded around the transfer of Polish aircraft to Ukraine, one should first remember what they actually are. So, as of 2020-2021, the local Air Force had 22 MiG-29 fighters, as well as a dozen Su-22 fighter-bombers. All this technique still Soviet production, while the bulk of the fighters, the Poles received far from first hand - the MiG-29 was purchased by them in 1995 in the Czech Republic and in 2004 in Germany. Being, of course, already pretty "ushatany".

As for the Su-22, the question of the full development of the resource and the decommissioning of these machines was raised back in 2010. However, due to the lack of an alternative, their service life was extended until 2024-2026. But this is nominal. In reality, everything is very, very sad with them. As for the MiGs, in 2021 their combat readiness coefficient was estimated at 0.5, falling short of an acceptable level for NATO. It got even worse after Warsaw completely severed military-technical cooperation with Moscow in 2014, without which there was no need to talk about the normal repair and maintenance of these machines at all. The results were not slow to affect - in the period from 2017 to 2019 alone, three Polish MiG-29s crashed. The number of smaller incidents that did not end in the death of cars and pilots cannot be counted.

So the representative of the Pentagon, John Kirby, who on the eve made a statement that the transfer of Polish MiG-29s to the Armed Forces of Ukraine "is unlikely to significantly change their effectiveness in comparison with the capabilities of the Russian Aerospace Forces" simply announced a completely obvious thing. As he noted, "the benefit from these aircraft for Kyiv will be small." But the problems of those who decide to take on the implementation of this adventure can rake, as they say, "I can't do it at all." Referring to "intelligence information", the representative of the military department issued in addition another platitude: a rude and insensitive Russia supplying the Ukronazis with fighter jets could be "mistaken for an escalation" and "react very seriously" to such actions. Indeed, the word “erroneously” touches me most of all in this passage! The standard of American verbiage. In a word, the Pentagon once again pointed out that because of some antediluvian aircraft, hostilities between the Russian army and NATO could well begin, which, of course, they absolutely do not crave. I do not know if John Kirby has a military rank, but, in my opinion, "Captain Obvious" would suit him just right.

By the way, his colleague from the White House, Jen Psaki, spoke on the same occasion unexpectedly coherently and sensibly. According to her, "you do not need to be an expert in the military field to understand what the departure of combat aircraft from the US Air Force base" in the direction of Ukraine will lead to. Moreover, it should be noted that speaking about their possible route, the press lady used a very characteristic euphemism: "to the contested part of the country." Otherwise, according to Psaki, MiGs would have to be transported on the ground “in a disassembled state”, and then assembled again. There are no conditions for this, there are no specialists in the “nezalezhnaya”, so there is nothing to discuss this option, according to Washington.

Generally speaking, the position of Warsaw, not Washington, is of the greatest interest in the described history. Overseas, of course, they are trying to kindle a larger military fire in Europe and harm Russia as much as possible. But the Poles... At first they were going to supply planes. Then, after a decisive warning from Moscow, they changed their minds. However, the national mentality is, apparently, an irresistible thing... Persistent exhortations began to sound from the USA, backed up, moreover, by promises of a purely material nature. When Secretary of State Anthony Blinken announced that his country had "given the green light to Polish MiG-29 deliveries to Ukraine," it sounded rather odd. After all, it was not about the transfer of American weapons systems to someone, which, as a rule, is really subject to agreement. Why do overseas partners care about military antiques made in the USSR?

In fact, it was probably about the fact that the "senior partners" promised Warsaw a certain number of fighters from their own "bins". Most likely, it was about the decommissioned and mothballed F-16s, which are familiar to the Polish Air Force. In any case, after the transparent hint made by Blinken on March 6 that “their defense would not suffer,” the Poles itched for only a couple of days, and on March 8 they announced that they agreed, so be it, to give Ukraine the MiG-29, but “with the provision replacement aircraft with appropriate operational capabilities." And they clarified their own readiness to "set the conditions for the purchase of aircraft." Who will pay whom in this case - the Ukrainians to Poland, or she - to the Americans, remains not entirely clear. After all, Warsaw, it seems, was ready to “provide free of charge” its fighters. However, on such additional conditions, from which Washington was simply stunned.

The cunning Poles came up with an ingenious and completely win-win (in their opinion) scheme: they overtake every single one of their own MiGs to the Ramstein US Air Force Base located in Germany - and wash their hands of it! Then let the Germans and Americans have a headache. What is the meaning of such an ornate logistical solution (from Poland to Ukraine is definitely closer - what to go, what to fly!), I think it is not necessary to explain. Warsaw habitually decided to slip behind the "broad backs of senior comrades." Like, we’ll overtake the MiGs for you - and then I’m not me and the fighter is not mine! As already mentioned, in the United States, such "creativity" caused a real shock. No, the Polish arrogance and greed there, presumably, have become accustomed to. But to such! Washington called Warsaw's proposal "unexpected", "having no serious justification" and generally "creating complex logistical problems."

It must be assumed that the Americans, in contrast to the somewhat inadequately perceiving the situation and the current realities of the Poles, are well aware that the "Caliber" or something worse can easily fly along the "Ramstein". The members of the North Atlantic Alliance are Poland, Germany, and the United States, so there is not much difference. In the end, the issue of fighters again "hung in the air." No one seeks to take on the burden of making a final decision and to be substituted for the Russian “response”. The inconsolable Zelensky groans to no avail in Kyiv, urging Poland and the United States to “stop playing ping-pong with human lives” and stop shoving responsibility on each other. Less pathos, my friend! If you have not yet understood that they wanted to sneeze at you, your claims, as well as at every single Ukrainian in all the West you love, these are your problems. And to someone, but not to you, to reproach others for "playing with lives."

At the present moment, the case ended with the fact that in Warsaw they once again “changed their shoes”. They said they were "ready to act", but only "with the approval of all other NATO allies" and in agreement with them. At the same time, the adviser to the Polish president, Yakub Kumoh, who announced this position, did not fail to boast that his country “did not allow itself to be blamed for the tragedy of the Ukrainians,” and the country’s Foreign Ministry, which gave birth to the “brilliant” scheme with the transfer of MiGs to Rammstein, at the same time “ acted like a major international player." Polish arrogance - this is not cured ... Does the "nezalezhnaya" have a chance to still see, by and large, aircraft that absolutely do not decide anything for her? It is very difficult to believe in such a thing. German Chancellor Olaf Scholz officially announced that his country “will in no case supply combat aircraft to Ukraine,” and it also does not intend to contribute to anything like that. This is the question of Rammstein. In turn, the head of the European Council, Charles Michel, specified that "European funds are not intended to finance the supply of military aircraft to Ukraine." That is, if any of the particularly resourceful members of the EU suddenly decides to earn extra money on such a dubious gesheft, nothing will definitely break off from the “general cash desk” for him.

On the other hand, the financial issue here is clearly not the main one. Well, if the Poles managed to overcome their phantasmagoric greed and abandon the prospect of getting "almost for nothing" little-worn American fighters, then the matter is different. The main deterrent role is unequivocally played by Moscow’s words, which are understandable even to the biggest European and American slow-witted people, that Russia will perceive as hostile actions not only the transfer by NATO countries of any combat aircraft to Ukraine, but also the provision of its own airfields for basing. A very entertaining incident is being created - any of the options that those who want to prolong military operations in the “nezalezhnaya” as much as possible fall under, if not one, then another definition. Wherever you throw it, everywhere is a wedge. Polish wings will not fly over Ukraine. Presumably - and no others either. Except for the Russian Aerospace Forces, of course.
Ctrl Enter
Noticed oshЫbku Highlight text and press. Ctrl + Enter
Reporterin Yandex News
Reporterin Yandex Zen
11 comments
Information
Dear reader, to leave comments on the publication, you must sign in.