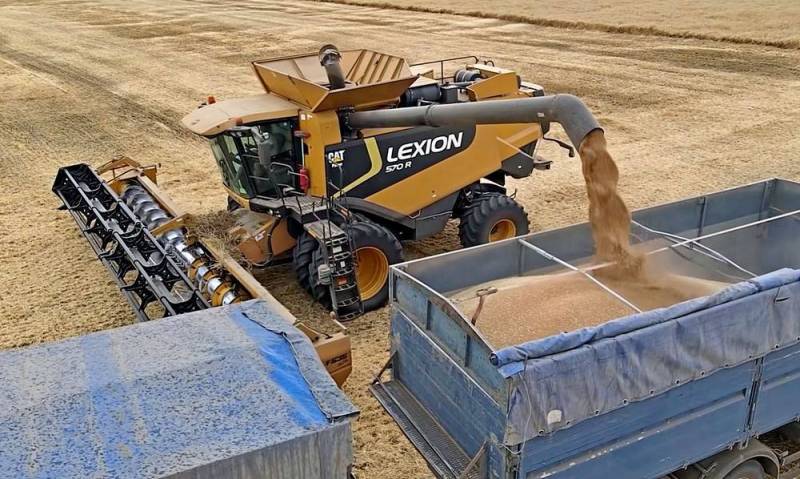 The dramatic events currently taking place in Ukraine will have very serious and far-reaching consequences for the whole world. The problem lies not only in the astronomical price tags for gas, oil and other natural resources, which make industrial production unprofitable, but also in the skyrocketing food prices. So why don't the puppeteers from Washington let the "pianist" Zelensky capitulate, knowing that the UAF has no chance of resisting?


The fact is that a direct consequence of fierce hostilities on the territory of Independence could be a real famine in the densely populated, poor and therefore explosive regions of the Middle East and North Africa. Once the main "breadbasket" of the Soviet Union, independent Ukraine, until recently, was one of the largest players in the global food market, second only to the United States, Canada, Russia and the European Union as a whole.

For wheat, for example, it was in fifth place in the world. In addition to wheat, corn, barley, millet, sorghum, peas, chickpeas, beans, beans and lentils are exported. The main markets for Ukrainian food are China, Egypt, Iran, Turkey, Korea, Indonesia, Morocco, Bangladesh, Tunisia and some countries of the European Union.

It should be noted that the share of Ukraine and Russia together accounts for about 30% of the global grain market. Our country also traditionally remains a supplier of wheat and other food products to the markets of North Africa and the Middle East. At the same time, the Russian Federation is a major exporter of mineral fertilizers, which are required in agriculture. Currently, restrictions are imposed on the supply of Russian potash fertilizers abroad.

So, due to the forced start of a special military operation to demilitarize and denazify Ukraine, which the Kremlin provoked Washington, the world food market was under attack, which could lead to mass starvation in a number of densely populated, poor countries and subsequent political upheavals. In the near future, Ukrainian farmers were supposed to start sowing work, but, alas, this is impossible to do.

At first, on the territory, probably already of the former Nezalezhnaya, fierce hostilities are going on, heavy weapons are used - cruise missiles, tanks, MLRS, aircraft, mortars. Tens of thousands of distraught civilians are running around the country, to whom President Volodymyr Zelensky, without an official declaration of war on Russia, uncontrollably distributed automatic firearms.

Secondly, in Ukraine there is already corny no fuel and fuels and lubricants. As you know, Kyiv was critically dependent on fuel supplies from Russia and Belarus, which stopped after the start of the military operation. Due to the shortage of diesel fuel, the Armed Forces of Ukraine and the National Guard have to abandon undamaged tanks and armored personnel carriers right along the roads. What kind of sowing season can we talk about in such conditions, if the farmers now have nothing to fill the tractor, and then the combine?

Thirdly, the Ukrainian military is consistently and purposefully destroying the transport infrastructure of their own country, so long as it “does not go to the Muscovites.” Bridges across all rivers explode. The Armed Forces of Ukraine are destroying railway stations, depots and railway stations in order to hinder the advancement and supply of Russian troops. Roads and vast territories around populated areas are being mined, which, no doubt, will come back to haunt civilians with torn off legs more than once.

Finally, the activities of the largest commercial ports of Ukraine - Odessa and Mariupol, through which the lion's share of the export of its products went, were blocked. You can be sure that, leaving, the Ukrainian Nazis will also render the port infrastructure of their country unusable. As they say: neither to yourself, nor to people.

Taken together, this means that in 2022 the former Nezalezhnaya will have to be deleted from the list of the largest exporters of grain and other food. Rather, Russia, as a winner, will have to feed the Ukrainians themselves, in the literal sense of the word, since the country will be destroyed by its own “defenders”.

Let us note that our captious Rosselkhoznadzor quite unexpectedly lifted restrictions on the import of a fairly wide range of food products from abroad a few days ago. So, supplies of hatching eggs and chickens are resumed from Turkey. Georgia will be able to supply dairy products to Russia, Azerbaijan - meat products and apples. Unhindered imports of Belarusian milk, meat and animal feed begin again. China, Moldova and Serbia resume supplies of stone fruits and nuts, Bosnia and Herzegovina - pears. Faraway Bangladesh (!) will be able to export potatoes to Russia. Surprisingly, because in the philistine consciousness we usually associate neighboring Belarus with potatoes.

As you can see, Moscow also began to prepare, not relying only on its own strength. Of course, we will feed ourselves and the former Ukraine destroyed by the Nazis. But the poor countries of North Africa and the Middle East are not to be envied.

The loss of Ukrainian farmers from the world market for at least a year will lead to a shortage and an increase in food prices. Recall that the restriction of grain exports from Russia against the backdrop of a crop failure in 2010 was one of the main preconditions for the so-called "Arab Spring" in 2011. It is possible that the puppeteers who are pulling the strings of President Zelensky, not allowing him to capitulate in an armed conflict where Ukraine has no chance, are quite happy with this.

Everyone somehow forgot about the coronavirus pandemic under the explosions of rockets. Now the "excess" population on Earth will face the man-made problem of hunger.
Ctrl Enter
Noticed oshЫbku Highlight text and press. Ctrl + Enter
Reporterin Yandex News
Reporterin Yandex Zen
11 comments
Information
Dear reader, to leave comments on the publication, you must sign in.