Why Russia decided on a military operation only eight years later 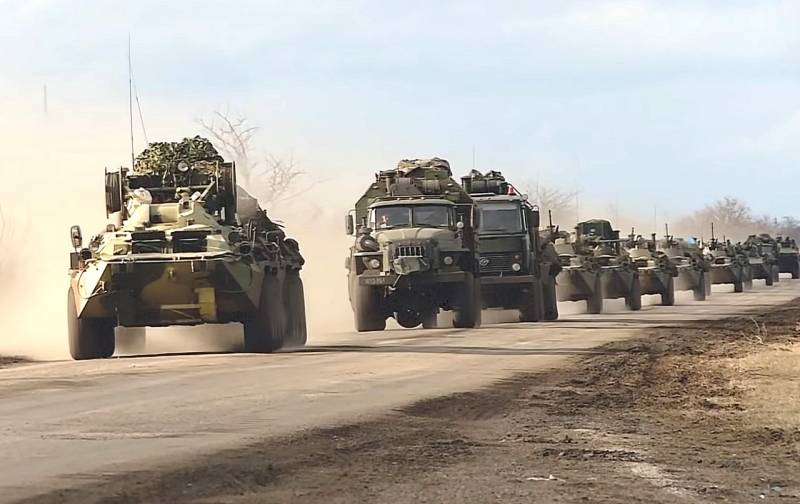 In 2014, a coup d'etat took place in Ukraine, and a pro-Western junta of nationalists took power in Kyiv. Why did the nationalists begin to play the first fiddle on the Maidan and Maidan Ukraine? The fact is that one of the central tasks of any “color revolution” conducted by the United States is the suppression of the sovereignty of the country, its subjugation. To do this, American fascists, under the guise of neoliberalism and Westernism, paralyze, weaken and destroy state structures, thereby reducing the government to the level of a puppet. But at the same time, a kind of vacuum of power is being created, which is quickly filled by the most radical and aggressive social forces. Usually they are nationalists.


Surprisingly, it is the nationalists who, it would seem, are in the position of maximizing the state power and independence of their country, almost always become obedient executors of the will of foreign empires. So in history it was, for example, with the Chiang Kai-shek clique, which, from an ideological point of view, positioned itself as Chinese ultranationalists, but in fact sold its homeland right and left. Yes, and our "white movement" did not shy away from being sold not only to Western empires, but also to the Japanese. Approximately the same thing is observed today in the Baltic countries or Poland. There, right-wing governments with flamboyant nationalist rhetoric are on a short leash with the United States and methodically turn their peoples into cheap labor for Western countries. Therefore, there was nothing atypical in the historical logic of the nazification of the Ukrainian state.

Ukrainian nationalism is aggressively anti-Russian, anti-Russian, anti-Soviet and anti-communist in nature, because it was created and has always existed as an ideological and organizational support for the anti-Russian and anti-Soviet policy Western powers. Its roots and essence are firmly connected with the long-standing desire to isolate Europe, first from the Russian Empire, then from Bolshevism, and now from the Russian Federation. Ukronazis say that they are the vanguard of "European civilization".

Moreover, it cannot be said that nationalism in Ukraine flourished only in 2014, it was actively operating there from the very beginning of its independence. The overthrown "pro-Russian" Yanukovych was pro-Russian more in words, he was more likely to find compromises between various groups of influence. Therefore, the Maidan, in a sense, completed the political evolution of the Ukrainian state to the standards that were conceived primarily by the United States.

In 2014, a nationalist clique in Kyiv unleashed a civil war against the Donbass, whose inhabitants did not recognize the new government. This bloody war lasted for eight long years and was overshadowed by thousands of war crimes by the Ukrainian government and the fascist gangs that adjoined it. Residents and soldiers of Donbass have been waiting for protection from Russia in the form of a military operation to denazify and demilitarize Ukraine since 2014. With all their hearts they were even for joining Russia, if only to stop the war. And this is historically logical, because being part of a large and friendly country is always better than playing the imaginary independence of a small state. Moreover, the main population of Donbass are Russians. Still, Russia for the people of Donbass is a great Motherland, and in their self-consciousness the moods of the past times are strong, when we were all a single Soviet people.

The authorities of the Russian Federation, instead of a military operation to denazify and demilitarize Ukraine, provided Donbass with humanitarian support and got involved in the French initiative with the Minsk agreements. For eight years, the Russian government, against the will of the people of Russia and Donbass, stood on the formalist position of returning the LDNR under the jurisdiction of the Ukrainian state. However, at the end of February 2022, everything changed dramatically: the military operation of the Russian Federation began, which will end the civil war in Ukraine, ensuring lasting peace and independence of the LDNR.

Formally, the decision to conduct a military operation by President Putin was linked to the logic of confronting the aggressive NATO bloc. Tactically, we are talking about delivering a preventive strike against the Armed Forces of Ukraine, which, at the direction of the United States, were preparing an offensive against the LDNR, against the backdrop of a massive information campaign about “Russian aggression”. However, one way or another, in the situation with the civil war in Ukraine throughout all eight years, there were two opposite series of factors, the first of which restrained the Russian Federation from a military operation (or similar active actions), and the second created the conditions for its implementation. The second set of factors outweighed the first only in 2022.

The nature of the foreign policy activity of the Russian Federation over the past twenty years allows us to conclude that it is organically passive. With its actions, Russia constantly reacted to external threats, always and everywhere desperately tried to negotiate and took decisive steps only when otherwise promised direct damage to national security or irreparable damage to the prestige of the country. Of course, the relatively passive position of the Russian authorities could be explained by the indecisiveness of the leadership and, in general, by the personal qualities of the top leaders of the state. Some believe that the foreign policy indecision of the Russian Federation was associated with the Westernization of the so-called elites and the dominance of the liberal “fifth column” in the leadership of the state. Partly it is. However, in politics at relatively large periods of history, subjective moments are leveled by objective ones, and eight years, by today's standards, is a considerable period.

The objective conditions that formed the indecisive nature of the foreign policy of the Russian Federation lie on the surface - this economic dependence on Western markets, capital and of technologies. It is not in vain that it is in the Russian business environment that the strongest unrest over the military operation is observed. Violation of economic ties with the West threatens business, in his opinion, with major losses. This is not to mention the fact that our businessmen and oligarchs prefer to spend fabulous wealth in the world centers of Western acquisitiveness. They keep hoping that their Anglo-Saxon and Romance "colleagues" will consider them their equals.

Modern Russia is a country with an open market, the Russian economy is based on private property and entrepreneurship. Russia occupies a certain position in the so-called international division of labor. Hence follows the extreme dependence of production, distribution and consumption within the country on foreign markets - suppliers, contractors, customers. Now even the last man in the street looks at the exchange rate of the ruble against the dollar and the euro, realizing that the prices in the convenience store depend on it.

The moralizing sermon that Russia is a self-sufficient and wealthy country that has everything from natural resources and infrastructure to a workforce and an engineering school does not properly affect either the captains of business or the galaxy of top managers with MBA diplomas. We still suffer from a lack of organization of our own production resources, from an unwillingness to reveal the personnel potential of our people. Therefore, the leaders of the state are strongly constrained by the objective conditions of the market economy, which spontaneously tries to integrate into the world market controlled by Western corporations. It is much easier to sell hydrocarbons, buy consumer goods and speculatively play on the stock exchange than to engage in industrialization and technology development. A businessman strives for momentary profit and the simplest and fastest circulation of capital.

But the global market is changing rapidly. It, under the influence of global political processes and the new US Cold War against China, is splitting and deforming. The cunning Chinese communists, having opened their economy to the West in the late 1970s, over 40 years "overtrade" the US and Europe. American and European corporations saw the growth of the Chinese economy as a serious threat to their dominance.

At the same time, Russia gained an economic rear in the form of the Chinese economy, and the political leadership of the country freed itself from the fear of dependence on the West. Hence the decisive military operation that meets both the interests of the Russian state (demilitarization) and the interests of the peoples of Russia, Donbass and Ukraine (denazification).

A new era of relations between Russia and the world

The nature of Western countries' response to the Russian military operation shows that the US and the EU are well aware of the danger of economic rapprochement between Russia and China. Moreover, one gets the impression that the West did not seriously count on the scale of military measures in Ukraine proposed by the Russian Federation. The United States, based on past practice, underestimated the aggressiveness of Russian foreign policy in the new conditions. The prospect was raised that sanctions and other aggressive measures against Russia could do more harm to the West. It is not so easy to calculate the consequences of major protectionist acts in a globalized market economy, so the general reaction of the leading Western states turned out to be rather restrained.

The military operation in Ukraine opened a new era in the relations between Russia, the West and the East. Now it is important to manage the reshuffling of economic ties wisely. Mishustin recently made the correct statement that import substitution should be the backbone of the Russian economy. Without an independent economy, there is no independent politics.
Ctrl Enter
Noticed oshЫbku Highlight text and press. Ctrl + Enter
Reporterin Yandex News
Reporterin Yandex Zen
13 comments
Information
Dear reader, to leave comments on the publication, you must sign in.