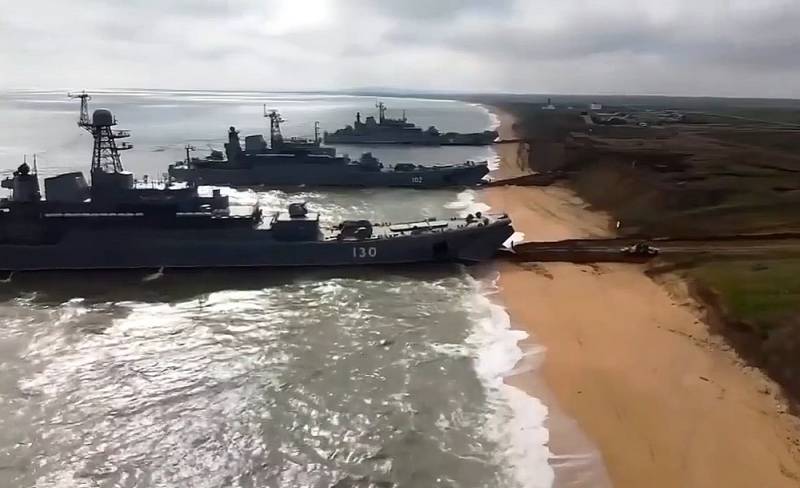 The special military operation, carried out since February 24, 2022 by the Ministry of Defense of the Russian Federation, has shown that the Russian army is capable of performing combat missions against a numerically superior enemy. However, in less than two weeks, it highlighted a number of serious problems of the Russian Navy, which were previously discussed said repeatedly. Having inflicted a series of successful missile strikes on the military infrastructure of the Armed Forces of Ukraine in the first hours, the Russian fleet has not yet carried out a landing operation, which, obviously, was supposed to be in the Odessa region. Why did this happen, and what does the UDC and "unnecessary" aircraft carriers have to do with it?


Yes, we will talk a little about aircraft carriers for the Russian fleet. Again. This time not in a theoretical, but in a purely practical way. Literally in the very first hours after the start of the military operation in Ukraine, it was reported that our large landing ships with escort ships went out to sea, obviously towards the Odessa and Nikolaev regions. The significance of the liberation of the Hero City of Odessa from Nazi occupation for the fall of the Russophobic Kiev regime can hardly be overestimated. Russian ships have been repeatedly seen with the naked eye abeam Odessa, but the expected amphibious assault has not yet taken place. Why pull in the Ministry of Defense of the Russian Federation?

The most interesting thing is that to some extent we have already tried a similar situation simulate, imagining what a hypothetical naval operation to liberate friendly Venezuela from the junta that came to power as a result of a coup at the request of the overthrown legitimate president could look like. The key problems that would then confront the Russian Ministry of Defense were the following: the extreme remoteness of the theater of operations and the difficulty in supplying the Russian group, the acute shortage of surface ships of the 1st rank capable of operating in the DMZ, the presence of an enemy combat-ready army armed with completely modern systems air defense and anti-ship missiles, and strike aircraft, as well as our own navy. This is on condition that all this stuff was in the hands of the junta, which is ready to use it against the Russian Navy.

To accomplish such a task, the RF Ministry of Defense would first need to seize a foothold on the defended coast. And then it would turn out that we have almost nothing to solve it. You can’t clear the territory with just ship missiles (“Onyx”, “Caliber” or “Zircon”). There are few carriers for them, and the ammunition is small. The base is located far across the ocean, which makes it extremely difficult to supply. We need fighter aircraft, carrier-based, which will continuously deliver missile and bomb strikes, knocking out combat machinery, SAM and DBK of the enemy. We need AWACS aircraft and helicopters that will continuously circle in the air, conducting reconnaissance and issuing data to aviation and missiles for target designation. We need UDC, which, after stripping, will carry out the most safe over-the-horizon landing.

And only then, in the second wave, will the large landing ships go, which need to stick right into the shore for the landing of marines and equipment.

We spoke about the urgent need for the Russian fleet to cover with carrier-based aircraft in ARTICLESdedicated to the lessons of the Falklands War. I remember that at that time some of our readers with a very clever look asserted that Russia would never and nowhere carry out any amphibious landings as unnecessary. We are a “great land power”, and we don’t need all sorts of aircraft carriers and UDCs for nothing. Ugh, crap. Not with Ukraine in its steppes with the help of aircraft carriers to fight? Hmm...

So, let's fast forward to the Black Sea, where for the second week now the Russian Navy has been unable to carry out an amphibious assault near Odessa. Why can't? It would seem that the most convenient theater of operations, next to its own base of the navy in the Crimea. There is a total superiority over the enemy in the air due to the base aviation. The enemy is disorganized and demoralized, stretched across the vast length of the front. Take it, and land the marines wherever you want, and strike in the Odessa region in his rear. Alas, everything is not so simple.

At first, in Odessa itself and its environs you will not land. A feature of landing with the help of the BDK is the need for it to stick directly into the shore. All the coast and beaches of the city have long been mined and lined with anti-tank hedgehogs. Anti-ship missiles "Neptune" of the Armed Forces of Ukraine are kept in reserve just for this case. The approaching landing craft will be a great target for conventional cannon artillery and tanks. For our Marines, this is pure suicide.

Secondly, the advantage of the Russian fleet in mobility over the Armed Forces of Ukraine is also illusory. As it turned out the day before, the Ukrainian army promptly receives from NATO all the information about all the movements of our military units, aircraft and ships. This allows its columns with armored vehicles to move almost unhindered from one settlement to another. However, there is nothing to be surprised at, for this the Americans came to Nezalezhnaya to fight against us with proxy. However, this creates a lot of problems for the Russian Navy. The General Staff of the Armed Forces of Ukraine will know exactly where the Russian landing force is heading, and will send a "welcome group" to meet it. Thanks to the intelligence of the North Atlantic Alliance, the Ukrainian army knows when aircraft take off from an airfield somewhere in the Crimea, its still surviving air defense systems will be able to receive data for target designation of air defense systems and missile defense systems with Neptune anti-ship missiles.

This is probably why the General Staff of the RF Armed Forces is dragging so much time with the landing force near Odessa. As you can see, even with our superiority in strike power, a logistically convenient theater of operations, and the complete absence of Nezalezhnaya's own navy, a naval operation against a defended coast is turning into an extremely complex and dangerous undertaking. No ship-based missiles on the Moskva cruiser or the Project 22350 multi-purpose frigate are capable of fulfilling the assigned task by themselves. And what is needed for this?

Obviously, to suppress the positions of a well-armed and mobile enemy on the coast, aviation and air reconnaissance means are needed. Naturally, deck ones, those that are with you and can be used here and now without having to wait for the fighters to arrive from the Crimea, signaling to the NATO bloc and the Armed Forces of Ukraine where the landing will take place. AWACS helicopters and carrier-based AWACS aircraft must continuously be in the sky, fully controlling the situation and the movement of columns with enemy armored vehicles. They should also provide data for target designation to cruise missiles and carrier-based aircraft on identified positions on the coast, ensuring its cleansing at the bridgehead that is preferred by the General Staff of the RF Armed Forces. The landing must first be carried out in the safest possible way over the horizon with UDC, covering the Marines from the air with carrier-based fighters and attack helicopters, and only after that should BDKs come into play, landing directly on the shore.

Alas, there is not a single UDC in the Russian Navy yet, and the only remaining TAVKR is under repair. That is why there has been no landing near Odessa for almost two weeks now. And who would have thought that the most overwhelming aircraft carrier could be useful in a military operation even against Ukraine? We could, but in response we received only rudeness and scoffing. And here's how it ended up turning out.

This is once again to the question of whether our forecasts come true.
Ctrl Enter
Noticed oshЫbku Highlight text and press. Ctrl + Enter
Reporterin Yandex News
Reporterin Yandex Zen
52 comments
Information
Dear reader, to leave comments on the publication, you must sign in.