Denazification of Ukraine: expectations and reality 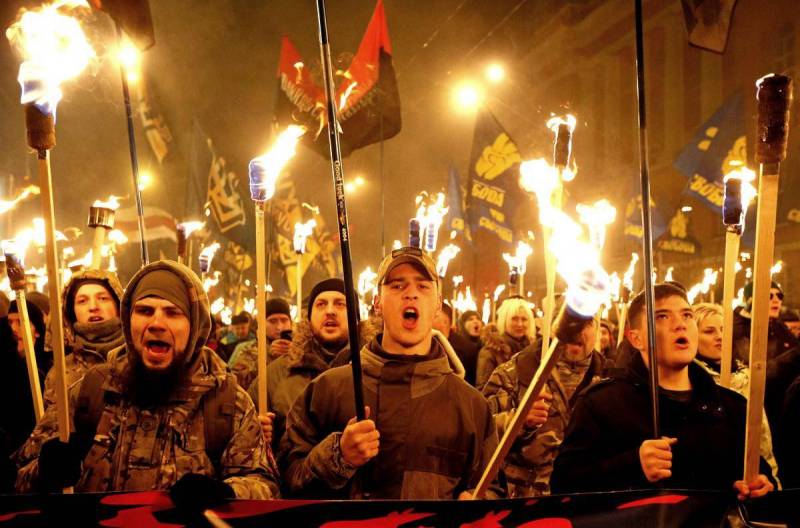 The fact that the military operation to force Kyiv to peace will be carried out to the bitter end is becoming more and more obvious to absolutely everyone. In fact, in the current conditions, Moscow was simply left with no other choice - to lay down the Armed Forces of Ukraine by order of Zelensky in the first two or three days of the offensive, some kind of “space for maneuver” the current “independent” government would probably have. Now, this option has become completely unrealistic - only the complete defeat of the enemy and unconditional surrender. With all the ensuing consequences for Ukraine.


To the great joy of the residents of this country awaiting release, the Kremlin’s rhetoric in this regard has become somewhat clearer and more unambiguous - on March 4, the press secretary of the President of Russia, Dmitry Peskov, bluntly stated that there could be no question of any “renunciation of denazification” that Kiev had imagined. It inspires and gives hope. However, the question remains open as to how the process, so vital for the country captured in 2014 by the Nazi rabble, will actually take place. Let's be honest - the initial stage of the military operation to liberate Ukraine showed that between the seemingly carefully worked out plans and realities, the distance can be, indeed, "huge size." Ridding this country of the disgusting heritage of neo-Banderism may be many times more difficult than defeating its military formations.

How can it be

In the issue of denazification of Ukraine, there is a possibility of committing very dangerous mistakes, which can be caused by certain misconceptions and, let's call a spade a spade, ideological clichés. The same Peskov mentioned "a huge number of nationalist associations that need to be got rid of." This, as Vladimir Ilyich used to say, is archival! However, it should be understood that by no means should one limit oneself to a legal ban on all sorts of "Bandera cells", the creation of lists of terrorist and extremist organizations, following the Russian model, and similar things. We need an open, public and maximally covered in the media around the world trial on the model of Nuremberg. At the same time, not only criminal organizations and parties whose ideology was Ukrainian nationalism should be subjected to unconditional condemnation and prohibition, but this very ideology as such.

Truly titanic work remains to be done - after all, to condemn Ukrainian nationalism, one will have to talk not only about the events of the Great Patriotic War, but also about the affairs of a hundred years ago. And, nevertheless, this will have to be done - so that the whole world can see and realize that Russia is not fighting against “national consciousness and self-determination”, but uprooting the roots of truly cannibalistic ideas, based on the same misanthropic principles and postulates as those that fueled German Nazism. It is technically possible to close all sorts of "sichi", "kurens" and other neo-Nazi cells, many of which have grown to monstrous proportions in recent years. It will be much more difficult to prevent them from resurrecting some time later - under the guise of completely peaceful organizations. Ukrainian neo-Nazism, which managed to preserve itself during the Soviet era, knows how to mimic and adapt in the most wonderful way.

That is why the work to eradicate it should by no means be superficial and hasty. Not only leaders, ideologists, propagandists of neo-Nazi organizations and formations, but every one of their members, without any exceptions, should go through the court and bear the most severe responsibility. Moreover, completely similar actions should be taken with regard to the participants of the “Euromaidan”, various “volunteers” who supported the ATO and similar individuals. They, it seems, did not take up arms (at least, many of them), but they were the driving force and “nutrient medium” of the entire nightmare that had been going on for 8 years both in the Donbass and in Ukraine itself. In no case should you limit yourself to “cutting off the tops”, because in this case, new poisonous “shoots” will appear very quickly. Another point of concern is the potential danger of returning to the local policies, as well as (sooner or later) and to the state authorities of those who are better and faster than others are able to "repaint" and "change shoes".

I have already spoken about this, and I will repeat it now: Ukraine is a country with centuries-old traditions of opportunism. It was also not enough that those who felt quite well after the coup of 2014 were at the helm of the new country - some in the most "unaffected", and some - outside of it. Convinced that the realities have changed in the most fundamental way, these slippery personalities will certainly try once again to crawl through to positions and new opportunities. All these attempts must be stopped in the most resolute way - otherwise what is being done today will again have to be repeated, and in a fairly near future.

And how it should be

As I have already allowed myself to assert above, the process of true denazification should begin with a colossal lawsuit that will forever send Ukrainian nationalism (in absolutely any forms and manifestations, with all the paraphernalia and symbols) to the dustbin of history, in the company of the NSDAP and other similar things. However, in parallel with this, it is necessary to form new authorities - from the legislative to the executive and judicial. Every single participant of the ATO-JFO, police and SBU officers must go through the most thorough investigation of their actions, and, in the absence of crimes on their conscience that “pull” them to full criminal responsibility, be subject to life-long disqualification. In any case, a ban on serving with weapons in hand. I will make a reservation - in this situation, exceptions are possible (one in tens of thousands approximately). After all, the same “conscripts” were sent to the ATO without asking their consent. The approach should be individual - so as not to repeat the vile things done in 20014-2015 by the “Maidan activists” themselves, who dispersed and “illustrated” all the “power structures”.

Be that as it may, the new country will urgently need the People's Militia and the People's Army. It is they who will have to bear the brunt of the struggle both with the nationalist underground supported by the West (and it will certainly be - no need to build illusions), and with that monstrous banditry and the shaft of ordinary criminality, which are already generated by the insane actions of the agonizing Kiev junta. However, with the police, everything can be quite simple. During the period I mentioned above, just for “service to Yanukovych”, such a number of its employees of all levels were thrown out into the street, which would be enough to create at least the core of new law enforcement agencies.

It will be more difficult with the Security Service - there is practically no “personnel reserve” there. Otherwise, how to explain the "sleeping" two "Maidans" - 2004 and 2014? Either sheer unprofessionalism or deliberate sabotage. Bearing this in mind, as well as the fact that in 2013-2014 it was the police that were, in fact, the only real force that opposed the coup d'état to the last, perhaps we should think about creating a structure with very broad powers similar to the NKVD. With the army, whose generals and senior officers first withdrew themselves from preventing an unconstitutional coup, but then moved together to kill their fellow citizens in the ATO, the personnel situation is approximately the same as with the SBU. But even here, presumably, a solution can be found - however, only with significant support from Russia. There will certainly be many professionals in the civil authorities who are not “covered up” in the crimes of the current regime and will agree to continue working under the new government.

As for the "deputy corps", and starting with those "people's deputies" who sat in the Verkhovna Rada in 2013-2014, they should be thrown out of politics once and for all. Those few who really tried to resist the Maidan and the civil war were either destroyed or forced to flee to Russia. The rest, pretending to be “opposition” for years, did absolutely nothing either to stop the tragedy of Donbass or to stop the process of the country’s slipping towards Nazism. Perhaps they did not vote for particularly odious laws, but they did not resign their parliamentary powers in protest against them. The old "political elite" of Ukraine, which allowed the Nazis and Bandera to come to power, should go into the past forever, as having proved its absolute inconsistency. It is necessary to create completely new political parties and social movements, the purpose of which will be precisely the re-education of the "broad masses of the population", and, above all, young people, in the spirit of denazification. Alas, after 30 years of "nezalezhnosti", and especially the last eight years of unbridled Nazi-Russophobic propaganda, the work will be hellish. But it needs to be done.

Special mention should be made of those personalities who bear the proud title of "oligarchs" in Ukraine. As a matter of fact, they, albeit indirectly (and where - in the most direct way), are involved both in the “Maidan” coup d'état and in the atrocities of the regime established in the country as a result. All their assets should be nationalized, and the funds that can be confiscated should be used to eliminate the consequences of the war in Donbass and the inevitable destruction that is taking place now. An attempt to “negotiate” with them, or, moreover, “use it in their own interests,” would be Moscow’s biggest mistake, which could lead to the most deplorable consequences. By definition, there should not be any "oligarchs" with enormous financial and organizational capabilities in the new country - otherwise, they will inevitably start trying to reformat both the government and the whole country for their own "selfish" interests. And it is far from certain that these attempts will be unsuccessful.

Questions of the administrative-territorial division of the new state (which would be best suited to the beautiful name of Little Russia), its federalization, and so on - these are technical issues. They, of course, quite realistic to solve with the proper participation of Russia, which is destined to be long. “Of course” and in the shortest possible time everything will not settle down here. And it is very important to understand this even before the corresponding processes are launched. At the same time, it should be remembered that the cornerstone here must certainly be the same denazification promised by Vladimir Vladimirovich, without which the rest completely loses its meaning. This process, which after the surrender and disarmament of the Armed Forces of Ukraine must be carried out by forces, for the most part, of local personnel, is destined to become very long. And the toughest. Otherwise it's impossible.
Ctrl Enter
Noticed oshЫbku Highlight text and press. Ctrl + Enter
Reporterin Yandex News
Reporterin Yandex Zen
19 comments
Information
Dear reader, to leave comments on the publication, you must sign in.