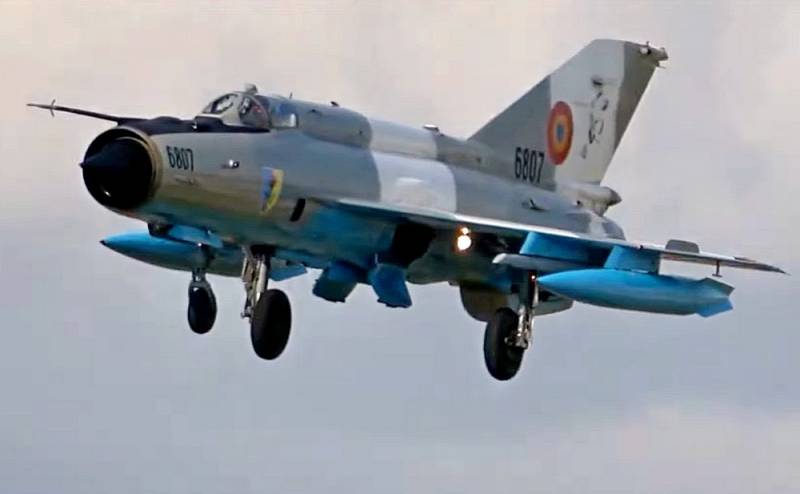 One of the most important areas of attack of the Russian Defense Ministry during the operation to denazify Ukraine is the southwestern one. Russian troops are already in the Nikolaev and Odessa regions, gaining control over which means a strategic defeat for Kyiv due to the loss of access to the Black Sea. Thereafter economic the collapse of the Square becomes inevitable in any further scenario. By an amazing coincidence, it was here, in the south of the Odessa region, that very mysterious events unfolded in the last couple of days.


On the evening of March 2, 2022, the MiG-21 Lancer fighter of the Romanian Air Force took off from the 57th air base named after Mihail Kogalniceanu to conduct combat patrols along its borders, but after 13 minutes communication with it was lost. The details of the incident are unknown, but it is established that the Romanian combat aircraft definitely died. An IAR-330 Puma rescue helicopter was sent to search for the fighter, but 40 minutes after the takeoff, it also disappeared. Soon, the flaming wreckage of a rotorcraft was discovered on the coast. All seven people on board were killed.


Yes, the evening did not work out for the Romanian Air Force and Navy, which lost two aircraft at once with a difference of several hours. But then the most interesting begins. Is it a coincidence? Who is to blame for the death of a fighter jet and a rescue helicopter with all the people on board?

On this occasion, there are at least 3 versions that deserve some discussion.

It is known for certain that the commander of the rescue helicopter managed to inform the base that the weather conditions in the search area were very difficult. The video of the burning wreckage of the IAR-330 Puma shows how strong the wind is. It is suggested that the commander could not cope with the control and catch on the blade of a nearby wind generator, which led to a further catastrophe with human casualties.

The version is quite plausible, but it does not explain the previous death of the fighter. It is unlikely that the Romanian Air Force MiG-21 Lancer flew at such a low altitude that it could hurt something. However, nothing can be ruled out.
Meanwhile, there are other hypotheses of what happened.

As you know, the Russian Defense Ministry is currently conducting a large-scale military operation, which, in particular, involves taking control over the entire Sea of ​​\uXNUMXb\uXNUMXbAzov and the Black Sea. The Russian Navy has concentrated in the Black Sea a large group of large landing ships (BDK), which is called upon to guard the flagship missile cruiser "Moskva". This well-armed Russian ship goes where it wants and does what is necessary, despite boorish advice to go to hell. The Ministry of Defense of the Russian Federation, saving the lives of our marines, is not in a hurry to land troops on the coast. First, Russian aviation must identify and suppress all air defense systems, carriers of the Neptune anti-ship missiles, as well as the last Ukrainian combat aircraft.

Of course, the Ukrainian propagandists did not miss the opportunity to accuse the Russian side of destroying the Romanian aircraft. However, this theoretical assumption is completely refuted by practice.

At first, Romanian aircraft were destroyed over the border area of ​​Romania, not Ukraine. Russia has no interest in dragging a NATO member country into the conflict, so surely "Moscow" would take all measures to try to expel the MiG-21 Lancer by persuasion before resorting to extreme measures.

Secondly, if a Romanian fighter, and even more so a rescue helicopter, were destroyed by a "Russian ship", you can imagine what kind of hysteria would be raised in the West. The anti-Russian information campaign would receive maximum support, and the North Atlantic Alliance would have a wonderful opportunity to start acting actively against our country, up to military methods. However, this does not happen. I wonder why?

Not far from Odessa, the 14th radio engineering brigade named after Bohdan Khmelnitsky of the Air Command "South" of the Ukrainian Air Force is located, and there are also three missile divisions of the S-300PS air defense system of the 160th anti-aircraft missile brigade of the Armed Forces of Ukraine. Apparently, they are not all destroyed yet. In addition, the so-called terodefenders had a lot of American-made Stinger MANPADS in their hands.

Considering the general level of their training, the assumption looks much more likely that they shot down a Soviet-made Romanian fighter, and then a rescue helicopter that flew to its rescue, mistaking it for Russian ones.

Undoubtedly, a place in Hell has long been prepared for Ukrainian anti-aircraft gunners, next to Ukrainian artillerymen. The gloomy silence of Bucharest on this issue is a very eloquent confirmation of this hypothesis. For Romanians, against the backdrop of the Russian operation on the territory of Ukraine, it is extremely unprofitable to recognize this fact, thereby substituting the “allied” Kyiv. In addition, it is very likely that the US and Europe asked Bucharest to turn a blind eye to this incident, perhaps even promising some kind of material compensation.
Ctrl Enter
Noticed oshЫbku Highlight text and press. Ctrl + Enter
Reporterin Yandex News
Reporterin Yandex Zen
29 comments
Information
Dear reader, to leave comments on the publication, you must sign in.